The axe and human civilisation

The use and abuse of wood is a major theme in the history of humankind according to a new book, A Forest Journey

The axe and human civilisation 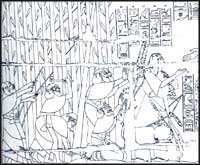 AT THE rate at which the world's forests are disappearing, it would appear that the price for human development is the destruction of forests. This is true wherever civilisations have risen and flourished, observes author and amateur explorer John Perlin, in his new book A Forest Journey, brought out by Harvard University Press.

The work chronicles humankind's assault on the world's forests, a phenomenon seen as "part of the same cycle, begun thousands of years ago". Every "Old World" starts out as virgin land that attracts human settlement. Subsequent exploitation by human beings wears out the land, forcing them to move on to their next "New World". This quest for new frontiers, which many have thought was peculiar to the American experience, is but a repetition of an age-old process, which began in Mesopotamia more than 5,000 years ago and has continued through ancient Greece, Rome, Venice and England, to the present day.

A Forest Journey takes as its starting point just one resource -- wood, which is the principal building material and fuel of past societies. With a broad sweep across time and space, Perlin shows how western societies' need for new sources of wood triggered large population movements. In fact, the author argues that the quest for wood led to the colonisation process in the ancient and medieval worlds. And, wood scarcities prompted many technological advances.

Pliny, the great Roman natural historian, felt that "wood was indispensable for carrying on life". Those living in later times and in sharply differing cultures also stressed the importance of wood for their societies. Writes Perlin, "Ibn Khaldun, in the 14th century, discussed the crucial role wood played in the world of Islam. 'God made all created things useful for man,' wrote Khaldun in the Muqaddimah, his major work, 'so as to supply his necessities and needs. Trees belong among these things. They have innumerable uses to everybody. Wood gives humanity its fuel to make fires, which it needs to survive. Bedouins use wood for tent poles and pegs, for camel litters for their women, and for the lances, bows and arrows, while sedentary people use wood for their houses, for the locks for their doors, and chairs to sit on.' Working in wood was so crucial for the medieval Moslem world that, Khaldun concluded, the carpenter 'is necessary to civilisation'."
Mass migrations have often been prompted by the urgent need to find new sources of wood, observes Perlin. The abundant forests of Gaul and Spain led the Romans to colonise these regions around the 3rd century BC. They needed the wood to fuel their burgeoning industries and their baths and to build their houses. Similarly, North America with its virgin forests proved a powerful magnet for marginalised, wood-starved communities in England and Europe in the 17th and 18th centuries.

Scarcities triggered major technological changes and advances. The late Bronze Age metallurgists on the island of Cyprus were forced by crippling wood shortages to develop many ingenious methods of conserving energy: For instance, they recycled scrap bronze to reduce their consumption of wood. The search for cheaper and more sustainable sources of energy led Greek and Roman architects to exploit solar energy. And, thousands of years later, timber scarcity forced the English to enter the fossil fuel era, substituting coal for wood as their principal fuel. In the USA, coal did not overtake wood as fuel until 1887.
Wood scarcities forced governments to protect and regulate the use of this precious resource. Hammurabi the Great, codifier of laws in ancient Babylon, saw to it that government officials regulated the felling of timber. In wood-scarce Delos, during the Hellenistic era, the authorities insisted the distribution of such a valuable source of energy should not be controlled by a few, powerful, fuel merchants.

Roman authorities, seeking to ensure the availability of firewood in sufficient quantity to the residents of Rome, commissioned an entire fleet of ships for the sole purpose of importing wood from the dense forests of France, Spain and North Africa. The Venetian senate of the 15th and 16th centuries passed a number of laws aimed at protecting its dwindling forests, as did the British Parliament in the 16th and 17th centuries.

Perlin also relates how wood transformed the economies of several nations. Until 1900 BC, Crete was merely another Aegean island, but then its rich forests began attracting traders from deforested Mesopotamia. The commerce in wood between Crete and the Near East injected such wealth into the Cretan economy, the island kingdom rapidly rose to become one of the Mediterranean's most powerful states.

Conversely, wood shortages brought economic and social decline in its wake and the ancient Greek states, for example, became subservient to wood-rich Macedonia once they ran through their own forests. But England forestalled its decline in similar circumstances by developing coal as an alternate fuel.

Throughout history, deforestation made vast stretches of land waste and left these lands a legacy of drought and famine. In turn, this led to their downfall -- even of those that were once powerful and prosperous societies. Stripped of its forest cover, the magnificent civilisation of Knossos declined and could never again recapture its Golden Age, when it held sway over much of the eastern Mediterranean.

The erosion of topsoil on deforested hillsides also caused a sharp decline in agricultural production in the great Mycenean kingdoms of Bronze Age Greece, resulting in reduced crop yields, impoverishment and depopulation. Rome, too, came to depend on other lands for food because its own farmlands were cleared of the tree cover that had nourished the soil for ages.


Throughout history, many powerful voices sounded the dangers of deforestation. Plato eloquently warned the Athenians in his Critias of its dangers and Cato taught the Romans, through his writings, the best ways to nurture their scarce wood supplies. Many years later, John Evelyn, a leading citizen of 17th century England, wrote his famous conservation tract, Sylvia, and campaigned to save the few remaining forests. And, Perlin describes how the destruction of the great eastern forests of the Americas served as a stimulus for the development of American ecological concern.

But A Forest Journey is more than just a vision of the apocalypse. By plotting the predictable cycle of the growth and decline of human societies, Perlin seems to urge human society to learn from past mistakes and "break out of the cycle of deforestation and land degradation that undermined earlier civilisations."

Perlin's work, however, cannot be taken as serious history for more than one reason. While drawing our attention to wood, he seems to miss it for the trees. A serious flaw in the work is that human beings do not figure very much in his narrative, unless they were exalted personalities or rulers. Forests were destroyed more because of the greed of the powerful and always at the expense of local communities.

People did protest against the destruction of their forests and Perlin gives an example from medieval Sussex. But he does not give enough importance in his narrative to communities that have traditionally guarded their forests. Is it because he believes, like Aristotle, that "the conservation of wood was a matter too important to be left to voluntary compliance?" Aristotle had recommended that the state employ magistrates to "watch over the forest".

The problem, perhaps, lies in the fact that the author has chosen to confine himself largely to western civilisation. His account stops with a chapter on USA in the late 18th century. In fact, so narrow is his approach, he does not even discuss the role that greed for wood played in the European colonisation of Asia and Africa.

While the West was creating its own crisis through overconsumption, civilisations based on conservation had flourished in China and India. J A Mandelslo, a European travelling in India in the 17th century, had this to say about Goa, "The houses are all made of straw, and very small, having no opening except a low and narrow doorway. The furniture consists of a few rush mats, on which the people lie down to sleep." The lesson here is that people in Goa probably preferred to protect its forests and, instead, built houses of straw because they appreciated the values of conservation.

Even in the West, many communities had rules for conserving forests, according to Fernand Braudel, the French historian. In The Structures of Everyday Life, Braudel tells us that as late as the 18th century, in parts of Europe "a village house could only be built or repaired with the authorisation of the community or the seigneurial authority -- which controlled access to the stone or clay quarries and to the forests where the wood for building grew." Perlin misses all these valuable insights in his otherwise interesting account, by reducing history to a saga of kings and nobles.