The day the sea raged in

The day the sea raged in 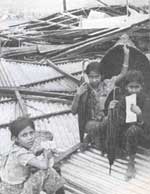 There was something about the sea that sent a shiver through Kamal Hossain. The colour of the water was not the usual emerald green but had a muddier hue -- something unusual for the Bay of Bengal in April. There was also a lot of foam in the water. The day's catch had been bad, as if all the fish in the bay had fled. When Hossain and his fellow fishermen reached Baherchhara village on the Teknaf coast, after hauling in their nets earlier than usual, strong winds chopped across the area and the sky filled with deep, ominous clouds.

At home, Hossain heard the radio warnings of a cyclone rushing towards Bangladesh at 210 km per hour. It was April 29, to the day 3 years ago when a killer cyclone, one of the worst to hit the country, mauled the entire coastline of Bangladesh -- claiming a toll of 138,000 lives and property worth $2.5 billion.

It was a hard choice for Hossain -- whether to stay put in his straw-and-bamboo home or to take refuge in the nearby cyclone shelter. Many of his neighbours were against evacuation, hoping that the storm might spare their little fishing village. But the hard lesson learnt from the "drill" of the '91 cyclone counselled otherwise. There were many others of the same mind as Hossain, and thousands took shelter in the concrete structures on stilts, built mostly after the '91 cyclone. Its fury had taught the people not to take radio alerts lightly, and that the thick concrete shelters were their only bastions against one of Nature's most invincible and unforgiving elemental forces.

When the first warnings of the cyclone were being broadcast, Dhaka was panting for life in the stifling heat of April. However, a different kind of storm was blowing across the political scene on the 29th. Speculation was rife in the capital about whether the opposition would return to the Jatiya Sangsad (parliament) after walking out of it 56 days ago.

On the same day, a group of NGOs involved in disaster management were hosting a seminar in the Dhanmandi area in Dhaka to observe the 3rd anniversary of the '91 cyclone. The topic of the seminar was: Are You Prepared for the Cyclone Next Time? Little did the organisers know that a cyclone, spilling out of the ocean southeast of the Andaman Islands, was on the doorstep to try Bangladesh's readiness to cope with yet another disaster. In Teknaf, some 400 km southeast of the capital, Kamal Hossain discussed the approaching cyclone with his relatives and neighbours and decided to move out to the shelter.


According to meteorologists, the peculiar geographical location of Bangladesh and the inverted funnel-shaped bay is particularly prone to cyclones. And due to the high density of the coastal population, even a minor storm can wreak major havoc. The lesson was well learnt: this time, the human cost was minimised as Bangladesh swung effectively into action like a veteran soldier to combat the impending danger.

The prime minister, Begum Khaleda Zia, immediately summoned an emergency cabinet meeting to review the situation and take immediate steps. The 30,000-strong volunteer force of the Cyclone Preparedness Programme (CPP) of the Bangladesh Red Crescent Society started a massive operation to evacuate some of the one million villages on the coast and on off-shore islands.

The state-owned Bangladesh Television suspended its normal programmes to broadcast storm warnings. Radio Bangladesh aired special cyclone bulletins in local dialects on evacuation procedures and safety measures. The ministry of disaster management went on an overdrive, amassing supplies for post-cyclone relief. NGOs mobilised their volunteers to assist the government in evacuation and in the post-cyclone rescue operation. A round-the-clock cell was set up at the Prime Minister's Office to coordinate the rescue and relief operations.

The coastal districts of Chittagong and Cox's Bazar in the southeast went on red alert by the evening of the 30th. In the port town of Chittagong, people queued up in front of shops to stock essential stuff before the main body of the storm hit the coast. All ships and naval vessels were docked in safe areas. The 75-km-wide cyclone had meanwhile moved closer to land with a wind speed of up to 210 km per hour.

In Teknaf, villagers hurried to the nearby cyclone shelters as drizzles began to spray the long trains of people hurrying in from remote areas. The CPP volunteers were in constant touch with their headquarters in Dhaka over the wireless and provided a sort of running commentary on the approaching storm.

The cyclone struck the Bangladesh coast south of Cox's Bazar at 4 pm on May 2, followed by devastation. It turned into a depression over the land before fizzling out over the Arakan province of Myanmar. The cyclone killed 223 people -- a figure astonishingly small compared to the thousands lost in the 1991 juggernaut. "The difference from 1991 was dramatic," says Faruq Chaudhuri of the Bangladesh Rural Advancement Committee, an NGO that has worked with coastal disaster management committees since 1991, "Earlier, people would be in a state of shock after a cyclone, digging through the mud to locate family members washed away by the waves. This time, they were more worried about the damage to property."

The storm caused massive destruction to property -- the preliminary government estimate put damages at Taka 525 crore (about US $131 million). The entire coastal area from Cox's Bazar to Teknaf was totalled -- the storm had blown off thatched houses, razed crop and capsized fishing boats. Only the cyclone shelters stood on their concrete stilts amid the vast tracts of flattened cropland littered with debris of dwellings and trees. Even the dense forest of Cox's Bazar hills were shorn of leaves and bark.

The condition of some 238,000 Rohingya storm refugees lodged in 18 camps was miserable as the storm razed almost all their shanties to the ground. People were trying to rebuild their houses by collecting bits and pieces from the spoils of the storm. "It is amazing," exclaimed Kamal, safe in his shelter, "I would have never thought that these structures could stand up to the rush of the wind and the rain."

The Storm Warning Centre of the Bangladesh Meteorological Department came in for a lot of praise from disaster managers and the common people alike for having predicted the course of the fury more than 50 hours before it hit the country. Mohammed Sazedur Rehman, Deputy Director of the Centre, said that correct forecasting by the "storm trackers" provided enough time for evacuation, saving millions of lives.

"We took great care in calculating the course of the storm, which was in variance with the courses shown in the weather bulletins of BBC, CNN and other international television networks," Rahman claims. "It was a big gamble and thank good we were proved correct." Much of the credit also goes to the CPP volunteers of the Bangladesh Red Crescent Society, who had fanned out in the vulnerable areas to encourage people to evacuate.

The UNICEF representative in Dhaka, Rolf C Carriere, later said that "the cyclone preparedness was wonderful. Although much damage was caused to properties and structures, a lot of lives have been saved. Bangladesh's efforts to mitigate the impact of the calamity is worth noticing." After a visit to the affected areas, the US ambassador to Dhaka, David N Merill, remarked, "Bangladesh substantially mitigated the cyclone's impact by mobilising the government and the NGOs before the cyclone arrived and by evacuating hundreds of thousands of people to safer areas."


However, Kamal Hossain was one among a few lucky ones who could get into the cyclone shelter with his family. There were many more who had to return home as the inadequate space inside the shelters gave out. People then tried other means of safety like tying themselves to coconut trees or moving to rooftops. The 1,470 cyclone shelters dotting the coastal belt of Bangladesh could hardly cover some 600,000 people, while another 4,600,000 people in the 46 high risk areas had to do without even the minimum safety arrangements.

The Bangladesh Red Crescent Society had built 62 shelters during the 80s, while NGOs like Caritas, World Vision and Care-Bangladesh also constructed another 61 shelter-cum-schools with substantial international aid. The new cyclone shelters were built in a way that these could double as schools, mosques and community centres. Experts estimate that another 1,500 shelters would be required to accommodate all the people living within the high risk zone.

According to government reports, a good part of a 4,800-km-long coastal embankment damaged in the '91 cyclone is yet to be repaired. The breaches have proved costly. The breach in the embankment in Cox's Bazar had damaged the inland shrimp farming, thus depriving the country an estimated $26 million in foreign exchange. A massive afforestation programme initiated in '91 to create a "green belt" along a 100-km stretch of the coast is yet incomplete. These areas need immediate action to prevent further damage in the future.

Today, many believe that Bangladesh, like a phoenix, is learning to live with disasters and starting life anew from the ruins. When calamities are inevitable there is no point trying to run away from it. Living for renewal makes more sense.

The final note was sounded by Abdul Hashem, a 35-year-old fisherman from St Martin's Island, off the southeast tip of the country, "We do not want that you keep on giving us food and other relief materials. Just help us so that we can work harder...We now know how to cope with disasters."