Sewage disposal is a big problem in Mumbai. The blueprint for a project to improve waste management in the city is ready but its effectiveness is being hotly contested 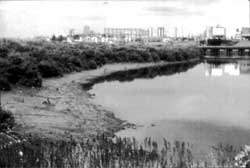 the Bombay Sewage Disposal Project (bsdp) is in deep waters. The Rs 1,000 crore project, carried through with an assistance of us $192 million from the World Bank, is facing the wrath of environmentalists and fisherfolks in the city, who contend that the project is not environment-friendly. The bsdp is planning to improve upon the present sewerage system, the basic structure of which was laid down as early as 1905 and continues to remain the same.

Today, there is a consensus over the pathetic state of the city's sewerage system. Vijay Joshi, head of the Nagpur-based National Environmental Engineering Research Institute (neeri) says, "The present dissolved oxygen (do) levels in considerable portions of the creeks and coast lines around Mumbai show marked depletion, thus indicating adverse impact of the coastal discharges on marine life." Expounding this, he adds, "All aquatic life requires oxygen in water to survive. This oxygen level is called do and its adequate level in coastal water is a key parameter for the sustenance of a healthy ecosystem. Once the do is taken away, the species which need higher levels of oxygen cannot survive."

The fisherfolk also point to the contamination of marine life in Mumbai's coasts and creeks. Bhai Bandarkar, president of the Maharashtra Machhimar Kriti Samiti, the local fisherfolks' organisation, and an executive member of the national fishworkers forum, says, "Mumbai Municipal Corporation (mmc) is the largest creator of pollution in Mumbai. The sewage in Mumbai goes untreated into the sea and the creeks around the city, thus poisoning them and the fish. The poisoning of coastal waters has led to the death of many varieties of fish. Important fish species like ravas and boi have been wiped out. Today, many varieties of prawns, crabs, black prawns, sardines, boi, vekhnu, chalbat, tamb and other varieties of fish are almost wiped out on the coastal lines." This present situation is telling heavily on the fisherfolk. Namdeo Devji Tare, a Mahim-based fisherfolk owning small rowing boats said, "Generally we can row in the range of two to three km with our small rowing boats depending upon the tidal conditions. The small rowers have been worst affected by the pollution of coastal water. Now the fish on the coasts are dying. We do not even get the once abundant oysters on the coasts. At times the fish we catch is barely enough for a meal, leave alone its sale." Segregation of sewage before dis posal in terms of industrial and domestic sewage is not being done and there is hardly any treatment of sewage before disposal. All this affects coastal waters adversely. Inspite of the present condition of the Mumbai sewage system and its environmental implications, there are strong differences between the environmentalists and the mmc over the implementation of bsdp.


The implementation of the project has encouraged a lot of debate and several proposals are being mooted. The bsdp will divide Mumbai into seven zones. Sewage from three zones, viz, Colaba, Mahim and Worli, will be taken out through marine outfalls at Worli and Bandra, while sewage from Ghatkopar and Bhandup zones will be taken out through aerated lagoons and that from Malad and Versova zones through a proposed marine outfall and an aerated lagoon. Environmentalists in Mumbai are far from convinced by this proposal. Debi Goenka of Mumbai Environmental Action Group says, "The project does not propose a treatment of sewage. It is only released in deep sea. The project is not a solution but only amounts to firefighting." I C Gandhi, deputy municipal commissioner (Engineering), differs, while adding that "the sewage will not be given any biological treatment, but grit and floating material will be removed through a degritting and screening facility. Marine outfalls will achieve the effects of treatment since they will have an impact of dispersion, dilution and decay on the sewage given the higher assimilative capacity of the sea at the deeper levels."

Another point of contention between environmentalists and the mmc has been the length of the marine outfalls. Environmentalists say that the three km-long marine outfalls to be constructed at Bandra and Worli will not be enough to keep the sewage away. This is in agreement with the study conducted by neeri which indicates that only a five km-long outfall with possible primary and secondary treatment of the sewage would bring the colliform level to the desired standards. Gandhi, however, claims that the operationalisation of the project will take shape in two phases. The three km-long outfall will be built in the first phase, whose length will be extended if neccessary, after a study of effects of sewage on water quality.

Fisherfolk, however, are not convinced with the project and look at it with grave suspicion. Bandarkar says, "Whether the sewage is dumped at three km or further, it will anyway contaminate the water with bacteria, affecting the health of the fisherfolk, who are often required to jump into the sea." He also fears that the chemical treatment at the aerated lagoons will have even more adverse effect on the fish. Dilip Laxman Dev, another owner of a small rowing boat confirms Bandarkar's fears and says, "We fish in the two to two-and-a-half km water, that is, close to where the mmc suggests the dumping of the sewage".

Environmentalists also charge that the bsdp settles for a conventional rather than innovative solution. According to them, the basic concept of waste minimisation, reuse and recycling has not been taken care of. The conventional sewage management system will not work here. Instead, creative solutions should be sought. Member of the environmental assessment committee for the bsdp and the editor of Sanctuary Bittu Sahgal, also argues for alternatives which advocate recycling. He says, "A flush recycling water from the washbasin could be tried out. It is necessary to replace wasteful systems." Goenka suggests, "Water is severely subsidised. There is no incentive to save water. Campaign to conserve water in Mumbai should be taken up by the mmc". Rupande Pannalal, having a grassroot level experience of working in slums, argues for alternatives from a different perspective. She says, "People in slums use minimal water during defecating, generating least sewage. Higher quantities of sewage is actually generated by residents in the buildings of upper and middle class areas, who have a 24-hour water supply. Also, most buildings have safety tanks through which sewage can be carried to mmc sewer lines. These safety tanks can be used for generation of biogas by the residents. The government advocates usage of sewage for biogas generation in rural areas. Why can't the same be done in the cities?"

Environmentalists also argue for the search of new alternatives apart from improvement in the present system. There is concern regarding untreated industrial effluents coming to the Mumbai coasts from petroleum refineries in Trombay and chemical industries in Nagothane. The possibility of bsdp being able to control this is also being discussed. Bandarkar says, "According to the law, owner of a factory throwing untreated industrial wastes is liable to be jailed if the offence is committed thrice. However, no industrialist has been sent to jail on this account till date... sewage should be recyled by using it to make compost or a gas plant." He concludes with a warning to mmc that "it is high time we are treated like human beings". If bsdp continue with its ways, "we will wage a movement against it".


Perhaps the conflicting perspectives on the solutions to the problem of sewage disposal has a potential to seek creative alternatives. However, this would mean a deep commitment to the concept of "partners in development" from the mmc. As Vijay Kanhere, a researcher and a member of the Occupational Health and Safety Centre says, "No one asks the people what they want; their opinions are not valued by the bureaucracy. People should feel that they are genuinely consulted. That is the need for today." He gives an example of the mmc's attitude towards the sewage workers. He says, "After a long agitation, the mmc has agreed to bring safety equipments for the sewage workers. However, the workers were not consulted. Today the workers do not use it because the equipments have not been adapted to Indian sewage conditions. It is thus, not a question of money but a question of attitude."