The face of extinction

Species extinction is real, and not a scare. But the solutions conservationsists provide are simplistic and even more scary

The face of extinction 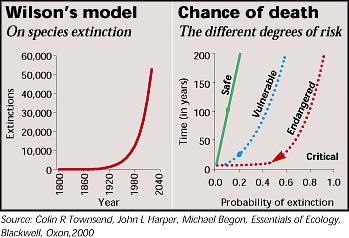 The story of tiny Easter Island in the Pacific Ocean is the perfect parable for extinction. This 64 square mile island had fertile soil and a mild climate. Humans settled here in 400 ad and according to archaeologists, their numbers reached as high as 20,000. But when Dutch travellers reached there in 1722, found a grassy wasteland with hundreds of very large sculptures strewn all over. What had happened?

At its peak, Easter Islands' dense forests had hundreds of massive endemic palms. The islanders used these trees to make fishing boats and to drag, position and erect the huge sculptures the Dutch travellers saw. Soon, the islanders had cut one palm too many; available trees had shrunk to stumps. Unable to make canoes, they stopped going to the sea. By 1400 ad, fishing stopped. The people began eating the island's animals: porpoises, seabirds, land birds, rats and seals. The delicacies were cooked in ovens fired by wood from the forests. As meals increased, animals and forests vanished. The disappearance of birds bought pollination to a halt. Then, cannibalism became the islander's only option. They ate and killed each other and turned the island bare again in just 1,400 years. The Easter Islands' palm tree now sits inside a museum -- the worst fall-out of a species going extinct.
Yes, species extinction is a reality. Arguably the current generation of humans is unlikely to emulate the complete ecological annihilation on Easter Island. However, ecologists warn that if extinction continues at the current pace it will attain alarming levels. In fact, some even describe the current spell as the Sixth Extinction. They refer to the five mass extinctions spells before. These are:

• The Ordovician period, 440 million years ago -- 50 per cent of animal families were wiped out then

• The Devonian period, 360 million years back-- 30 per cent of all animal families perished

• The Permian period, 250 million years ago -- 50 per cent of animal families, including 95 per cent of marine species went extinct

• The Triassic, 210 million years ago -- 35 per cent animal families wiped out

These spells took away 99 per cent of all species to ever inhabit the Earth. So what? The world doesn't look so bad after such mayhem. But hang on: our planet takes time to recover:

How calamitous is the current extinction spell? Quite grave. The ecologist E O Wilson surmised, in1993, that we lose 30,000 species annually (see graph: Wilson's model). Also, the current spell is different: this is the first time extinction has been caused largely by one species -- humans -- and not physical phenomena, as in the past. The ecologist Niles Elridge suggests we divide the Sixth Extinction into two discrete phases. The first began when humans began to disperse to different parts of the world about 100,000 years ago. Phase two began about 10,000 years ago, when we turned to agriculture.


Extinction refers to the complete wipe out of all specimens or populations of a species from the Earth. While arriving at a definition is simple, the way the term is deployed is replete with contradictions and complexities. For example, many conservationists use the terms 'rare species' and 'species at risk' interchangeably. But as Colin R Townsend puts it, "That every species is at the risk of extinction is rare but not all rare species are at risk."

The confusion stems from two problems. One, mathematical models are used to explain how many species exist today. Such models are based on limited -- very limited -- knowledge of the species that exist today. Indeed, according to some, only one-hundreth of existing species are known to humankind. Moreover, conclusions about how changes in forests -- area, invasions and fragmentations -- affect species are also based on mathematical models, and so too theoretical. The second problem arises from using species as the basic unit of evaluating life forms. Many scientists, particularly geneticists, argue this is a faulty method, based on concepts built up over the last century. They need to be updated with advances in genetics. Indeed, if one begins to review threatened genera or families, the picture changes quite dramatically. Evidently some families face only moderate risk even as some indidivudal species in them may be highly threatened. It's this lack of certainty that allows sceptics like Charles Lomborg to debunk the entire thesis of extinction as scare-mongering.


Conservation, an applied end of ecology, on the other hand, continues to further mangle this confusion with its own biases. When ecologists draw up direct links between human population increase over the past several hundred years and the exponential (modelled) extinction of species, the conservationist quickly concludes that population increase is the problem -- and not resource use. Read any standard ecology textbook and you will find graphs with two curves climbing up together rapidly over time -- human population increases and that of other species declines. Only in rare cases would a graph of increasing per capita resource use appear in such textbooks. This lack leads conservationists up the wrong alley: they look for simple answers to complex ecological systems. Take the case of protected area networks across the world. Research clearly shows that these vast areas do notionally protect large animals, but they definitely do not cover a far larger number of small animals and plants. In fact, studies clearly show that the vast stretches of protected tracts would have to be increased manifold (and populations living in dependence or in proximity removed) to protect smaller species.

The problem with taking the extinction 'scare' too far is that while theoreticians can afford to take a wide latitude with modelling, people whose existence are intertwined with the rest of the environment cannot model their lives on notions. This, the inhabitants of Easter Island did not learn in time.