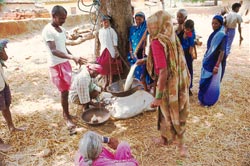 Which village is this? “Dongripara Gaon Ganrajya (Dongripara village republic),” is the innocent reply of 10-year-old Gopal Nag of Dongripara, anxiously waiting for October 18. It is his Gaon Ganrajya Diwas (village republic day). Much before he learnt the alphabets and knew about India’s Independence Day, Dongripara declared self-rule on this day in 1997. The imposing shilalekh (stone inscription) erected in the village square declares it a republic and empowers the gram sabha (village assembly) to be the highest governing body.

Geographically the fountainhead of many civilizations on the Mahanadi, officially not a village and by practice a republic. “I do not go to Dongripara. They don’t allow me to enter the village,” concedes D S Kunjam, Tehsildar of the Nagari Janpad Panchayat, whose department doesn’t recognise Dongripara as a village. Panchayat leaders also are wary of entering the villages. Dongripara’s biggest challenge was to be recognised as a village, and to have a stake on its surrounding forest and a tank.

Their freedom struggle started from here. Home to Halwa, Gond, and Kewat tribes, the livelihood of the residents was dependent on agriculture and collection of minor forest produce, strictly managed by the traditional system of governance. “The system ran perfectly and residents were reasonably prosperous until the akaal varsh (referring to famine of 1965),” says Nag. As dependence on forests grew, more and more conflicts between villagers and forest department were reported.

The Panchayati Raj Amendment Act of 1992 and subsequently the MP State Panchayat Adhiniyam of 1993 brought some hope for the villagers as it offloaded many government stakes on village resources. “We thought it would set everything right.” But the situation became worse with the panchayat levying all kinds of taxes to boost its income, say villagers. The conflict began when the panchayat impinged upon the nistar (traditional) rights of the villagers. It leased out the village pond for fishing rights to a contractor and allowed the public works department (PWD) to extract stones from the hill.

“The whole panchayati raj became the keep of the sarpanch,” says an agitated Sampat Lal Yadu, convener of the gram sabha. This gave birth to the gram sabha. First it closed the doors for government officials and took over the management of the dongri (hill) and the pond. The village constitution (perpetuated in the stone inscription) gives its citizens equal rights over all resources. Through a 10-member appointed van rakhwali samiti (forest protection committee), the gram sabha oversees the regeneration of the dongri. “Within ten years the green cover will come back,” assures Indra Nag, a member of the samiti. The gram sabha does community fishing and earns money for funding village development programmes. The PWD is not allowed to take even a single stone chip from the dongri.

The stone chips, still lying on the foothills, remain the witness to the birth of Dongripara republic on October 18, 1997. The powerful gram sabha now completely looks after the village affairs and implements decisions through an executive committee of ten members (five of them are women). As a conflict management strategy no decision is taken unless a consensus is reached. “If we do not reach a consensus, the issue is just scrapped,” says Aash Bai.

The movement has given the villagers two important things — community feeling and pride. “With our governance, they (government officials) talk to us on our terms,” says Mehtarani, remembering her arrest during initial days of the village’s fight with the PWD. “Village development is the only agenda of the gram sabha. We want to show the other villages that the path we chose for us was right,” says Shankar Nag.