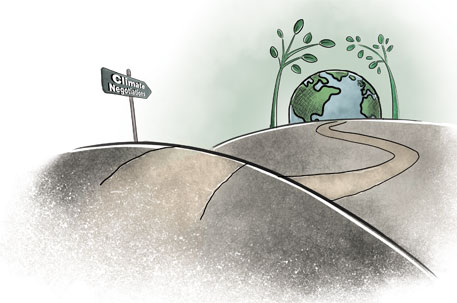 Hurtling towards a climate disaster, the world’s carbon dioxide (CO2) level reached 400 parts per million (ppm) in 2013 compared to the pre-industrial level of just 280 ppm.

To have a reasonably high probability of limiting global warming to under 2°C, the Intergovernmental Panel on Climate Change’s Fifth Assessment Report explains that the world has a carbon budget of 800 billion tonnes. The alarming reality is that we have already emitted 531 billion tonnes and are currently emitting close to 40 billion tonnes annually. At this rate, the remaining carbon budget is likely to get exhausted in 15-20 years, even if one considers some amount of emission cuts and transition to more energy- efficient technologies.

In the quest for growth at all costs, developing countries are following a carbon-intensive approach similar to the West. China has already overtaken the European Union (EU) in terms of per capita carbon emissions. While India’s per capita emission is still only a fraction of the US or even China, there is a lesson here: unless developing nations follow low-carbon growth, the world will end up doing what science has been warning us against—irreversible and catastrophic damage to the planet as a result of climate change.

In what can be seen as mighty global support and solidarity, an estimated 400,000 people got together in New York on September 21 for a “Climate March”. They were joined by tens of thousands across the world in over 2,000 events held in 150 countries, demanding decisive action on climate change.

At the onset of the New York Climate Summit on September 23, United Nations Secretary General Ban Ki-moon urged the world leaders to deliver “bold pledges” on how to tackle climate change. A lot was expected from this high-profile gathering of heads of nations and business leaders from 120 countries.

While there were a few noteworthy commitments—contribution of $1 billion by France to the Green Climate Fund (GCF), pledge to end forest loss by 2030 and EU’s pledge to reduce carbon emissions by 40 per cent below the 1990 levels— statements from many key players fell well below expectations. Rich countries like the United States, the United Kingdom, Canada and Australia failed to make any specific commitments to GCF, a financial mechanism under UN to help the developing countries address climate change. Statements from the leaders of Australia and Canada drew widespread criticism as neither country suggested any change in its historical stand of meagre emission cuts of five per cent and 17 per cent over the 2000 and 2005 levels respectively. For the first time, though, business groups announced coalitions to decide on carbon pricing.

Since the start of climate negotiations in 1992, there have been perceptional differences between the developed and developing nations. Even after two decades of global discussions, the world is yet to arrive at a comprehensive legal framework to address climate change. Some of the contentious issues in forging a global deal are listed below:

North-South divide: The West argues that the current political-economic reality cannot be equated to that of 1992 when UNFCCC came into existence. The huge economic differences between the developed North and the underdeveloped South were reflected in the form of principles of Equity and Common But Differentiated Responsibilities and Respective Capabilities in UNFCCC. Currently, the debate is centred on developed countries pushing for binding commitments for all and the developing countries advocating their right to growth.

Equity: This is one of the most tempestuous issues in climate negotiations. India worked hard to get equity in the climate agenda at the Doha Summit in 2012 against the wishes of the developed countries. But the mechanism to share the burden of climate change among countries remains contentious. Different models have been floated based on parameters such as responsibility, capability and development needs. India has put forth the argument that historical emissions should be the sole criterion of assessing equity.

On the lines of Warsaw Summit 2013, countries are expected to come up with “contributions” to prevent global warming beyond 2°C in the upcoming Peru Summit in December. This summit is expected to agree on an “ex-ante multilateral process” that can assess whether the contributions are in consonance with the target. It is hoped that countries would reach a consensus on indicators like per capita emissions, annual emissions or human development index that can operationalise equity. A reference framework to apply equity as suggested in Warsaw could find further momentum and acceptance. In Peru, more focus needs to be on adaptation, which has been a rather neglected issue in climate negotiations.

Following the recent New York Summit, Peru could witness more contributions by business groups and coalitions to decide on a global price for carbon. Generous contributions are anticipated from countries like the US, the UK, EU and Australia to GCF. They are also expected to address technology transfer to the developing countries. Issues like short-lived climate pollutants, such as hydrofluoro carbons and black carbon, are likely to find some space in the negotiations, as also the issue of deforestation. Peru has to deliver on concrete actions and tangible outcomes if a legal global framework on climate change is to be agreed upon in the Paris Summit in December 2015.

Leading up to the 21st yearly session of the Conference of the Parties (COP 21) in Paris is a series of events that should give an insight into what can be expected from the global climate deal (see ‘Action-packed year ahead’). With the World Conference on Disaster Risk Reduction, conference finalising the post-2015 sustainable development goals, conferences on ecosystem based adaptation and BRICS Summit focusing on renewable energy, it is going to be an exciting and packed year until the Paris Summit for climate negotiations. These will hopefully deliver on the challenges where past conferences have failed.