That's what Antarctica is called 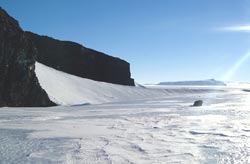 It is the earth's final frontier. Antarctica, a gigantic mass of ocean-encased rocky islands south of the Antarctic Circle, is the earth's southern-most continent. There is no place colder or drier. Stark but majestic, uncompromisingly bleak but alluring, 98 per cent of the continent's 14 million kilometres (km) is sheathed in ice that is about 2,200 metres (m) thick on an average. The South Pole lies near its centre. Temperatures hover below 0 and ice shelves dominate 11 per cent of its area.

The waters around Antarctica complement the hostility of its terrain and climate: they are some of the stormiest in the world. The meeting ground for warm currents from the Pacific, Atlantic and Indian oceans and cold currents from the Antarctic, they form a remarkable oceanic boundary ranging to the 50th parallel known as the Antarctic Convergence. Mammoth icebergs rule the waters south of the Convergence, and sub-polar aquatic life thrives in them.

Five times the size of India, Antarctica is asymmetrically divided by the 500-million-year old Trans-Antarctic Mountains into two sub-continents: East and West Antarctica. East Antarctica, a large Pre-Cambrian shield, was part of the ancient Gondwana landmass which existed a billion years ago. The landmass, which also included Africa, Australia, India and South America, broke apart about 65 million years ago.

In comparison, West Antarctica is younger. It was assimilated over the last 500 million years by the addition of continental fragments called microplates. Four of these microplates have been identified: Ellsworth Mountains, Antarctic Peninsula, Marie Byrd Land and an unnamed block of igneous rocks and metamorphosed sediments.

Of these, the 16,000-feet (ft) Ellsworth Mountains were formed 190 million years ago in the early Mesozoic era. The Andean Orogeny of late Mesozoic and early Cenozoic (about 60-80 million years ago) gave rise to the Antarctic Peninsula, which is made up of igneous rocks, volcanics and metamorphosed sediments. Though Antarctica is currently tectonically stable, recent volcanic rocks exist on Marie Byrd Land; west of the Trans-Antarctic Mountains lies the 3,794 m Mt Erebus, an active volcano.

The Gondwana sedimentary beds in the Trans-Antarctic Mountains, along with the metamorphic rocks of the Antarctic Peninsula, house most of the continent's plant and animal fossils. While the Palaeozoic rocks of the Trans-Antarctic Mountains hold Permian age plant remains, the younger rocks have fossils of Triassic reptiles and amphibians -- all pointing to a past in which the continent enjoyed milder, life-sustaining conditions. In 1982, fossil remains of a 40 million-year-old marsupial were dug out from the Antarctic Peninsula. Fossils of primitive fresh water amphibians and reptiles -- labyrinthodonts and codonts -- have been unearthed about 640 km from the South Pole.

Soil has no place in Antarctica's icy landscape. Soil cover -- extremely thin and patchy, alkaline and containing little or no humus -- is limited to just about 2-3 per cent of the continent's area. On the rest of the land, giant glaciers glide slowly towards the sea, into which they discharge immense flat-topped icebergs -- unique to Antarctica. Cold, arid deserts called 'dry valleys' or 'oases' dot the areas where glaciers have receded. Inland, the gently rolling surfaces of the ice cover, rugged mountains and nunataks (rocky outcrops) point to the nature of the sub-ice relief.