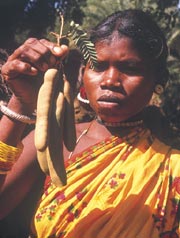 When it was launched, it was to be the model for forest-based rural development in tribal areas. Today, it is an example of what a government should not do. The Imli Andolan (Tamarind Campaign) was launched in February 1999 by the administration of the tribal-dominated Bastar district, which was then under Madhya Pradesh and is now in Chhattisgarh. The aim was to eliminate traders and middlemen from the trade of tamarind and other MFP. Self-help groups (SHGs) were created in villages through the panchayats and entrusted with collection. TRIFED (Tribal Cooperative Marketing Development Federation of India Ltd, an agency of the Union government's ministry of tribal welfare) agreed to buy and market all the produce.

The campaign was initiated by the then collector of Bastar, Pravir Krishn. He was moved when he caught a trader bartering salt for an MFP: "The salt bag was marked unfit for human and animal consumption. That was the worst form of exploitation I have ever seen," he told Down To Earth in 2000. The district administration estimated the tamarind trade to be worth Rs 1,000 crore in Bastar, of which tribals were losing about Rs 200 crore due to traders. Krishn and divisional forest officer (DFO) Sanjay Shukla then got together. "From my experience in Sarguja district and Shukla's experience in Mandla district, we knew that marketing had to be in place, otherwise all schemes would fail. We tied up with TRIFED and told them to post a general-manager level officer at Bastar who had the power to take quick decisions based on the fluctuating market," Krishn said.

After the SHGs worked, more groups were created directly under the district panchayat, and these were called the Van Dhan Samitis (VDSs). TRIFED advanced funds to these samitis to purchase tamarind from villagers and sell it to the federation. The idea was to eliminate the profiteering middlemen. The district administration enforced the Krishi Upaj Mandi (Agricultural Produce Marketing) Act, which forbids traders from buying notified produces outside the marketing yards where the produce is auctioned. The weekly haats were monopolised by the SHGs. An SHG in Aasna village earned Rs 25,000 in just 15 days.

The media saluted the scheme as the model for tribal welfare. Ram Prasad, now principal chief conservator of forests in Madhya Pradesh, had added a word of caution. He had argued that the system depended too heavily on the district administration. After a first year of profit, market reality struck in 2000-01. TRIFED had bought more than it could sell. The scheme ended in May 2001. Krishn and Shukla were transferred and TRIFED left in the cold. The Cooperative Central Bank is now attempting to locate the key functionaries of the now defunct VDSs to collect its money.

Today, TRIFED has 10,000 tonnes of tamarind in cold storages - and losses in crores of rupees. Most of this is two-year-old stock. The bills of cold storage and transportation are piling up, with compounded interest. There is also some 300 tonnes of harra, but there is hope of a distress sale there. Every other day, TRIFED brings out tender notices in newspapers calling bids for the tamarind. Nobody applies. In February, the next crop of tamarind would start coming into the market, further reducing TRIFED's chances of a distress sale.

Essentially, the problem was with pricing, and populism. An apex committee chaired by Krishn, with representatives from various departments, revised the rate at which samitis had to buy tamarind from the tribals. "Officers who didn't know rotten tamarind from quality stock were setting prices as if they knew the nitty-gritty of the MFP trade," says Kirit Doshi, senior journalist in Jagdalpur.

The prices set were much higher than the natural market rates. "You had people getting tamarind from neighbouring areas to sell it in Bastar because the rates were so high. It worked in the first year because the produce in the neighbouring areas wasn't that good. In the following years, there were bumper crops. They should have cut down the price to compensate. They didn't. The administration kept buying at rates of Rs 7 per kg when the market price was dropping below Rs 4 per kg," explains a trader in Jagdalpur.

A K Singh of Chhattisgarh's MFP Federation says the problem with a government scheme is that it can't be tailored to the market because the government can't cut down the price if the rate goes down. From 1998 to 2001, TRIFED had purchased tamarind worth Rs 50 crore. Traders bought tamarind from tribals in Orissa at Rs 2 a kg and sold it to TRIFED at Rs 6-8 per kg in 1999-2000. The market was aware that TRIFED was holding on to its stock. The more TRIFED waited for a better price, the further the price dropped.

Today, the situation is back to pre-Andolan ways. TRIFED is trying to reclaim the money it loaned to the samitis and has reportedly sent legal notices to some. N C Saxena, former secretary to the Planning Commission, says TRIFED did not develop market linkages outside the district, as it sold most of its produce to the wholesalers operating within the district. It managed to reduce the role of village buyer but failed to break the hold of wholesalers, who control storage and contacts with the outside markets.

P C Dalei, revenue commissioner of Bastar division, describes how the scheme turned sour when there were cases of crowds turning violent against officers. He also points to complaints of corruption among the VDSs, which didn't purchase at the price they had been offered by TRIFED. M A Iqbal, a social activist in Jagdalpur, questions the wisdom of creating new samitis when there was already a cooperative structure in place to purchase tendu leaves. Doshi is very bitter about the media: "Journalists came in hordes to Jagdalpur at Pravir Krishn's invitation and wrote what they were told. They made traders look like villains without any appreciation of how a trader gathers market intelligence and knows when to get rid of stock, keeping the money rotating." A source at TRIFED refuses to blame traders for Imli Andolan's failure, saying that traders also suffered when the market crashed.

In celebration of the first anniversary of the Imli Andolan, a park was built in front of the TRIFED office within the collectorate premises at Jagdalpur, headquarters of Bastar district. Today, that park is a picture of neglect. In the middle of the park is a remarkably ugly cement tree with rusted iron vessels stuck to its branches, symbolising tamarind. The Mexican grass growing in the park is unkempt and the circular path has caved in at several places. The park looks like a surrealist sculptor's idea of a bad joke.