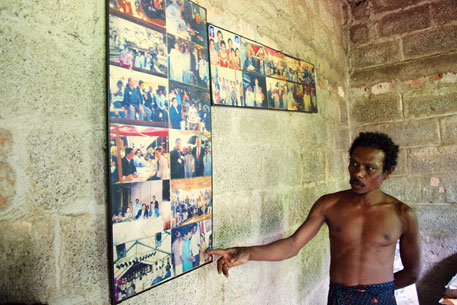 Kuttimathan Kani’s tiny, unfinished house has a few laminated photos hung on one of its walls. In those pictures, he is standing next to a dignitary. The photos were taken in Johannesburg during the 2002 Earth Summit, says the Kani tribesman. “There, I was asked to welcome the prime minister of Canada,” adds Kuttimathan.

A mere “I’m from India” is insufficient to describe Kuttimathan’s realities. He lives in a village, Chonampara, in the reserved forests of Agasthya Hills, a part of the southern Western Ghats in Kerala’s Thiruvananthapuram district. Kuttimathan, 49, belongs to one of the poorest tribal communities.

The tribe has a population of 25,000 and lives in scattered settlements.

The forests of Agasthya Hills are a treasure trove of medicinal plants and the Kanis have a rich traditional knowledge of these resources. They make a living by growing millets, arecanut and rubber, and collect honey and python fat, a remedy for rheumatic pain. Kuttimathan was taken to the summit by P Pushpangadan, former director of Tropical Botanical Garden and Research Institute (TBGRI) in Thiruvananthapuram. It is an autonomous institute set up by the Kerala government to develop herbal drugs. Pushapangadan was to receive the UN Equator Initiative Award. The award was for a “unique, innovative, successful and sustainable model” of access-benefit-sharing he and his TBGRI team developed with the help of the Kanis. Kuttimathan was the secretary of an all-Kani trust that was formed as part of the benefit-sharing.

What led to this benefit-sharing was a drug that could fight fatigue and stress, enhance immunity and protect the liver. TBGRI had developed Jeevani in 1995 after eight years of research. TBGRI shared half of the returns from selling Jeevani with the Kani trust. This was indeed a positive step, considering there was no legislation at that time on access to local resources and benefit-sharing. Despite being highlighted as successful and sustainable, the TBGRI-Kani model could benefit only a few community members.

Jeevani comes into being

The association between the Kanis and the TBGRI team started in 1987, six years before the Convention on Biological Diversity—which advocates fair and equitable sharing of benefits—came into force. A team led by Pushpangadan and S Rajasekharan, both from Regional Research Laboratory (RRL) in Jammu, visited Agasthya Hills to collect data on plants and tribal people. RRL is one of the laboratories under the Council of Scientific and Industrial Research. Kuttimathan, Mallan Kani and Eachan Kani, all from Chonampara, were the team’s guides.

During the survey, Mallan and Kuttimathan told the two scientists that they used to eat fruits of a small plant to remain energetic while wandering in the forests on an empty stomach. The plant was arogyapacha (Trichopus zeylanicus travancoricus), a perennial herb, described as wonder herb due to its rejuvenating qualities. Though the main species, Trichopus zeylanicus, is found in Sri Lanka and Thailand, only the Indian variety is proved to have medicinal qualities. In the subcontinent it grows in the wet forests of southern Western Ghats, falling in Thiruvananthapuram and Tamil Nadu’s Tirunelveli district. 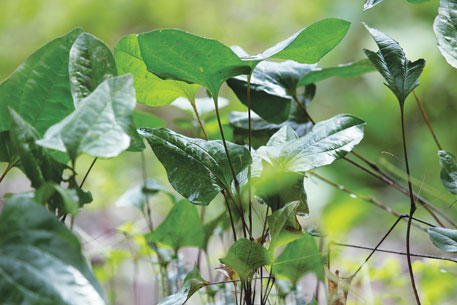 Once back at RRL, the team found out that all parts of arogyapacha had therapeutical qualities. “Since its fruit is rare, we validated all the parts of the plant,” recalls Pushpangadan. They found the leaves had the necessary pharmaceutical qualities. “The Kanis had neither used the fruit nor the leaves in their traditional medicines,” says Rajasekharan.

The research was shifted from RRL to TBGRI when Pushpangadan took charge as its director in 1990. In 1995, Jeevani was ready. It contained 13 to 15 per cent arogyapacha leaves, besides three other herbs. For manufacturing and marketing, TBGRI called tenders and shortlisted Arya Vaidya Pharmacy of Coimbatore.

The following year, TBGRI transferred the technology to develop Jeevani to the pharmacy against a licence fee of Rs 10 lakh and royalties of two per cent at ex-factory sale. TBGRI decided to share half of these returns with the Kanis. Since the community did not have a formal set-up to receive its share, the Kerala Kani Samudaya Kshema Trust was formed in 1997. Mallan was made its president and Kuttimathan the secretary. In 1999, TBGRI transferred Rs 5 lakh to the trust as fixed deposit. “The Rs 5 lakh deposited in the trust fund was the money we scientists decided to forego,” says Rajasekharan. Apart from this, the trust received Rs 1.5 lakh annually as royalty till 2008, Rs 1.5 lakh from Pushpangadan’s award ($30,000) and interests on the fixed deposit. Mallan and Kuttimathan got Rs 20,000 each from the trust fund for providing key information. Eachan Kani got Rs 10,000.

TBGRI had appointed Mallan and Kuttimathan consultants in 1993 for Rs 3,000 a month. But both were shown the door when Pushpangadan left TBGRI in 1999. “They told us they do not have money to pay us,” says Mallan. With the interest from the bank, the trust built a community hall and bought a jeep on loan but failed to repay. The bank recovered the debt from the deposit. Later, the vehicle was sold.

When track was lost

When the pharmacy started production in 1996, disputes over raw material and ownership of the resources emerged. As part of the benefit-sharing it was envisaged that the Kanis would collect and sell arogyapacha leaves to the pharmacy. But TBGRI had not taken the forest department into confidence. As per laws, the Kanis could collect only minor forest produce and arogyapacha was not one.

Unaware, the tribe continued collecting raw material. Traders too moved in, smuggling large quantities of the plant. The forest department raised concerns and included the plant in the list of endangered species. Criminal cases were slapped on the tribal people who tried to sell arogyapacha. “There was a good demand for Jeevani but it could not be met due to lack of raw material,” says A R R Raja former president (finance) of Arya Vaidya Pharmacy. A 75 gm jar of Jeevani was priced at Rs 160. The pharmacy produced 80,965 Jeevani bottles worth Rs 1.29 crore between 1996 and 2009. “It was paying Rs 20 for a kilogramme of arogyapacha leaves. Later, it was ready to offer Rs 100,” says Raja. Some families started cultivating the plant around their settlement, but could not sell the harvest since it was seized at the forest check-posts. “We were forced to buy leaves from traders in Tamil Nadu,” he adds.

Throughout the marketing and production of Jeevani, TBGRI was taking the decisions. Consultations were confined to with those from Chonampara. Many people, especially those in the interior settlements, were not even aware of the deal. This led to a divide within the community which was further deepened by the Kerala Institute for Research, Training and Development of Scheduled Castes and Scheduled Tribes, which documents traditional knowledge. The agency criticised TBGRI for selling traditional knowledge to a private agency. The contract between TBGRI and the pharmacy ended in 2003, but it was extended for three years. In 2004, TBGRI formed a business management committee with three experts from outside, two from the Kani trust and two from TBGRI itself. The committee decided to double the licence fee and and royalty for the second agreement (starting 2007). The pharmacy said it would sign the agreement only after ensuring steady flow of raw material. After a trial run of two years, the pharmacy withdrew from the deal in 2008. “The project could have been a success and earned the tribals a permanent source of income if we were assured sustainable supply of leaves,” says P R Krishnakumar, managing director of the pharmacy. Political will was also absent, he adds. The process patent of Jeevani ended in 2008.

There were five Indian patents for different research processes based on arogyapacha. Besides Jeevani, TBGRI received patents on an anti-diabetic herbal drug; a herbal sports medicine; and an anti-cancer drug. “We wanted to take international patents for the drugs but the TBGRI governing council rejected the proposal saying there was paucity of funds,” says Pushpangadan. None of the patents refers to the tribe’s name anywhere. “At that time there was confusion whether an informant could be included in the list of inventors for a patent for a scientific process,” says Rajasekharan. TBGRI never applied for a trademark for Jeevani. “The name Jeevani is already in the ayurveda literature,” says Rajasekharan, now head of the ethnomedicine and ethnopharmacology division of TBGRI. In 2000, NutriScience Innovations, a US-based supplier of nutritional and functional food ingredients, run by a group of Keralites, raised a storm by acquiring a trademark on Jeevani. After many controversies it was renamed “Jeevani Jolt 1000”.

“When the product patent system came into existence in 2005, I wrote to the then TBGRI head, reminding him of converting the process patent of Jeevani into product patent, but no action was taken,” says Pushpangadan, now vice-president of Amity Institute for Herbal and Biotech Products Development, a private company in Thiruvananthapuram.

Both Pushpangadan and Rajasekharan say the present patent regime is inadequate to protect the traditional knowledge of indigenous communities. Whether it is process or product patent, it has a life of 20 years. “For exclusive knowledge of the communities, patents should be in their names. A new mechanism should be evolved in which the communities can enjoy life-long benefits,” says Pushpangadan. The Kani trust is not active anymore.

P K Anoop, a research scholar who is a Kani and is doing doctoral studies on arogyapacha in Kerala University, says the TBGRI-Kani sharing cannot be called a model. “It is just a learning experience. Nobody asked what the tribe really wanted.”