Scientists are only now finding out the Kanis' knowledge of herbal remedies. The most outstanding find so far is arogyapacha 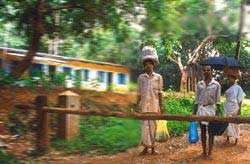 In November 1995, TBGRI sold the formula to Arya Vaidya Pharmacy (AVP) of Coimbatore for a licence fee of Rs 10 lakh to produce the drug for seven years. The licence fee and the 2 per cent royalty on the profits from the formulation was to be shared equally by TBGRI and the Kani tribe.

Sharing of benefits with Kanis was a promise that TBGRI had made much before it became the catch phrase in biodiversity conservation. "Right in 1987, the scientists had promised the Kani tribals due share from any profit arising from research based on the plants we showed them," says Kuttimathan Kani, who was one of the guides who introduced Pushpangadan to the herb. "After a few years of silence, suddenly the two scientists came to visit us two years ago," he notes. They offered a share to the tribals. "It is the first experiment of benefit-sharing with a local community in India, and perhaps the world," says Pushpangadan. He wants it to be a model.

The herb clicked in the market. There was instant demand for the arogyapacha-based formulation called Jeevani, which was sold at the rate of Rs 160 for a 75-gram jar. There are orders worth a fortune pending from Southeast Asian countries such as Thailand, says an AVP spokesperson. TBGRI is now in the process of developing another drug from the same plant: a non-steroid sports medicine. "We do not have long distance runners in Kerala. We lack endurance," says Pushpangadan. He notes that another arogyapacha formulation is being tested in sports schools of the state as an endurance-enhancing drug.

Now, there is a huge demand for the raw material. For full potency, the wonder herb has be to cultivated in its natural habitat, that is shady and wet tropical forests. Kuttimathan says that the pharmacy has offered the tribals a neat Rs 100 per kilogram of arogyapacha leaves. The tribals have started growing it in their backyard of their forest settlements under a government scheme. Says Madhavan Kani in Chonanpara: "We would pick up saplings from the forest and they grow well here."

If only it was this simple, we would have brought you a success story. But the state forest department had different ideas.

The forest department reserves the right to conserve arogyapacha, and prevents Kanis from selling it outside

When Kanis took arogyapacha leaves out of their settlements for sale, they were stopped at the forest check-post. At the state forest head office, Premachandran, chief conservator of forest (CCF), explains the technicality: "Arogyapacha is not included in the list of minor forest produce." Only minor forest produce is allowed out of the forest. Forest officials confiscate any consignment of arogyapacha going out of the forest. M S Joy, warden of ABP, and a forest guard on duty assure that they would not allow any of the wonder herb to go out.

Arogyapacha is a "rare plant" and is contraband in the free market, points out T M Manoharan, CCF (vigilance). On TBGRI'S part, Rajasekharan argues that though initial studies suggested that arogyapacha was rare, subsequent studies showed that it was also found at other places in the region, including Tamil Nadu. He says cultivating and collecting the plant in the forest will not wipe it out. This raises a question: what is the forest department trying to protect except for its control over the poor tribe's limited means of generating an income? Pushpangadan maintains that TBGRI has written to the forest department to allow Kanis the right to cultivate and sell the herb.