How the US multinational won state governments and influenced policy

When representatives of the world’s largest seed company, Monsanto, began to make discreet visits to the second floor offices of the inconspicuous Van Bandhu Kalyaan Yojana in the Gandhinagar headquarters of the Gujarat government in 2007, it set in motion a process that would transform Indian agriculture in unexpected and significant ways. Maize farming in the most backward recesses of the country would change forever, with tribal populations giving up their traditional seeds for the world’s best-known Dekalb brand of hybrid maize (corn) and age-old methods of pesticide-free cultivation giving way to the industrial model of farming.

The key to Monsanto’s ability to win governments and influence policy is simple. It looks at key entry points in a given situation and offers a solution that promises something larger than just seeds: it talks of “commitments on sustainable agriculture to produce more, conserve resources and improve farmers’ lives”, as an official spokesperson puts it. Take the Gujarat example. Van Bandhu Kalyaan Yojana is the Tribal Development Department (TDD) of the state and it was with this unlikely department that Monsanto, the American giant with profits of US $1 billion last year, inaugurated a private partnership (PPP) that is now being replicated across the country. Monsanto gave away free its Prabal and Hishell seeds to farmers in two districts—and thus captured a larger share of the Indian market than its rivals. It was a brilliant move when Monsanto told TDD that it shared the department’s vision of improving the lives of tribal people; the 10-point agenda included doubling of farmers’ incomes in five years, and the seed giant promised it would foster these objectives through Dekalb hybrids.

It was not seeds alone that Monsanto gave away. It also provided fertiliser (in a tie-up with Gujarat State Fertiliser Corporation), threshers and other inputs along with market linkages by getting the poultry feed and starch manufacturers to explore the possibility of sourcing from these areas. This, in fact, is a hallmark of the way Monsanto operates, arranging partnership—with private agriculture service companies, industry and NGOs—and offering a complete package to farmers.

The genesis of its maize partnerships with government is instructive. It started in 2007 as a pilot study named Project Rainbow—a similarly named exercise has just been completed in Jammu and Kashmir—that saw Monsanto give away free seeds to farmers in 300 villages of 13 talukas in Dahod and Panchmahal districts of Gujarat. Monsanto had the full backing of TDD and the department of agriculture, which speedily approved its hybrids as appropriate for this area of poor rainfall, and the district administrations. Result: it showed that farmers had doubled their income to Rs 6,500 from using their hybrids, whereas they got just Rs 3,300 per acre (0.4 ha) from the open pollinated varieties (OPVs). Indian farmers use OPVs for the most part and the seed replacement is extremely low.

Once Rainbow had shown the potential and promise of hybrids, Monsanto upgraded it to a full-scale PPP called Project Sunshine, which has spread substantially, covering five districts and over 200,000 farmers.

Not surprisingly, it has once again won a tender in Gujarat, this time for three years from 2011 to 2014. The Monsanto consortium includes Anil Nutrients, a leading starch manufacturer, Indian Society of Agribusiness Professionals, which provides extension services and a non-profit.

Gujarat has a substantial tribal population, its tribal belt running across the eastern part that is linked to the tribal regions of Madhya Pradesh and Rajasthan. In 2010, soon after it had gained two full years of experience with its Gujarat PPPs—these covered Dahod, Panchmahal, Sabarkantha, Banaskantha and Vadodara districts—and diffused the results widely, Monsanto sold variations of the scheme to Rajasthan, Odisha, Madhya Pradesh and Jammu and Kashmir. It is also said to be in talks with a clutch of other governments.

The interesting aspect of these PPPs is that states bear no costs. Funds are drawn from the Centre’s Rashtriya Krishi Vikas Yojana (RKVY), which allows states plenty of flexibility in how the monies are spent. Odisha, for one, has used RKVY funds provided under the Second Green Revolution programme in eastern states to promote a huge shift to hybrid maize. A spokesperson told Down To Earth (DTE) that Monsanto’s package includes programmes on agronomy, pest management, and post-harvest care, all of which raised yields to 1.5 tonnes per acre against 0.5 tonnes with conventional seeds. “Through our various PPPs with various states, we are reaching out to one million small and marginal farmers and helping them increase maize productivity.” This, of course, is in addition to the number of farmers who buy Dekalb seeds in the usual way.

The usual way can involve some pretty interesting methods. In Himachal Pradesh, a senior agriculture official revealed that Monsanto officials had taken a tractor trolley in Dolla village in Solan district’s Nalagarh block to sell their hybrid maize seeds without informing the agriculture department. Says an outraged D R Thakur, an official with the state agriculture department, working in Nalagarh block: “According to the Essential Commodities Act, seeds are to be sold through licensed shops. But today you can see hybrid seeds being sold everywhere—in a local general store in a village or a chemist shop, all without a licence.” 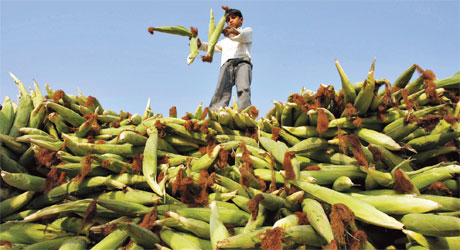 Thakur says the Nalagarh office had complained to the higher-ups in the agriculture department about the Monsanto incident. But inquiries revealed that this has become a common practice in Himachal Pradesh in the past year with seed companies offering home deliveries. In Bihar, it is learned that some multinationals are actually paying farmers to use their seed. “If the farmer gets a good yield then he will start buying from the company,” explains an extension worker.

The PPPs appear unstoppable as farmers report increasing yields. But food sovereignty activists and others campaigning for sustainable agriculture warn of the pitfalls that lie ahead. Kavitha Kuruganti, convenor of Alliance for Sustainable & Holistic Agriculture (ASHA), says a fundamental problem is that maize continues to be classified as a food crop in official statistics even though it is an industrial crop (only 25 per cent goes for human consumption). ASHA is an informal national network of more than 400 organisations, which has undertaken fact-finding visits to the tribal belts of Gujarat, Odisha and Rajasthan.

The visits revealed at least three factors come in the way of hybrid maize enhancing food security of poor tribal farmers. One, they do not like consuming hybrid maize and are gradually moving away from maize consumption—this has been borne out by surveys conducted by the National Institution of Nutrition at Hyderabad and field visits by DTE—once hybrids enter the picture. Farming households report that the taste is not good and that they cannot digest it easily (even their animals do not like hybrid maize fodder, they report). The bigger worry is that hybrid maize is grown as a mono-crop which eliminates many other nutritious crops, such as vegetables, that were part of the earlier pattern of farming when people were growing their own maize varieties.

“If one must absolutely promote maize, due to reasons like water crisis in rice-wheat pockets, there is no reason why OPVs cannot be encouraged. The Directorate of Maize Research has released more than hundred OPVs. If the same kind of investment is used here as in the PPPs, productivity is bound to increase,” says Kuruganti.

This is the point that Thakur also makes. The seed companies, says the official, have cashed in on the deficiencies of the agriculture departments in almost every state. “It is not very difficult to get yields of 1.2 tonnes per acre (0.4 ha) even with OPVs. All that’s needed is an understanding of how to pick the best seeds and the same set of good management practices,” agrees Thakur, warning that “hybrids may give better yields initially but soon enough their yields will stagnate as everyone knows.”

The irony is that for all the crores of rupees that are being pumped into hybrids, desi or traditional white maize is fetching a higher price in several parts of the country. In Nalagarh, farmers declare they will not easily switch to hybrids despite the blandishments of seed companies. For one, the new seeds are expensive, and for another, they need inputs which are even more costly.

Budh Ram, a farmer in his seventies, who is struggling with the contradictions and confusion brought in by the new technology, points out, “The hybrid maize seed is far costlier than the seeds we use. Yet, traders pay much higher prices for our traditional varieties. We have just sold our makka (corn) at Rs 1,200 per quintal (100 kg) but hybrid maize fetched only Rs 1,000.”

All that Ram is certain of in these perplexing times is that maize is the right crop for him to grow rather than rice—“the water table is declining sharply and makka requires very little labour.” Besides, marketing is no problem since traders come to his doorstep and save him as much as Rs 1,800 on trips to the market yard. The hybrids obviously have not won the war yet.