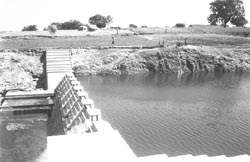 Some really serious issues face Gujarat and Madhya Pradesh today, and the present drought has highlighted them. "Water-related disputes are gradually increasing in rural areas. They are expected to surpass land disputes in the next 10 years," Rajora fears. And it is quite clear that the government cannot supply water to every village in rural India when it fails to supply water in cities, where political pressure to provide civic amenities is much greater than in villages. If the government fails, people have to take the matter in their own hands. Rainwater harvesting is the only solution.

The Gujarat government is not realising the magnitude of the present problem, complains Antala. "The state government is still focussing mainly on extraction of groundwater in Saurashtra and Kachchh regions," he says. He points out a recent plan of the state government to dig 120 borewells with an investment of Rs 70 crore in Wankaner taluka of Rajkot for supplying drinking water to Rajkot city (see box: Short-term plans, long-term disasters). In Saurashtra, it has become a business for big farmers to own deep borewells and sell water to small and marginal farmers. The government has no data to show the actual number of wells and borewells in the region. "After observing the state government's reluctance, people have started managing their water on their own," he adds. "Many government officials are complacent about water harvesting projects because they think they will be able to bring water from the Narmada to Saurashtra and Kachchh regions. It is merely a plan, nothing else," says Antala. He points out that even if the Madhya Pradesh government allows to increase the height of the Narmada dam and the water comes to Saurashtra and Kachchh, it will never benefit the people. This, he reasons, is because the government has already issued licences to 10 sugarcane mills, which will lead to cultivation of sugarcane, which is water-intensive and will eat into the water supplies.

But there are a few positive signs in Gujarat. The government has sanctioned 1,577 micro-watershed management projects in the state by July 1999. "The reasons for the failure of water harvesting structures in some regions are poor site selection and works done by contractors who try to save money. Most government water harvesting structures have failed because of these reasons," says P P Bhatt, the Ahmedabad-based project officer of Bochasanwasi Shri Aksharpurshottam Public Charitable Trust, which is involved wm activities. The state government has failed to implement its plans properly because it has not promoted the concept of participatory development in wm programmes, Bhatt says.

Even in Madhya Pradesh, not all wm projects have been successful. There are 1,200 stop dams in Jhabua and 600 in Dhar. A senior state government official, asking not to be named, pointed out that almost one-third of water-harvesting projects in Jhabua and Dhar are useless. This, he explained, was because of improper site selection. The main reason, he cites, is the implementation of these projects on political criteria and not on technical criteria. "During this year's drought, water harvesting structures have failed to yield beneficial results only in those regions where the projects have not been implemented on technical criteria but on some political criteria," he says.

The Madhya Pradesh government is considering a legislation which would let the communities regulate and utilise groundwater resources. A welcome step by all means as a state government is now actually accepting the limitations of the administration in managing groundwater and planning to use the inherent potential of communities in India to take care of groundwater.

The way in which some villages of Gujarat and Madhya Pradesh have made light of the current drought makes it clear beyond any reasonable doubt that the answer to most problems in rural areas lies in rainwater harvesting. "The water resources of Kachchh are dependent entirely on rain. The water harvesting project implemented during the past 10 years in this area shows that it is possible to arrest the further deterioration of the groundwater regime of the area," says K C B Raju. According to Antala, "Water harvesting can easily be done by people themselves. There is no need for any government help. For this, we need to create public awareness. The message will not spread by mere lectures. Even if we harvest one-fifth of the total rain falling in Saurashtra and Kachchh, there won't be any water scarcity. "

In an interview with Down To Earth , the Union minister for water resources, C P Thakur, said in the present scenario, "the role of the water resources ministry is just that of a public relations officer who liaisons between state governments. "Rainwater harvesting will be a priority of my government. The water harvesting concept has shown good results in areas where it is implemented properly," he said.


According to Antala's calculations, even if an average of 550 mm of rainfall is harnessed in the Saurashtra region, there would be no shortage of water for drinking and irrigation. "If we are serious about the issue then it is important to raise the groundwater level in Saurashtra. For this, artificial recharging is important. And recharging wells and borewells is the most effective way of doing this. There are about 700,000 wells in the region. If we recharge all the wells then we will be able to irrigate about 720,000-800,000 ha of area every year, he says.

"The need for harvesting rainwater in Gujarat is greater as it is surrounded by sea on three sides and 65 per cent of Saurashtra's land is below the sea level, in some places as much as 46 metres below sea level. So, when the groundwater level goes down the seawater will enter the aquifer," Antala says.

The collected water could be stored underground by directly injecting it into open dug wells to replenish the depleted groundwater aquifers, explains Ashvin Shah. He calculates: "The population of Saurashtra is 12.3 million. The average annual rainfall is around 530 mm falling over 64,000 sq km area or a quantity of 34,000 million cubic metres (mcum) per year.... Assuming 20 per cent of the rainwater is collected, the total quantity of rainwater collected annually would be 6,820 mcum per year or about 1,500 litres of water every day per person. Considering the fact that many people do not get even 125 litres per day, the quantity the United Nations considers minimum for domestic use, the rainwater harvesting potential is indeed very high or 12 times the drinking water need. Groundwater restoration should be a priority and we should find out ways to quickly recharge the groundwater," Shah points out. He estimates that as much as 6,096 mcum of water can be put into the ground if recharging work is taken up all over Saurashtra.

The figures speak for themselves. And India has a great tradition of harvesting rainwater. Several villages are still showing the grit that has seen human civilisation through over centuries. The present challenge is about combining the common sense of the past with the best of modern science. If India fails to do this, there will be countless women like Lasan Bhilwad, digging dry riverbeds for a pot of water. There will be an increasing number of riots over water. The choice is between rainwater harvesting and a parched, violent future.