The past catches up with the present

A custom of community forest protection, started in 1832 by the Raja of Alwar, is making a comeback

The past catches up with the present 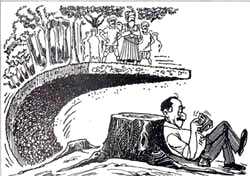 IN THE desert state of Rajasthan, forests have always been managed by communities. Over the years, with "modernisation" and flawed official forest management systems, the practice faded. However, traditional forest management is making a comeback in Alwar district and the success of the revival is spreading. And, all this is being done independent of government agencies.

In 1832, the Raja of Alwar, Jai Singh, set up "reserve forests" in his principality with the help of the people. Though the provocation for this was British plans to take over common lands, the reserve forests were essentially meant to ensure food and fodder availability in times of need.

Jai Singh recognised that the sustainable use of resources could be optimised only if the people regulated them. The protected forests, which were known as roondhs, not only helped protect biodiversity, but also proved to be resources to fall back upon during droughts and other calamities.


Normally, only the Raja's cows were allowed to graze on the roondhs and only his guests could hunt in them. However, the maintenance and protection of the roondh were the responsibility of the villagers, who treated the forests as their own. "It was the people who decided when to use the roondh rather than the king," says Rajinder Singh of the Tarun Bharat Sangh, a non-governmental organisation in the area that is working for the revival of the roondhs.

To prevent over-exploitation of the reserves, each person was allotted a share of fodder and wood that could be taken during emergencies. The portions were fixed according to the needs of individuals. "Any violation of the strictures was punishable by the panchayat -- by fines or even expulsion from the community for specially recalcitrant individuals," says Jagdish of Nandu village. Not reporting a violation was also punishable by fines.

The underlying logic of roondhs was that they would be conserved best by those who benefitted from them. An indicator of the success of this approach is the absence of any demarcations that separated the protected forests from the rest. Such divisions were unnecessary because the people were fully aware of which parts constituted the roondhs.

Besides roondhs, there were two types of reserve forests. The deobani were considered sacred and usually had a presiding deity. It was believed that the abundance in these forests arose from the sanctity of the trees in them. Another form of conserved forests were groves consisting of a single type of tree that various gotras (clans within a caste) considered consecrated. The villages of Rada and Nandu, for instance, revere the peepul tree.

Government interference in the control of forest resources began in 1929 and resulted in several conflicts between the people and the authorities. The forest department sought to conserve forests by restricting their use, but the people demanded that their right to use forest resources be restored. Says Singh, "The blame for not conserving the forests lies squarely with the forest department."

In 1984, the government categorised the forests of Sariska in the area as reserved forests. But its intention to protect the trees within the sanctuary failed because the community's hold over the forests weakened and this led to over-exploitation. According to Singh, the forest department cannot care for the forests as much as the villagers can.

Satish of Nandu village believes that the forest department's interference led to the decline of the traditional system of forest management. "The root cause lies in the erosion of the people's traditional rights," he feels. Earlier, the villagers had a sentimental and religious attachment to the forests that surrounded their homes. But, says Jagdish of the same village, once the contractor's workers got away scot-free after cutting trees, the belief in the holiness of the forest eroded.

"Why should anyone take special care of these forests, now that it does not belong to them?" asks Umrao of Rada village. He agrees that the system of socially protected forests is a sensible one, but asks where the land is to come from, as now the land has been taken over by the forest department.

"This alienation has dealt the most severe blow to the very existence of forests in the area," according to Singh.


Singh says that the forest department is insensitive to the sentiments of those who use the forests. They are treated as violators of the law.

Indeed, the attitude of the forest department is that those living inside the reserve forest are actually responsible for the degradation.

The forest range officer at Tehla, at the edge of the Sariska sanctuary, says the government wants to drive away those residing in the sanctuary because they "disturb the animals inside" by grazing their cattle and cutting wood.

He feels the best way to save the forests is to evict those inside the forests, rather than leave them to the people and their traditional methods. The officer believes that roondhs are just densely wooded areas and official documents seem to reflect this notion.

However, 150 years after Jai Singh set up the reserve forests, the villagers of Alwar district and TBS are recreating them in an attempt to revive their traditional forest management methods (See box). The success of these attempts has encouraged others and more villages are now asking for traditional forest rights to be restored.

The extensive growth of trees in the deobani near Rada and Nandu villages speaks for the success of the people's management of forests. Says Prabhudayal of Rada, "Earlier, although the forest department claimed it was protecting the trees, one could cut wood by bribing the guards. Now, no one cuts the trees because everyone considers the trees their own." Even the children in these villages are aware of the need to protect the forests.

In fact, the people of Satawat village have gone a step further and maintain the enclosure of their land in the Sariska sanctuary is illegal. They contend Jai Singh had converted their land into reserve forests on the condition that it would be returned when they ceased to exist as roondhs. But when the government converted the woods into sanctuaries, this part of the promise was by-passed.

Whether the contention of the Satawat village will stand in court remains to be seen, but the assertion is an indicator of the increasing consciousness of the people. The decision makers have to relegate power to the local people. As Singh puts it, "It is the dissatisfaction of the people with the current system of management, more than anything else, that is killing the forests."