The forest department reserves the right to conserve arogyapacha, and prevents Kanis from selling it outside 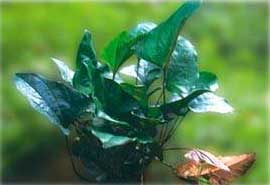 In 1995, the government's Integrated Tribal Development Project in Nedumangad initiated a scheme in collaboration with TBGRI to help the Kanis grow medicinal plants in their settlements. Under the project, 50 select families received Rs 1,000 each. Reportedly, 20.25 hectares were under cultivation. "Many people successfully cultivated arogyapacha" notes Rajasekharan. TBGRI bought the leaves from the Kanis, paying Rs 30 per kg for chemical trial and for pilot production.

During the second harvest, some people uprooted the whole plant from their gardens and some others took the wild herb from the forest, according to TBGRI officials. This alerted the forest department against possible large-scale 'smuggling' of the herb. When Kanis tried to sell the herb, they were caught. In a widely reported operation in 1996, Manoharan confiscated 10,500 arogyapacha plants from a private nursery at Vithura village in Thiruvananthapuram. "We are trying to prevent destructive use of the plant," Manoharan explains.

The CCF's next argument is that it is mostly non-tribals or tribals acting on behalf of non-tribals who smuggle the plant. The forest department is not convinced that Kanis will benefit from the sale of arogyapacha. They believe that the sale will benefit private interests and not the tribal community. "It is a way of exploiting the tribals by certain lobbies. They would ask Kanis to collect the plant and give them a little money or alcohol in return," says Kerala's forest minister P R Kurup. Such concern for the tribal people on the part of the forest department is laudable. However, imposing a blanket ban on taking arogyapacha out of the forest does not help anybody. Least of all the Kanis.

Manoharan says Kanis got little in return for whatever material they supplied. "If any pharmacy has collected arogyapacha, they have done it illegally," says Manoharan. G Gangadharan, general manager (product development) of Arya Vaidya Pharmacy, counters the allegation: "Our initial lot of 22,000 to 25,000 bottles were made from raw material made available by TBGRI, as per an agreement. There has been no production for the last one year."

It is improper for a government department to make changes in the law to aid a private company, notes Manoharan. "TBGRI could have sold the technology to Oushadhi, the state government's own drug company," he notes. Rajasekharan says that the Council of Scientific and Industrial Research (CSIR) allows technology transfer to anyone who offers the biggest return. "There is a demand for the plant. If the Kanis cannot sell it, somebody else will. They will be the losers," he sums up.

Manoharan suggests artificial regeneration technique for the plant. TBGRI and a cooperative can help the Kanis cultivate the plant, he recommends, adding that they should seek permission for it in "due process". "What is the big hurry?" he asks. Yet he insists that the department's only interest is in ensuring that the Kanis are benefited.

Kanis are puzzled. "We are asked to grow medicinal plants but we cannot sell them," says Kuttimathan. He picked holes in the forest law-while addressing the media at the first press conference staged by a Kani group at the press club of Thiruvananthapuram on June 11, 1998. In quite an articulate manner, he argued that the government should reward Kanis for conserving rare plants and developing special knowledge about them. He threatened to bring Kani families to the state secretariat for a sit-in strike. His immediate demand: allow Kanis to grow, sell and make profit from arogyapacha.

"The sale of the leaves would have given us a steady income," says Kuttimathan. The money meant for tribal development never reaches the Kanis, he points out.

The representatives of the tribe have launched the Kani Community Welfare Trust in November 1997, and started a bank account. Kuttimathan, secretary of the trust, notes that it has representation of 40 tribal settlements. But TBGRI, an autonomous institution under the state government, is yet to get permission to transfer the money to the account. The Kanis1 share of the money from the TBGRI deal is yet to be given.


Kani vs Kani
Kanis are dragged into bureaucratic wrangling, pitting them against each other

The most bitter conflict of them all is between groups of Kanis themselves, Kanis have had to take sides in a battle fought on their part by two competing government agencies: TBGRI and the Kerala Institute for Research, Training and Development of Scheduled Castes and Scheduled Tribes (KIRTADS). Supported by KIRTADS, many Kani eiders believe that their traditional knowledge is sacred and should remain exclusive.

"It [traditional knowledge) should not be sold. But what to do? We are hungry," says Mallan Kani, a healer and practitioner of the tribal chant in Mangode settlement. Eswaran Kani, who has been formally trained by KIRTADS, puts it simply: "The Kanis have sold their secret because of their poverty; Rs 5 lakh (the Kanis' share of the licence money) is a pittance, considering the huge profits that can be made from it." He hints that the very name "arogyapacha" is an outcome of TBGRI's intervention. Kuttimathan has a different view. He says the younger generation of Kanis rechristened the wonder herb.

Tribal healers such as Eswaran are sticklers of a code of conduct that emphasises the purity of the practitioner. In September 1995, a group of nine Kani healers wrote a letter to the chief minister opposing the sale of their knowledge to a private firm. Eswaran visited Chonanpara to dissuade the Kanis from entering into the deal with TBGRI and selling arogyapacha. "He went back a bit annoyed with us," says Kuttimathan. "If a healer has the knowledge, then as an individual he can gain. What is the use to the community?" he asks.

Some of the tribal healers are highly successful. Achappan Vaidyar is not a Kani. But the healer from Wayanad in northern Kerala has made a fortune. KIRTADS has initiated a three-year training programme for tribal healers under Achappan's guidance, He is a celebrity in Wayanad, where tribal people live in penury.