The return of Mowgli's mother

Rudyard Kipling gave us unbelievable stories about the humane wolf. Now, a court decision reaffirms the animal's vital role in the ecosystem

The return of Mowgli's mother 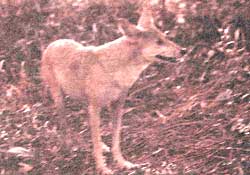 A court ruling in the US in January 1995 cleared the way for an ambitious plan to reintroduce the gray wolf (Canis lupus) to parts of its former range. One of the 2 sites selected is the famous Yellowstone National Park, which was established in 1872 and is well known as the world's 1st national park. What is not so widely known is that for a long time after its creation, the park's rangers used baits, poisons and snares, in addition to the ubiquitous gun, to exterminate predators. The last wild wolf in Yellowstone was killed in 1935.

Sixty years later, the wheel has turned full cycle: a pack of wolves will soon be turned loose. But human attitudes die hard, and the ranchers on the park's border are still unreconciled to the return of the one creature they love to hate. The powerful American Farm Bureau Federation which went to court to try stop the scheme is a ranch-dominated organisation.

For the early White settler in America, the wolf represented the symbol of the wilderness that had to be vanquished. What began as an utilitarian attempt to protect stock was, however, to acquire in the early years of this century the shape of a full-blown government anti-lupine pogrom programme. From 1909 onwards, the us Congress began the federal funding of schemes to wipe out carnivores.

In 1931, the Congress enacted a law that required federal officials to discover "the best means of eradication, suppression, or bringing under control mountain lions, wolves, coyotes and other animals". This hatred of predators was a part of a wider ethic of invasive resource management: the number of game animals (read deer) was the criterion for good management but the carnivores stood in the way. What was called for was not the destruction of individual wolves or mountain lions but the elimination of entire species. All out efforts to exterminate predators were a logical corollary to building up herds of deer. So successful were these programmes that by the '30s the wolf and the cougar no longer needed to be suppressed.
The rationale behind such concerted efforts go beyond their mere utilitarian origins. It was part of a wider strategy of "improvement" (read cleansing) that required the elimination of those animals that were deemed disobedient or dangerous. Nor was the us the 1st in the vanguard of such projects. The extermination of "vermin" was a part of statecraft in many European countries. From here to human eugenics was a very small step.

In Ireland, professional wolf hunters were engaged throughout the 17th century: much like human rebels, carnivores were seen as impediments to the conquest and enslaving of nature and the opening up of lands for agriculture. In Scotland, writes the historian T C Smout, the great clan wars found the Campbells offering "the same reward for the head of Macgregor as for the head of a wolf." On the European mainland, similar efforts were less successful only because the animals often had large contiguous habitats and could recolonise areas where they had been exterminated.

Needless to say, large carnivores would anyway have found it difficult to coexist with people living in larger settlements or practicing more intensive forms of agriculture. Even today, the only wild wolves in western Europe survive in the Appenines in Italy and parts of Scandinavia, both relatively sparsely populated by humans. But the sharp edge against carnivores was provided by lords and kings who gave out rewards and bounties for the animals. The war against vermin gathered force with the spread of capitalism, although many of these decimation programmes had older roots. They were to be extensively promoted in the colonial territories of the English and the French in Africa and Asia.

But the record of the colonial powers must not escape scrutiny. Indian conservationist Arjan Singh was not far off the mark when he recently commented, "Those developed countries which are so keen on preserving the great predators have none of their own. The predators are unwelcome in their countries of origin. Wolves have been extirpated in Europe; and the lynx introduced into Switzerland faces an uncertain future."

So the American ranchers in Wyoming are in good company. It is just that the fulfillment of the American dream of conquering the inner frontier saw the drama of extermination played out in a matter of decades rather than centuries.

There were, of course, different kinds of priorities at work at various points in time. In the colonies, the destruction of carnivores was often likened to hunting down rebels. In western United States, the programme sought to replace indigenous wildlife with the artificial ecosystem of capitalist ranching. Ranchers kept freeranging stock that would not (in the time-tested traditional manner) be penned in for the night to guard against attacks. Traditional herders in India or Pakistan did kill wolves, and when possible, their cubs. But they lacked the modern poisons of the American rancher.

Colonial India provided a different justification, one not dissimilar to that adopted by the American wildlife managers. The disbursement of bounties for killing carnivores had begun in the early 19th century but was reorganised in a concerted manner at the all-India level in the 1860s. There is little doubt that there were indeed genuine conflicts between carnivores and people living on the edge of forests. But the huge rewards encouraged the killing of females and cubs. In the Delhi region alone, the official records show that 310 wolves, wolverines and cubs were killed for rewards between 1878 and 1883. The negative portrayal of carnivores in literature and the memoirs of memorable people reinforced the prejudices. Rudyard Kipling described the jackal as "desperately timid or wildly bold, everlastingly hungry, and full of cunning that never did him any good". The Indian rajas also contributed towards vermin extermination. British writer C A Kincaid praised the cricketer, Prince Ranji of Jamnagar, for his game management schemes where "trained Indian keepers would patrol the island and wage unceasing war against hawks, kestrels, rats, foxes and jackals,". "The dead bodies of vermin," he said, "were hung from the roadside trees as a warning to others."

The radical transition to preservation has been a relatively recent one. Unlike the herbivores, which won protection initially as game animals, and then to protect them from extinction, the carnivores have had to contend with deep-seated prejudices.

Paradoxically, state-sponsored extermination programmes, whether in America or India were, for a long time, seen as integral to "conservation". The wild dog in India and the wolf in America were sought to be eliminated to "save" the deer. The tolerance of feline predators like the mountain lion and the tiger came long before a similar shift in attitudes towards the less spectacular carnivores. In the '40s, Jim Corbett referred to the tiger as a "gentleman of the forest", but the wild dog had to wait for a few more decades for redemption.

Until the research done by A J T Johnsingh, now at the Wildlife Institute of India, and previously at Madurai University ('70s), most Indian foresters and wildlife managers saw the wild dog not as an essential part of the ecosystem but as a destroyer of herbivores. The bounty on the wild dog has been abolished and, along with the wolf, it is now a protected species. It was such research that provided us with a different view, more sympathetic to the wild dog and not dismissive of its vital ecological role.

But old habits die hard. As recently as 1987, a police party in the Velavadr Blackbuck National Park in Gujarat shot and killed 6 wolves within the protected area. The tragedy is that the hunters probably felt that they were doing the rare antelopes a favour by mowing down their predators. Still, India is not in the same league as the us, where millions of dollars continue to be spent each year on the eradication of coyotes.

The canines as a family were once the most widespread of mammalian predators. In South Asia, for instance, they included the grey wolf in the plains and the Deccan, and its Tibetan cousin in Ladakh. Then came the smaller lot: the Asiatic or golden jackal, and the Bengal fox. Today, only the smaller ones still have an extensive range. Similarly, the more wily predators, like the coyote in America, managed to survive the impact of such slaughter.

The American case is even more prosaic. Wolves now survive only in 2 of the 48 contiguous states of the us. The return of the wolf to the wilds of Idaho and Wyoming will be an act of poetic justice. There is little doubt that it was the predator that was the loser in its battle against the world the White settler created. But as the howl of Canis lupus will again be heard in the valleys of Yellowstone, one can be forgiven for raising a cheer.

Mahesh Rangarajan is a fellow at the Nehru Memorial Museum and Library, New Delhi