The revival of indigo

The revival of indigo 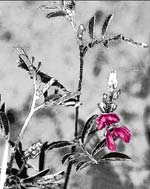 the indigo plant has been an enduring symbol of British exploitation throughout the independence struggle. It had caused the cultivators to protest against the unfair practices of the British Raj. Mahatma Gandhi started his first satyagraha at Champaran in Bihar against the British policy of Tinkathia system implemented on the indigo cultivators of the region. Champaran then was an important place for indigo cultivation. This later came to be known as the Champaran satyagraha.

The novel Nildarpan written by D N Mitra graphically illustrated the inhuman torture of the natives in the hands of the British planters also called neel sahibs. According to the Tinkathia system, farmers were allowed to take only one-third of the indigo produced by themselves while two-thirds had to be given to the British planters.
One of the major crops of north Bihar earlier, indigo has again recently been brought to the fields by Arun Kumar Prabhat, secretary of Prabhat Seva Sadan, a nongovernmental organisaton (ngo) working in the area.

In the pre-Independence period, indigo was extensively cultivated in the region by the farmers but suddenly the crop disappeared from the area. This set Prabhat, who is also a principal in a local school, wondering why a crop that was so important to the region disappeared all of a sudden and whether it was possible to revive it again.

He found that there was nothing to start with and the Britishers had taken away every thing from here. After some study, he got to know that the crop was also cultivated in Tamil Nadu.

He visited Chennai, purchased the seeds, learnt the cultivation techniques from the local cultivators there and started cultivation on his land near Muzaffarpur.
Prabhat purchased seeds at Rs 100 per kg from a cultivator in Chennai and found that 250 grammes were enough for one kattha (1760 square feet) of land. Then he selected a slopey highland for its cultivation as recommended by Chennai farmers.

Seeds were sown in well-ploughed fields in February. "Water is important for the crop but excess water can destroy it, therefore, land selection is an important part of its cultivation, " says Prabhat. The crop is ready in three to four months for harvesting.

The whole plant is then cut and readied for processing which is a complicated system. The plants are soaked in water for about 10 to 12 hours. After that they are slowly warmed. The layering of neel (indigo) occurs after warming and then they are filtered through fine thin cloth after which they are dried in shade.

Lastly, they are sorted according to the quality of the produce. Prabhat says, "The processing is very difficult, and we visited Tamil Nadu and Andhra Pradesh to know more about processing. We have tried it in our lands for the last two years as the crop had grown well. But we get only one-and-half kg of neel from one kattha land instead of the two kg as is the norm. We are trying to increase the productivity. After all, we havebeen able to perfect the technology and applied it to our fields with success. Now we are ready to promote it in domestic and later in international markets," adds Prabhat.

Marketing of indigo has its own challenges. It becomes very difficult in the light of the synthetic chemicals that has already captured the market. Prabhat says, "The synthetics used for the purpose will leave the indigo cultivators nowhere if proper marketing arrangement is not provided because the cost of cultivation is high and synthetic chemicals are available at very cheap prices."

He also says that the present herbal craze can save the crops and cultivators, and marketing will not be a problem if people understand that the product is safe and natural.

However, Prabhat says: "We are expecting a ban on the synthetic chemicals once a strong movement is created against it. Presently, we have a buyback arrangement with a party in Chennai who buys the product ranging from Rs 700 to 800 per kg, depending on quality of the product."
Now Prabhat is eager to share his experiences with fellows farmers. He is interested in promoting its cultivation in the region for their benefit. When asked about his plans he said: "Cultivating the crop is an attractive proposition in the region because it will fetch more money to the farmers in comparison to the traditional cash crops of chilli and tobacco. We will provide the seeds, the knowhow and the agro-technology for cultivation. Besides, we will also give proper training to interested farmers for processing the plants, which is a fairly complicated process. We are also offering a complete buyback agreement so that they do not suffer undue losses. And for those who are not ready for processing we will buy the plants and do the processing for them."