India with its deplorable rural roads can learn a lesson from Madagascar, which has successfully implemented a decentralised system of constructing roads 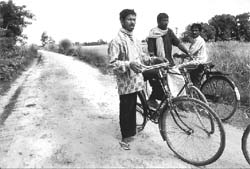 communication is vital for progress, and road links are crucial for this. A novel and viable approach for building rural roads and maintaining them was evolved in Madagascar in 1995. The approach advocates that the government, business institutions and local communities jointly undertake road construction projects. The need for such an approach was felt by the government of Madagascar during a political and economic crisis, due to which it was unable to look after roads in the rural areas. The lack of roads led to economic problems, banditry and lawlessness, as increasingly large portions of the country became inaccessible. Then, in 1995, the government began decentralising the power and responsibility of rural road construction and maintenance to village communities.

The implementation of the approach is entrusted to the Commercial Agricultural Promotion ( cap ) programme of the us A gency for International Development ( usaid ). The cap project, is part of an overall infrastructure building policy, which includes railroad and ports. A local people's organisation known as Associates Usagers de Pistes ( aup ), is authorised to maintain the roads and levy toll taxes. usaid 's programme contractor, Chemonics International, helps the villagers in identifying road builders and also training them for maintenance.
Once a village community applies for road rehabilitation assistance, cap undertakes a feasibility study, assesses the cost involved, the socio-economic benefits and the capacity of the villagers to work together. The assessment is reviewed by a provincial intersectoral committee. Applications are then listed on a priority basis and forwarded to a national committee consisting of representatives from the government, usaid and cap .

On approval, cap informs the local government concerned that it can provide funds either for rehabilitation or repair of the road. The local community is asked to take up the responsibility for maintenance. cap then begins organising the actual project. It defines the construction work required and puts out a tender, for which bids are invited from private contractors. The contractors have to consult the villagers regarding the site. Simultaneously, the aup is formed with the help of social organisers and it initially functions as a provisional committee. aup's most important task is to decide the road maintenance budget, estimate the expenses and identify the sources of income.

By the end of 1997, at least 13 aup s had been formed within the province of Fianar in the south part of the island. A total of 191 kilometre (km) of road was restored and maintained by these associations. This led to an increase in the amount of agricultural produce reaching the markets in urban areas.
India, with a total road length of about 3.4 million km, has one of the largest road networks in the world. A village without roads is likely to be entirely cut off during the monsoon. The condition of the roads in most rural areas is deplorable. The government has taken no steps to deal with the problem. State and district authorities are responsible for the construction and maintenance of village roads but large-scale corruption has led to a sad state of affairs. Due to a contractor-engineer-bureaucracy nexus, the common people have to suffer a lot while commuting. An excellent example is the Barabanki district of Uttar Pradesh. The state Rajya Krishi Utpadan Mandi Parishad (agricultural marketing association) has been building roads in the rural areas of Barabanki since 1976, but while driving through it is common to suddenly find large stretches of unmetalled roads. Such incomplete roads negate even the effectiveness of the completed stretches. "Prior to 1997, a lot of work was sanctioned without ascertaining the availability of funds. Hence, work has been stopped wherever minimal construction was done," explains R K Pandey, assistant engineer of the association. But the main reason behind these unfinished stretches is that contractors abandon projects midway. The road normally comprises three layers. The two lower layers consist of stone ballast and the third layer is the bitumen. The contractors usually make only the first two layers. They are discouraged to work further as they are caught between the village community, which wants quality work to be done, and the engineers, who demand 24 per cent share from their profits as commission. To make provisions for the commission, contractors often compromise on the thickness of the road in the urban areas. But, this is not possible in rural areas where villagers keep a watch on the activities of the contractors. As the road is built in three layers, the payment is also made in three stages. Usually, contractors take the payment for the first and the second layer and abandon the project without paying the commission. "If we pay the commission then we are bound to incur losses," says N K Shukla, a contractor working in the area.

Corruption begins with the awarding of the contract itself. "To get a contract, around four per cent of the funds allocated for the project have to be given as commission to the engineers of the association and another 24 per cent while the work is on. We keep at least 10-20 per cent as our profit, leaving only 50-60 per cent for actual work. This obviously affects the quality of the roads," adds Shukla. "The officials cause us a lot of mental anguish. They do not clear our bills and leave us with no option but to bribe them. Even our construction material is also often stolen by the anti-social elements in the villages," says Jawaharlal Gupta, another contractor working in the area.

But the mandi parishad officials are not the only ones responsible for the plight of the villagers. At times even the gram pradhans (village head ) want a share in the funds allocated for the project. For example, in Tewari village on the Lucknow-Faizabad road, a gram pradhan stole the road construction material when the contractor denied him a share. "At times the pradhans are responsible for stopping the construction work. But we have no say in the matter," says Umesh, a villager.


Can the Madagascar experiment be replicated successfully in India? The answer probably lies in decentralising the entire process of building roads. For example, in Kerala, village roads are now planned and built by beneficiary groups in the state. "The quality of the work will improve only if the funds are managed by the villagers," says Shukla. He further adds that village-level bodies independent of the panchayats, should be constituted to monitor the road construction projects.

If implemented the decentralised approach will ensure both completion and quality of roads. It will also help in effectively utilising resources and skills of all the sectors, especially the government and the civil society. It will also generate employment and lead to capacity building. Consequently, the dream of speedier development of villages in the country will become a reality.

Reported by Steve Waddell from Madagascar and by Aarthi R N from Barabanki district, Uttar Pradesh