How Diego Garcia became a US military base 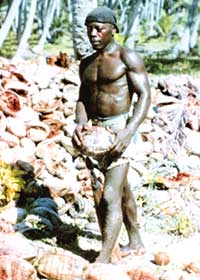 May 10, 2006, was a special day for the exiles from the Chagos group of islands in the Indian Ocean. On that day, uk's High Court ruled that they be allowed to return home. In the late 1960s, all indigenous Chagossians were evicted to make way for a us air base in Diego Garcia. The base was the launchpad for the recent us invasions of A fghanistan and Iraq.

A British colony located midway between Africa and Asia in the Indian Ocean, Diego Garcia once had more than 2,000 inhabitants. The ancestry of many of them goes back to the 18th century, when the French brought slaves from Africa to work in coconut plantations. After Napoleon's defeat in 1815, the islands passed on to the British, who bought indentured labourers from India. By the 20th century, the settlers had a school, a hospital, railways and docks. They had also developed a distinct dialect, a lilting French Creole. But tranquillity lasted only till the 1950s.

In 1961, Jack Grantham led a us survey team whose objective was to find an island suitable for a military base that would allow Pentagon to dominate the Indian Ocean. For the next three years, British and American planners inspected the Chagos group. Finally, the island of Aldabra was selected. The decision was kept a secret. It, however, leaked out to scientists of the Royal Society in London and the Smithsonian Institute, Washington. Aldabra's unique wildlife was in peril. The formidable academies mounted a campaign that saw off all plans to make Aldabra a military base. The island's wildlife was spared. The us team's second choice, Diego Garcia, however, was not. The island, though rich in biodiversity, was not exceptional enough to excite naturalists.

During the 1960s, the uk and us governments conspired to get rid of Diego Garcia's population. Gore-Booth, under-secretary at the British foreign office, wrote: "There will be no indigenous population except seagulls." The correspondence was conducted with great secrecy. Researchers did not get a whiff till well into the 1990s, when a cache of declassified official documents was discovered in the National Archives at Kew, in London. Says John Pilger, an Australian journalist and maker of Stealing a Nation, a documentary on Diego Garcia, "The documents provide the narrative of a conspiracy between the governments of the uk and the us to deport a population ... a crime against humanity as per the International Court of Justice".

In April 1964, Anthony Greenwood, colonial secretary in Britain's Labour Party government, flew to Mauritius -- then a British colony that included the Chagos archipelago, to spell out terms for Mauritius's independence. Britain would keep Chagos; the bribe was a mere three million, and a promise to support Mauritian sugar preferences. Pilger writes: "Britain's foreign office invented the fiction that the islanders were transient workers who could be 'returned' to Mauritius". Foreign secretary Michael Stewart took charge of the deceit. Writing secretly to prime minister Harold Wilson, he proposed that the government lie to the world that there was "no indigenous population".

In December 1966, a British signed a contract with the us giving Pentagon a 50-year "lease on Diego Garcia with an automatic extension of 20 years". Declassified state department documents obtained under the us Freedom of Information Act in 2005 reveal that Washington wanted the entire population expelled; it referred to the operations as " sweep and sanitise".

The islanders were intimidated into leaving. Those who had gone to Mauritius were prevented from returning. Charlesia Alexis, one Diego Garcia exile, told Pilger, "I left in 1967. My husband was ill and we had taken him to Mauritius for treatment. When we were ready to return, officials said they had instructions not to let us go back. They told us Diego had been sold." "They tried to starve us. There was no milk, no oil, no salt," another exile told Pilger. Then Bruce Greatbatch, governor of neighbouring Seychelles, who was put in charge of the "sanitising operations" ordered all the pet dogs on Diego Garcia to be killed. Almost 1,000 pets were gassed, using exhaust fumes from American military vehicles.

The islanders took this as a warning and the remaining population was loaded on to ships which plied between the Chagos islands, Mauritius and the Seychelles. The men were herded on to the bridge and had to crouch in rough weather; the women and children were made to sleep in the hold on a cargo of fertiliser: bird droppings. Arriving in the Seychelles, they were marched to a prison where they were held until they were transported to Mauritius.

In the first months of their exile, suicides and child deaths were common. Most suffered from depression. According to Pilger, "Unemployment, drugs and prostitution, all of which had been alien to Chagossian society, now ravaged them".


In October 2000, a few Chagossians flew to London to give evidence in a case that challenged the legality of their dispossession. The court ruled in their favour. But within hours of the judgment, the British foreign office announced that it would not be possible for the exile to return to Diego Garcia because of a "treaty with Washington". And in June 2005, the British government invoked an archaic royal prerogative to decree that the islanders were debarred from returning home.

After the recent verdict, they can go back. But the us government has let it know that it opposes "any return on security grounds". British authorities cite a study conducted in the aftermath of the 2000 judgment to conclude the impracticability of repopulating the Chagossian islands. "Life there would be precarious," they say.

"The study is a charade. No islander was consulted," excoriates David Stoddart of the University of Berkeley, California, and an authority on Chagossians. The Chagosians are bracing for another fight.