Its restriction in food can help India fight high BP 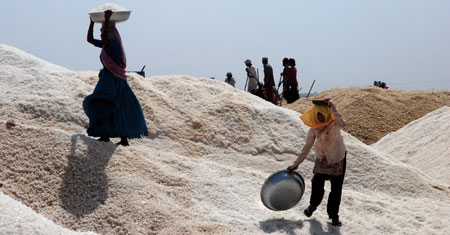 Researchers and policy-makers around the world stress on reducing salt intake to control hypertension because its key triggers— stress and faulty lifestyle—are difficult to control.

A human body removes extra salt through the kidney. When its intake is excessive, the kidney fails to perform its job and salt starts circulating in the blood. As salt attracts water the volume of the blood increases, thus causing the blood pressure to shoot up. Walls of the blood vessels and arteries react to this stress by thickening, leaving little space for blood to circulate. This leads to a further increase in blood pressure. As heart pumps against this pressure, it leads to heart-related diseases. To avert this, an adult must not consume more than five gm salt in a day, recommends the World Health Organization (WHO).

Governments around the world are making efforts in this regard. In 1994, the UK held health campaigns, collaborated with food manufacturers and asked for labelling of the amount of salt used in food products. In 2001, adults were taking about 9.5 gm salt per day. By 2012, the country aims to reduce it to six gm per day. A study published in medical journal The Lancet (see ‘World checks BP’, p29) indicates blood pressure among Britons has decreased. The UK government found that it had prevented around 6,000 premature deaths annually by reducing salt by 10 per cent in processed food, while also saving £1.5 billion (US $2.5 billion).

What are India’s plans?

For India, reducing salt intake is a challenge because there is no reliable data on the amount we consume. An ICMR survey in 13 states in 1986-88 shows an adult consumes 13.8 gm salt a day. The salt manufacturing industry puts daily consumption figure at seven grammes on the basis of sales. The National Institute of Nutrition (NIN) at Hyderabad, recommended in 2010 that salt intake limit should be reduced from 10 gm, which it had advised earlier, to five-six gramme per day.

The Public Health Foundation of India (PHFI), a New Delhi-based research organisation, held a meeting where experts identified that use of salt as a vehicle to deliver iodine could become a hurdle in controlling salt intake. But Chandrakant S Pandav, South Asia coordinator of the International Council for Control of Iodine Deficiency Disorders, says iodine programmes do not promote over-consumption of salt. So there is no conflict between promoting iodine and using less salt. “If the government decides to reduce consumption through legislation, simultaneous changes could be made to increase iodine in salt,” he says.

When WHO introduced guidelines to restrict salt consumption to five gramme a day, the Salt Institute in USA opposed it. In India, however, manufacturers are not too bothered. Reducing salt by one gm (from seven gm to six gm) is not too difficult for the industry, says Hiralal Parakh, member of the Indian salt manufacturers’ association, Gujarat. The industry has also started manufacturing salt low on sodium, Parakh says.

It may, however, be difficult to convince the food manufacturing industry. Industry big shots met in January this year in Mumbai to discuss the NIN guidelines and find ways of reducing salt in food and beverages. When Down To Earth contacted a few manufacturers on the steps they were planning, they declined to comment. These manufacturers are Pepsico India (makers of Lay’s chips, Uncle Chipps), Nestle India (Maggi noodles) and ITC (Bingo brand of snacks).

A representative of Kellogg’s, however, says they have an active action plan in place “despite breakfast cereals not being a significant source of salt in a diet. In 2010, we reduced 50 mg of sodium in every 100 gm of cornflakes. We will further reduce it without compromising on the product’s quality,” he says. Consuming less sodium is essential as it reduces hypertension, says Umesh Kapil, professor of public health nutrition at the All India Institute of Medical Sciences in Delhi. Though companies have started manufacturing low-sodium salt, they cost one-and-a-half times more, he says. He also suggests food labels must indicate the amount of sodium present.