Want to know about a lost variety of rice or a cure to asthma? Answers lie in the notebooks of schoolchildren and women of the Sundarbans and Madhyamgram, says Sayantan Bera 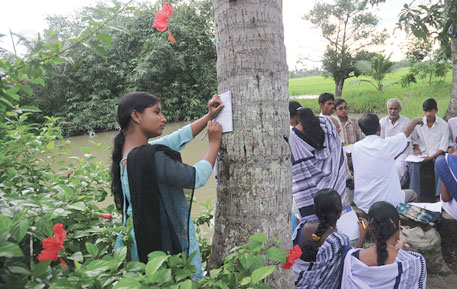 Worlds can change within minutes, or kilometres. It was the bumpy six-hour ride from Kolkata to a tiger reserve in the largest riverine delta in the world, that told me this. Hopping islands in the Sundarbans onboard Rs 1 ferry rides, on rickety cycle vans dancing on puddles, and walking on slippery brick ways, the arduous journey is not for the big cat though. I am to witness the beginning of a stupendous task: documentation of life in its myriad hues.

The task attempts the rigorousness of serious anthropology by schoolchildren, some as young as 13. During this simulation exercise the students are to assimilate knowledge of generations on plants growing unrestrained and cultivated, and on animals wild and domesticated. Outside the Rajat Jubilee High School is a motley crowd of 15 students from two local schools speaking to village elders. The school is on the 20,000-hectare Satjelia Island, a part of the Sundarbans delta that crisscrosses India and Bangladesh.

About a week ago, senior researchers from the West Bengal Biodiversity Board (WBBB) had organised a workshop to explain to these students the need to document local flora and fauna. They explained how traditional knowledge of the lost varieties of plants and animals could be gathered from village elders.

Sitting close to a pond, 71-year-old Binay Mandal starts a story. “Our land has lost more than 60 local varieties of rice, including patnai, rupsal, gopalbhog, chinikari, koibhuri, kumrabori,” he wants to go on, but 17-year-old Prasenjit Mandal interrupts, “We have other varieties now, so why are the local ones important?”

“After Aila hit the Sundarbans,” explains the 71-year-old, “we could not grow rice for two years. Salty water from the river invaded the fields and the high-yielding varieties failed. Many of our traditional varieties were tolerant to salinity.” The super cyclone that hit West Bengal and Bangladesh in 2009 had brought telling miseries to people.

The discussion starts to ramble, but Binay returns to rice cultivation. “Use of pesticides to cultivate high-yielding varieties has poisoned the water. Local fish which thrived in the submerged paddy fields and ponds have declined in number. How many of you have seen the nyadosh fish? When caught it would pretend to be dead and not move at all,” he says. No wonder it is called nyadosh, colloquial Bengali for stupid. “Today many delicate varieties have disappeared due to use of pesticides. With the fish gone, the birds and earthworms which thrived on them have also declined,” he says.

The exercise in making inventories soon began to find ways to conserve lost species and revive the rare ones. “We can try to bring back some of the traditional varieties of rice. Ranjit Barman has cultivated ghayus this year, Padma Mandal is cultivating jhingasal. We have to preserve the seeds from them,” Binay pauses, while the schoolchildren busily scribble in their notebooks.

The documentation exercise “is like a class struggle in conservation,” a lucid Silanjan Bhattacharya had explained the evening before. “It was an elitist approach that earlier dominated forest conservation and protection of glamorous vertebrates. Residents of the area, deemed ignorant, were kept at bay,” he said. Bhattacharya, who teaches zoology at the West Bengal State University, was a student of the renowned conservation biologist Madhav Gadgil at the Indian Institute of Science in Bengaluru.

Gadgil had pioneered documentation of biodiversity involving students and teachers. The first such experiment was carried out in the Western Ghats in 1996. “Village elders were our teachers and we their diligent students, eager to learn,” recalls Bhattacharya with a smile. 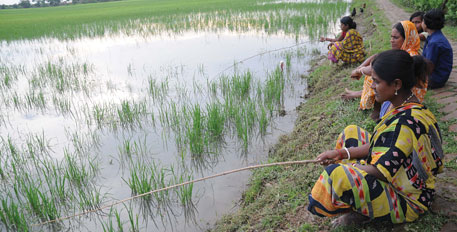 In 2002, the National Biodiveristy Act (NBA) was formulated. Its mandate is to conserve and sustainably use biological diversity, respect and protect the knowledge of local communities and ensure sharing of benefits with people when such knowledge and resources are commercially used.

The Act was the outcome of the Brazil summit in 1992 in which 180 countries had gathered at Rio de Janeiro. The summit led to the convention on biological diversity (CBD). “The present scientific knowledge is insufficient,” says Bhattacharya. “For instance, we know little about the indigenous varieties of agricultural crops created by people in the region, or the medicinal and ecological value of different species that are passed on as oral traditions.”

The people’s biodiversity register is an attempt to fill this knowledge gap. Under the NBA, all local bodies are statutorily required to constitute biodiversity management committees. The committee is tasked to document and conserve biological resources at the local level.

In 2000, before the NBA was enacted, Bhattacharya had attempted a biodiversity register at Teligram, a village in Hoogly district. The results, he says, were striking. “Teligram was an antithesis to the apparent bias in choosing a village for the exercise to create a biodiversity register. It did not have a forest patch or a wild wetland nearby, nor was it a tribal village. And I wanted exactly that.” It had the minimum level of biodiversity on which the village was dependent. Bhattacharya called it a “ripe case of ecological bottomline”.

Surprisingly, the Teligram biodiversity register found an array of wild biodiversity in herbs, fishes and 15 varieties of wild animals. Many of these were used as food or medicines. The exercise also discovered more than 25 indigenous rice varieties, of which only two survived the introduction of input heavy high-yielding varieties.

The Teligram model and a few other experiments gave a guiding format for the exercise to create a biodiversity register. The model register rests on three broad categories—landscape, lifescape and peoplescape. Under landscape, the nature of land use, varieties of cultivable land, ground and surface water resources are recorded. Lifescape is divided into two subcategories—plants and animals, both wild and domesticated. Local names are recorded along with their traditional uses. An inventory of the lost species is also prepared. The section peoplescape enumerates families according to caste, livelihood, nature of dwelling and cottage industries.

The model also creates a database of individuals who know about the traditional use of local biodiversity. The various religious rituals surrounding the local flora and fauna are also recorded. To validate the knowledge acquired, local names of plant varieties are corroborated with their scientific name. The validation exercise is done by the anchoring non-governmental organisation with the help of researchers from the state biodiversity board.

Documentation of biodiversity at the Sundarbans is one such exercise. “With little medical facilities, people here use more than 35 varieties of mangroves to treat diseases from diabetes to stomach ailments. There are about 300 varieties of fish and more than 164 varieties of birds. But many are lost. We hope the exercise helps preserve this diversity,” says Manatosh Mandal, secretary of Sunderban Comprehensive Area Welfare and Environment Research Centre (SCAWERC), the non-profit anchoring the exercise to make a biodiversity register.

Another case of “ecological bottom-line”, as Bhattacharya had suggested, is the suburban confine of Madhyamgram, barely 10 kilometres from the Kolkata airport. A day after seeing schoolchildren actively involved in the documentation process in Madhyamgram, I witnessed women taking the lead in documenting traditional knowledge. A biodiversity management committee was formed here in May 2011.

“Women have easy access while talking to the elderly. Besides, they are interested in knowing about medicinal values of local plants,” says Bulganin Mitra, chairperson of the biodiversity management committee. He is a scientist at the Zoological Survey of India. 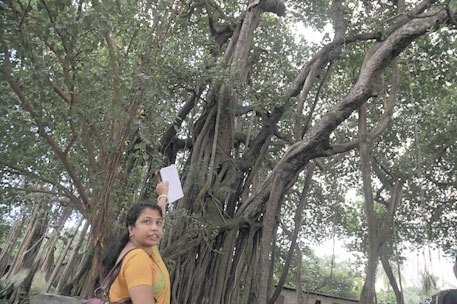 Brimming with excitement is 35-year-old Anindita Mitra. “We always knew that the leaf of bichuti (Tragia involucrata) was an irritant to the skin, but were surprised when an elderly told us it cures skin diseases when consumed after boiling,” she says.

Jhumur Sarkar, another woman joins in. “Jhalpata heals wounds so well that one can do without stitches. The smoke of burning basak leaf (Adhatoda vasica) is potent for asthma. Leaves of olat kambal plant (Abroma augusta) cool the stomach, while white nayantara (Catharanthus roseus) is an old cure for ovarian cancer.”

Having gathered many such information from Sheikh Wajed Ali, a traditional healer, Jhumur and Anindita have made a documentary film on the subject. The 50-year-old was introduced to Unani medicine by his father. “The herbs and roots formulations I prepare can treat hair loss, diabetes, skin diseases and gall bladder stones,” claims Ali.

“The biodiversity management committee now plans to revive native varieties of herbs and trees that are fast disappearing. We are requesting households not to cement their garden area and maintain a wild patch instead,” says Bulganin Mitra.

“We no longer get bramhi shaak (Bacopa monnieri), a leafy creeper, traditionally used to enhance memory. It has disappeared from the local markets as well. We found that Kolkata-based Branolia Chemical Works, that manufactures ayurvedic medicines, buys it for Rs 20 a basket from the local markets,” complains Rina Bakshi.

According to Soumyendra Nath Ghosh, scientist at the WBBB, “Use of traditional knowledge for commercial purpose is still a grey area in the biodiversity Act.”

The board has compiled 21 biodiversity registers, while another 32 are in the pipeline. At present, 33 management committees are at work in 15 districts of West Bengal. According to the National Biodiversity Authority, 932 biodiversity registers have been published across eight states in India. Information inside the registers is not made public with the apprehension that it might be commercially exploited.

Notably, India accounts for seven to eight per cent of the recorded species in the world and is considered a mega-diverse country.

“We must not forget about the activities after the register is created. There is a need to take up ecological restoration, like creating seed banks of indigenous crops, or look for income generating avenues,” says Bhattacharya. He expressed fear that since the registers are a statutory requirement, their preparation might turn out to be more obligatory than becoming a rich source of traditional knowledge.

“Since mass production of PBRs can compromise quality, we seldom engage the same non-governmental organisation to anchor multiple PBRs,” says Debal Ray, chief environment officer of West Bengal and member secretary of the state biodiversity board.

To find answers to the grappling question of access and benefit sharing, Ray mentions the United Nations-funded project on traditional knowledge. A first of its kind, the Global Environment Facility project was launched in August 2011 involving five states, including West Bengal, with a timeline of four years. “If a corporation wants to access traditional knowledge it should have prior and informed consent (PIC) from the local community,” says Ray. Under the biodiversity Act, the management committees will have to give the consent and arrive at Mutually Agreed Terms (MAT). But local communities might not have the required negotiation skills to deal with a corporate. The project is about empowering them, he adds. Looks like the Prasenjits of Sundarbans and the Jhumurs of Madhyamgram need to familiarise themselves with acronyms like PIC, MAT and CBD.