Hurricane Mitch leaves Nicaragua and Honduras devastated, and over 10, 000 dead 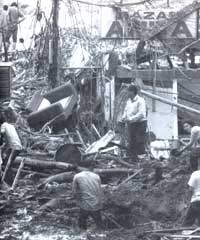 IT HAD been raining incessantly. On the third day, amid the dankness, everyone heard a roar. Some thought it was the sound of helicopters that had come to evacuate them. Only a few saw a gigantic moving wall of mud rear up into the sky. Before they could react, a mudslide descended and swallowed four villages in Nicaragua and buried more than 1,500 people alive. In Honduras, the Choluteca river's muddy waters cascaded through the city of Choluteca carrying off people and houses and wiping out roads and bridges.

The last few days of October and the first few of November saw Hurricane Mitch pound the two Central American nations without mercy. The trail of destruction it left behind is unfathomable. All that remained were bodies- 10,000 at the last count. More than 15,000 were missing. Over 10 per cent of the 11 million people were left homeless.

In Honduras, the worst-affected of the two, reports estimated 7,000 dead, one million homeless, most highways and bridges destroyed and 70 per cent of the crops wiped out. Terming it as the "worst disaster of the century", Honduran president Carlos Flores said almost 75 per cent of the country's infrastructure had been either "destroyed, damaged or torn apart". In Nicaragua, the death count was between 1,800 to 2,400, most of them victims of the mudslide that was triggered when the slope of the Casitas volcano collapsed. Almost 500,000 homes were damaged and communication links broken.

Mitch literally declared war on the Central American nations. Landmines, laid during the regions' many civil wars were violently relocated by the floods and mudslides. Nicaragua has the maximum number of mines in Central America, an estimated 73,000. The information specialists had gathered about their location is useless now. Also, the large amount of mud debris will hamper future mine-detection efforts.

The hurricane, the fourth strongest ever in the Atlantic basin, packed winds of nearly 300 kilometres an hour. But most of the damage was done when Mitch dumped as much as 65 cm of rainfall in one day, especially in areas where there was little or no vegetation, mainly due to deforestation. Logging, hillside farms, and rampant housing development intensified mudslides and floods. In Honduras alone, loggers and farmers have stripped away more than 9,000 hectares of forests every year.

To avoid tragedies like the one caused by Mitch, the world needs to focus attention on global warming. Says Max Campos, of Costa Rica's Meteorological Institute, "There is no doubt that the effects of La Niha have been intensified by rising global ternkratures." La Niha is the counter current, which follows every El Nino. "For hurricanes to start, ocean temperatures need to be 26'c or more," says Campos. The more the temperature rises, the better the conditions will be for the formation of "mega-hurricanes" like Mitch.

According to the Inter-American Development Bank, floods and mudslides have destroyed 90 per cent of Honduras' roads, bridges and power lines. Large chunks of the Pan-American highway, the crucial link for Central America, has been swept away. Overwhelmed by the need for relief work and frustrated by broken communication links, the two nations have yet to calculate the magnitude of the losses - roughly US $1 billion in Nicaragua, and US $4 billion for Honduras.

Rebuilding the nations' infrastructure is the top priority for the governments, though it could take two to four years. Be it bridges and roads, houses for the homeless, or creation of jobs for the scores unemployed, the governments' face a daunting challenge ahead.

Honduras and Nicaragua need new homes for an estimated 25 per cent and 20 per cent of the population respectively. The government plans to discourage construction in flood-prone areas such as riverbanks. "Unfortunately, some people will go back and rebuild their homes there. And when the next flood comes, the same thing will happen," said Arturo Corrales, information coordinator of the Honduras government.

But before everything else, there is an urgent need to build bridges, without which the governments must rely on planes and helicopters to get emergency food and medicine to needy areas. And that could be costly. Honduras alone faces the task of rebuilding 94 bridges.


The threat of a famine looms large. Destruction of crops will have a severe impact. Agriculture plays an important role in the economies of Central America. In Honduras, for instance, about 54 per cent of the work force is employed in the agricultural sector. The storm wiped out as much as 70 per cent of the important crops in Honduras and Nicaragua, along with most of the roads and bridges needed to carry the produce from the mountains to the markets.

Coffee and bananas - the two vital sources of export income - were hit especially hard. Honduras lost one-fourth of its coffee plantations. A local manager of Standard Fruits, the largest producer of banana - the country's second largest export after coffee - said 75 per cent of the banana plantations have gone, Shrimp farms, citrus and sugarcane have been wiped out. Small farmers have lost everything.

Central American countries account for nearly eight per cent of world's coffee supplies, of which Honduras and Nicaragua have a high share. Their quality arabicas are exported largely to the US. But because the torrential rain damaged crops and washed away transport links, the future of coffee planters and traders looks bleak.

Mitch has also put thousands of people out of work. Agriculture accounts for 25 per cent of Honduras' Gross Domestic Product (GDP). In Nicaragua, it accounts for 15 per cent of the GDP and employs more than 40 per cent of its work force. The government has offered 10,000 temporary jobs, such as removing debris from roads at a weekly salary of US $10. Similarly, aid groups are supplying foodstuffs to workers clearing roads. But the work will be temporary, and when it ends, the victims will be left wanting.


The storm is over but it has left behind more problems to tend to besides floods and mudslides. Disease, starvation and accidents are raising the death toll. Thousands of bodies and sewage contaminating drinking water supplies have raised the possibility of epidemic. Authorities fear an outbreak of cholera and other water-borne diseases. Overwhelmed by the number of dead, they are burying bodies in mass graves.

"We're surrounded by mud, waste and contaminated water," said Menecan de Manzia of the Honduran Red Cross. "This is going to cause epidemics." In Tegucigalpa, Honduras, millions were left without running water. Fuel was being rationed, and food was in short supply. In Honduras alone, 700,000 people will need food aid for the next month, the United Nations World Food Programme representative, Giuseppi Lubatti, estimated.

In Nicaragua, health officials were battling an outbreak of the disease leptospirosis, with 104 suspected cases, including seven deaths, as well as tens of thousands of other cases of dangerous illnesses. Leptospirosis is a disease of domestic animals, that spreads to humans under conditions like those left by Hurricane Mitch.