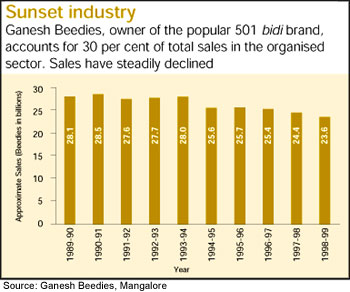 The tendu tree (Diospyros melanoxylon) is found widely across central India. Leaves plucked from its shrubs are used to wrap bidi, the poor man's cigarette. About 550 billion pieces of bidi (rolled by 10 million people) are sold every year in India, according to the All India Bidi Industry Federation. Moreover, gathering tendu is labour-intensive and employs millions of tribals during the lean month of May, when they have very little else to earn from.

It was in the 1960s that governments realised the commercial value of tendu. Most of the land from which tendu was plucked belonged to the state governments. Tendu leaves were sold unplucked to contractors, who under-reported the collections. This resulted in revenue loss. The tribal people who collected these leaves also got precious little. Several states decided to change this and passed laws to 'nationalise' the tendu trade in the 1960s-1970s. The purpose: to ensure maximum revenue for the governments and better returns to the tribal collectors. The most crucial in this was Madhya Pradesh (MP), the largest state in India at that time. Before Chhattisgarh (CG) was created out of it in 2000, MP produced about 45 per cent of the country's total harvest of tendu. Now, it is about 25 per cent. The collection of leaves and rolling of bidi constitutes a sector worth an estimated Rs 2,000 crore in MP and CG.

When the MP government monopolised the tendu trade, the state was carved up into 1,826 collection units. Collection agents were appointed for each unit, responsible for getting the leaves plucked and delivered to the buyer.


"The agents and buyers were from the same business interests and they misrepresented the collection and sale figures to cheat the government of royalty," says Ranu Bhogal, Bhopal-based forestry researcher. Loss of government revenue and collectors' wages continued unabated.

This changed in 1980, when the state government started charging lump sums on rates based on 15-year averages. Government revenue increased, but the collectors were still underpaid. Tribals represented a large proportion of the state's population, and any move to benefit them was likely to garner political support. Arjun Singh, chief minister in 1984, saw this opportunity. He created the MP MFP (Trading & Development) Cooperative Federation Limited. The forest department was entrusted with the collection. The first two years saw the tribals' earnings rise, and Singh's political career rose in direct proportion. Nationalisation was a good means to further the Congress agenda and take the trade away from the contractors', by and large supporters of the Bharatiya Janata Party.

"The system worked well for the first two years. The MFP Federation became a cash rich organisation. Then populism took over. The wages paid to the collectors began to be hiked before elections," says a senior official, in the MP administration at that time. Seeing such money happening, non-tribals got into the act. Soon, tractors started going into the forest to pull out entire plants. Although care was taken to appoint officers with good reputations to the MFP Federation, corruption in the forest department ensured that the federation started losing money. Other states started taking the tendu business seriously. (Saxena points out that Orissa accounts for 13 per cent of total tendu leaf production in the country today and produces the best quality leaves; it accounts for 75-80 per cent of the total revenue from forest.) Having cornered the tribal vote, the state government set its eyes on the bidi workers - it hiked the minimum wage of the bidi workers, much to the chagrin of the bidi industry. The industry responded by moving out of MP to neighbouring states like Maharashtra.

The MFP Federation had been envisioned along the lines of a cooperative. In 1988, a three-tier cooperative structure for the tendu trade was established to promote people to take over the trade. In 1998, an executive order was passed in MP to implement the Provisions of Panchayats (Extension to Scheduled Areas) Act, 1996 (PESA). Under this, the net profit of the tendu trade was to be returned as bonus to the collectors, the 'owners' of MFP under PESA. Now, 50 per cent of the net profit goes directly to the gatherers, 30 per cent to the primary cooperative societies (to be distributed in proportion to the leaves collected), and the remaining 20 per cent is used for the purpose of regenerating forests.

The nationalisation of tendu in MP was indeed a success in that it improved the economic lot of the primary gatherers. Orissa, by contrast, does not pass on the profits from the tendu trade to the gatherers. But even in MP, neither the cooperative structure nor the provisions of PESA were implemented truly. The MFP Federation became a cash cow, and the government didn't want to give up control over it. Till date, the administrative control of the cooperative structure is with the forest department, be it the primary societies at the village level, the district-level societies, or the state-level society. In fact, 18 years since its creation, the members of the state-level coordinating body are nominated, not elected.

"No village committee can handle a trade of more than Rs 200 crore. The nationalisation is merely to help people sell the produce. If the government gives up all control, market forces would take over, and things would revert to what they were in the 1960s," says K K Chakravarty, forest secretary of Chhattisgarh. But the fact is that nationalisation has created its own problems, such as a declining growth rate of the collection after a rise in the 1980s (see table: Lessons of a leaf).

The bad news for the tendu trade is that the bidi industry is declining. "Bidi is losing popularity to the tobacco gutkha. Our business is dying a slow death," says Ghanshyam Garg, president of the All India Tendu Patta Traders' Association (see graph: Sunset industry). The association itself has almost closed shop. As part of their future plan, the MFP federations of both MP and CG have started diversifying into other areas - the problem is that there is no other MFP that has a demand and market as stable as that of tendu. The leaf that launched a thousand political careers is losing importance.