The People's Judicial Enquiry Commission probe into the Muthanga incident in Kerala sheds new light on this burning issue, which is causing plenty of turmoil for the Kerala government. The commission comprises of three people, two retired High Court judges -- H Suresh of the Bombay High Court and P K Shamsuddeen of the Kerala High Court -- and Manjeri Sunder Raj, a lawyer. Eminent jurist V R Krishna Iyer has appointed the commission on behalf of the Forum for Democracy and Communal Amity 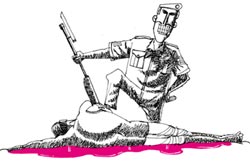 The People's Judicial Enquiry Commission probe into the Muthanga incident in Kerala sheds new light on this burning issue, which is causing plenty of turmoil for the Kerala government. The commission comprises of three people, two retired High Court judges -- H Suresh of the Bombay High Court and P K Shamsuddeen of the Kerala High Court -- and Manjeri Sunder Raj, a lawyer. Eminent jurist V R Krishna Iyer has appointed the commission on behalf of the Forum for Democracy and Communal Amity. Several social and cultural activists, senior advocates and law students are also helping in the investigations.

The commission recently released a preliminary report on its findings. In the foreword, Justice V R Krishna Iyer takes up cudgels on behalf of the adivasis, terming them, "the lowliest, the lost and the last sector our community." He laments that, "Several tantalising strategems and evasive legislations have put out tribal hopes. Political parties of all hues and pretenses have victimised these unfortunates (adivasis) by legal devices and sloganeering contrivances." Krishna Iyer castigates opportunistic politicians and parties for trying to eke mileage out of the Muthanga incident. "Polemical politics sleeplessly waits for such occasions. Whatever their real sympathy, the front in power and the opposition front went into action, while the adivasis struggled for survival," he accuses.

The jurist found it ironic that the opposition Left Democratic Front should righteously demand an enquiry into the Muthanga incident, reminding that this political party had "left the adivasis in the cold, offering little and giving less," while they held power. Krishna Iyer ends his foreword stating that, "The quintessence of the tribal issue is their human right to live with dignity in their lands. Rob their lands, their life is robbed. Restore them to their forest surrounding as of right and you do the adivasis justice."
Krishna Iyer prescribed a few terms of reference for the commission which include the history of the adivasi struggle, the reasons for the delay in restoring alienated adiavasi lands to landless adivasis, and the drawbacks and changes required in the adivasi land laws in the light of legislations passed in 1975, 1996 and 1999. Other terms of reference include the causes for the delay in the implementation of the agreement between the Kerala government and the Adivasi Gothra Maha Sabha and the circumstances leading to the Muthanga agitation. The jurist also prescribed the commission to investigate whether the violent confrontation and the alleged violations of the human rights of adivasis, social workers and media persons in its aftermath could have been avoided.
The preliminary report condemns the police action in Muthanga as excessive and "totally unwarranted". The report reveals that about 500 armed police personnel from Kannur were dispatched to Muthanga for this operation. According to official statements two persons, a tribal and a policeman, were killed. The tribals dispute this version and allege that 16 adivasis were shot dead during the melee. "Our prima facie reaction is that this exercise of excessive police force could have been wholly avoided and the matter could have been resolved without causing death or injury to any one,'' the report states.

The committee reveals new information on the events immediately prior to this confrontation. On February 18, the district collector (name not provided) had visited Muthanga and persuaded the tribals to release the hostages they were holding. The matter appeared to have been solved that day. But the collector did not inform the adivasis that they would be evicted forcibly the next day if they did not leave the sanctuary. The report argues that the adivasis have the right to know on what basis this decision was taken. It informs that the collector did not go to Muthanga the next day.

When questioned by the commission, the district collector revealed that the decision to use force was taken by him along with government officials, on the basis of instruction received from the state and central governments. But the collector refused to elaborate when pressed for more details.

The report finds gross violation of the law, as well as human rights, even after the February 19 police operation. Adivasi men and women were taken to a police station and brutaly assaulted. Some women and children were taken to the forest range office and kept captive for three days. The report further reveals that, "Even today (a month after the violent incident), a child is in custody on charge of murder, which is contrary to the Juvenile Justice Act.'' The commission also charges the police with failing to follow Supreme Court directives (D K Basu vs State of West Bengal) on arrest and custody. The police, in fact, "behaved as if they were not answerable to any one'', the report scathingly observes.

"There is no provision in the Constitution giving any right to the police to kill any person," the commission states. "Such a right occurs only as an act of self-defence as provided under Section 100 of the Indian Penal Code. That defence will have to be proved and established in a trial, in a court of law. In other words, every killing by the police, for whatever reason, will have to be subjected to a judicial inquiry followed by efficient administrative action,'' the report informs. The committee also enquires whether proper criminal procedures were followed in the government's investigation of the shooting incident. "Under the criminal procedure code, only an enquiry by the executive magistrate is envisaged. We do not know whether any such enquiry has been carried out."

The commission holds the Kerala government responsible for the tragic events of February 19, while absolving the adivasis of any blame. " Prima facie, the government of Kerala should be considered liable for whatever has happened from the day they (the adivasis) occupied the Muthanga lands till now.'' The report points out that, "The government had failed to respond to this protest (adivasis' forest occupation) and solve the issue by peaceful means.'' The committee also questions the motives of the Kerala government in handling the issue, "Whose interest was the government serving? Its own? Or the tribals? Or the interests of land grabbers and land mafia?"

The committee expressed scepticism on the Kerala government's intentions of fulfilling its pact with the adivasis and doubted if it had designed a "practical solution, which will guarantee performance of the agreement to which the chief minister is party."


The commission then turns its guns on the role played by the Central Empowered Committee (cec), a body set up by the Supreme Court for advice on forest protection. The report alleges that this organisation, which comprises of the "top brass of the ministry of environment and forests (moef)", has been delivering decisions "without caring for consequences".

The report reveals that at the instance of a Delhi-based ngo, the cec had goaded the moef into sending a "strongly worded letter" to the Kerala government. The committee draws a distinction between the approaches of the Supreme Court and the cec in matters relating to the resettlement of tribals living in forest lands. While the Supreme Court unfailingly requests states to provide comprehensive details on their plans to resettle people living around forest fringes, the inconsiderate cec, "a bureaucracy incarnate", takes the easy way out by issuing eviction notices to tribals living in forests, the report states.

The commission has indicated that its final report would be made available soon. It is deliberately being delayed to include the Kerala government's version of events, if made available. The report complains that thus far, the state government's various agencies, as well as police officers, have refused to divulge the details and circumstances leading to the tragic firing incident. The commission granted ten days for the government, the chief conservator of forests and police officials involved in the case to respond to the interim report.