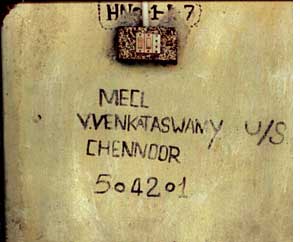 V Venkataswamy u/s--a small sign painted in grey beside the door of a locked house in the new weavers colony of Chinnur in the Adilabad district of Andhra Pradesh. It is an image from a visit almost a decade ago, but it remains vividly etched in my mind. So does the story.

U/s stood for unskilled and this is what Venkataswamy had advertized about himself. I never met Venkataswamy, but was told he was employed as a chowkidar in the Mineral Exploration Corporation Limited--in the identity card issued by his employers he had been identified as V Venkataswamy u/s.

He gave up the chowkidar's job, moved to Bhilai to work as domestic help for a while and then came back to Chinnur to make a living as an autorickshaw driver.

The unskilled Venkataswamy was in fact one of the finest weavers of cotton handlooms in the entire region.

Why did Venkataswamy give up weaving? How did he get the u/s label? Why did he accept it? Did he not believe weaving needed skill? What kind of a system do we have that turns a craftsperson into a daily wage earner and then brands him u/s? 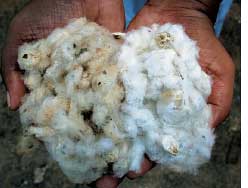 Certain basic facts might help explain the continued and vital relevance of this industry to the country and place the unskilled story in context. Andhra Pradesh is a good case in point. Not only is the state known for some of the most famous handloom traditions like the khadi of Ponduru, the silks of Pochampalli and the handloom sarees of Mangalgiri and Gadwal, it also provides employment to nearly 200,000 families across the state and generates an annual output of more than Rs 1,000 crore. A large number of families are also involved in activities that are considered ancillary but critical to the handloom production cycle.

The national scenario is not very different--an estimated 12 million families are employed in the handloom sector that produces nearly 13 per cent of the nation's textiles. It is a livelihood that is rooted in the local context of the weaver, is completely in control of the weaving family, involves high degree of skill and precision and is one of the most environment friendly and economically viable activities, whose carbon emission, for instance, is virtually nil.

That the handloom industry has not got the kind of understanding and support it deserves from the State, from society as a whole as also from the consumer, is well known. What is perhaps less known is in the past few years there have been a number of promising initiatives that connect the weaver with the rapidly changing realities of urban markets and design sensibilities that are constantly evolving. There is a whole basket of such new attempts--larger ones like the entrepreneurship based business models of Fabindia and Anokhi; non-governmental initiatives like those of Urmul in Rajasthan and Dastkar Andhra in Andhra Pradesh and smaller, localized ventures like the Charkha Weavers co-operative run by dalit women in Karnataka's Shimoga district. Hundreds of other weavers co-operatives work well across the country and there is also a growing interest in the international market. These initiatives prove that the concern over the viability of handlooms is misplaced.


The point was driven home to me recently when I visited the small village of Kolluru in Adilabad district. Eight youngsters here have recently taken up weaving as part of an initiative of the non-profit Dastkar Andhra. Talking to those enthusiastic youngsters revealed that all stories need not be like that of Venkataswamy's. Like a large number of young men in rural India today, these eight had no permanent jobs earlier. What they managed at best was 15 days of agriculture labour work a month.

"I used to work on fields, spraying pesticide," said 21-year-old Sampath, who is part of this group of new weavers. "The monthly income was never more than Rs 2,000. After I have taken up weaving, my income has gone up to Rs 3,000." This is far less strenuous compared to labouring on fields or construction sites," added Sampath's colleague Bhaskar." Putting up a loom requires Rs 10,000. The nature of the profession is such that more family members can join and boost income. "We feel proud," Sampath said, "when we wear what we have woven and see others wearing our fabric."

The choice before India is evident. More Venkataswamys of Chinnur? Or more Bhaskars and Sampaths of Kolluru? Does the question need be asked even?

Pankaj Sekhsaria is a journalist and photographer. His first photographic exhibition on Andhra Pradesh's cotton handloom industry was held in 2008