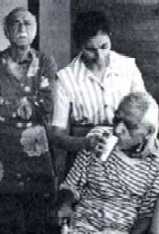 FOR INDIA'S aged citizenry, some good news lies ahead. The country is expected to have 76 million 60-plus people by the turn of this century, but the government's response remains blinkered to pension schemes. Now, many voluntary groups have taken on the work of providing care and warmth to the elderly.

HelpAge India, an NGO, is one of the major fund-raising organisations in this area: it provides financial assistance, consultancy and training to about 500 voluntary organisations in India. It provides aid to the urban poor through mobile medical units which periodically visit slum areas. Says N group captain A W Limaye, "We are now trying to change our earlier approach of just giving them some money or setting them up in institutional homes. Instead, we are now trying to settle the elderly in their own environment."

This organisation also undertakes research to further its understanding of age-care needs. HelpAge India, Bombay, generates data on the demographic, health and disease status of the elderly population of Greater Bombay. The objective of the research programme -- the "bio-medical gerontology project" -- is to collect and analyse data on the influence of age on the human physiognomy and identifying the major indicators of age-related morbidity. The data will help in locating and designing appropriate measures against (preventive measures for what and what preventive measures?) to keep the elderly population in good health.


St Mary's Home provides succour to those women set adrift as a result of the break-up of the joint family system: residential accommodation, food, medical aid and an atmosphere of peace and solicitude. For most women, this service comes gratis, but those earning pensions have to pay a nominal sum.

Sandhya is another pay-and-stay home for senior citizens. A joint effort of the New Delhi Municipal Corporation (NDMC) and Age-Care India, another voluntary organisation, this home is equipped with modern facilities and has a maximum capacity of 50 residents. Age-Care India has also adopted three villages around Delhi -- Dera, Fatehpur Beri and Mohammadpur Shahabad -- to provide regular geriatric health check-ups. It counsels old people and their families and has been organising seminars and conferences on geriatrics.

Senile dementia, a progressive geriatric disease of the brain which impairs memory, personality and intellect, causes disability in 5-10 per cent in those over 60. Dementia is likely to assume alarming proportions in India with the increase in the number of the aged. The Alzheimer's and Related Disorders Society of India (ARDSI) was set up in 1992 in Kerala, with the primary objective of providing support to the families of dementia patients, creating awareness about the illness in India and encouraging research. It now has chapters in Cochin, Bombay, Madras and Delhi.