The word is management

The word is management 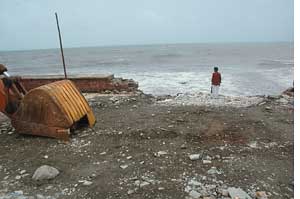 The question is whom to manage and what to regulate

An official of the environment ministry said that the new notification is better because it is site specific. "It ensures planned land use on the coast, protects ecologically sensitive areas and lifestyle of fishing communities. India's coast is diverse--ecologically, in terms of population density, and land use patterns. A law that treats the entire coast as a single entity is certainly weak. crz did exactly that," he said.

The 500 metre no-development zone in crz was arbitrary, he added. "Take the case of Mumbai, where it makes no sense to insist on such a zone. Because of population pressure, the zone gets encroached upon, turns into a slum and adds to the pollution load."

But, criticisms are many for the new notification.

Failure of crz notification is of the ministry's own making, said Pradip Chatterjee of a non-profit in Kolkata. "Over 300 cases of crz violations are yet to be heard in various courts in the country. Rather than strengthening the existing law, the government has introduced a much weaker piece of notification," he said.

Fishing community leaders apprehend cmz will legalize all crz violations. In that case, it will be after taking into account the social aspect, said another ministry official.

"Someone has invested time and money in building a house, even if by flouting the rules; it seems hard to tear down that structure. Perhaps it should be left to the courts to decide on such matters," said the official.

Critical of the ministry's approach, Sudarshan Rodriguez of ATREE (Ashoka Trust for Research in Ecology and Environment) in Bangalore said he had studied the notification and that ATREE, along with the Pune-based Kalpavriksh, had documented the sequence of events that led to the cmz notification (see box Run-up to cmz). "There is no logic behind categorization of areas under the new four coastal management zones. We are sure the rationale of vulnerability while demarcating zones is overridden by economic interests," said Rodriguez.

It does not have any deadline by when identification of the areas should be done, he added. No-development zones have been dropped in cmz, paving the way for large and polluting projects such as ports, airports, mining and power projects, alleged Rodriguez.


In place of no-development zones, there are provisions for setback lines and vulnerability mapping in cmz. The idea behind such concepts is to study India's coastal belt and divide it into various zones depending on various factors. Setback line would be demarcated on the coast based on its vulnerability to sea-level rise and other hazards.

It would replace the 200 m and 500 m no-development zones of the crz notification. These are limits beyond which development activity is regulated or not allowed.

The setback line would ensure that beach erosion does not worsen and protect buildings and investments--housing, roads or plantations--by locating them away from the zone of probable worst-case erosion, a ministry official said.

Non-profits alleged the ministry had further diluted the recommendations.

"Only four parameters--elevation, geomorphology, sea level trends, horizontal shoreline displacement--would be considered... against the seven in the Swaminathan Committee Report," reads the ATREE -Kalpavriksh report. The report also alleged the ministry disregarded three parameters because the quality of data on these was poor and development of a usable database for the prediction of vulnerability would take at least two to three years.

A ministry official said that the ministry was using scientific parameters followed worldwide to draw the setback line. It was planned earlier that work on demarcating the setback line would begin next year but the ministry has started work on it, with help from what it calls scientific experts from the World Bank. Orissa, West Bengal and Gujarat have been chosen for this project.

"The detailed project report is being prepared. We have, on our own, demarcated a setback line for Nellore in Andhra Pradesh, Paradip in Orissa and Dahej in Gujarat. The next phase will cover Mangalore, Navi Mumbai and Nagapattinam," the official said. Details of the setback line projects are not available to the public.

The National Fishworkers' Forum is sceptical of the government's plans. "Even after 17 years, the ministry of environment and forests has not been able to demarcate the high tide line; how will it map the setback line in two years?" questioned the forum's chairperson Harekrishna Debnath.


The worst sufferer as a result of the cmz notification will be the Indian fishing community that is being pushed away from the coast, said N D Koli, general secretary of the National Fishworkers' Forum in Mumbai.

"The intent behind the notification was to secure fisherfolks' traditional rights but it has proposed just the opposite," he said. For instance, the notification states that coastal panchayats with more than 400 persons per sq km shall be declared cmz -II areas. This means many of the earlier crz -III (mostly fishing villages) categories would now become cmz-II.

The notification restricts new settlements in cmz- II areas by allowing them only on the landward side of the setback lines but allows other tourism and recreation facilities on the seaward side of setback lines, said Debnath.

The new notification has also removed no-development zones from cmz- III areas. According to the notification, water sports and recreation activities, agriculture and horticulture, treated effluent discharge facilities, greenfield airports, integrated port, bridges and sea-links, mining and shipbreaking are allowed on the landward side of cmz -III.

"It is not desirable to include mining sites and power plants that would have serious adverse implications for both local communities and valuable marine resources. The list needs to be totally revamped," said E A S Sarma of Forum for Better Visakha, a non-profit in Visakhapatnam.

Koli added that the government was playing it smart by saying that it had not banned fishing activities in cmz areas. "Instead, it has allowed all kinds of polluting projects to come up on the Indian shoreline, which would translate into a polluted sea and no fish; hence no fishing and fisherfolk to deal with."

Activists said implementing the provisions would be far from easy because of lack of clarity on implementing agencies.


Responsibilities have been allocated to varied bodies such as village panchayats, urban local bodies, National and State Coastal Zone Management Authorities, state governments, scientific institutions and the central government itself. But, there is little clarity on how these bodies will execute their allocated tasks. There is no mention of any appellate system for disputes related to decisions taken by these authorities.

The major shift from the crz notification is the inclusion of local authorities. These would be responsible for regulating activities based on the integrated coastal zone management plan (iczmp) for cmz-I areas.

iczmp is defined as the land use plan or development plan prepared for implementation of the integrated coastal zone management. But, monitoring these activities have not been spelt out clearly.

Rodriguez called it a double-edged sword. "Whereas devolution of power seems positive, it makes sense only when an effective implementation and monitoring system is in place. The fact is such a thing is lacking in cmz notification. This may translate into more corruption at the local level," he said.

The draft notification proposes to set up a 32-member National Board for Sustainable Coastal Zone Management chaired by the environment ministry. The board's mandate is to "provide policy advice to the Centre on matters relating to coastal zone management, but shall not undertake regulatory functions". Environmentalists claimed the exact role of the board was not clear.

The draft notification also proposes a National Institute for Sustainable Coastal Zone Management, operational details, powers and functions of which have not been detailed.