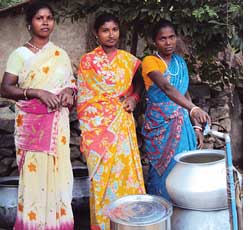 Thirty-something Gulab Kunju remembers the days when she would drink milk to quench thirst because drinking water was scarce. Her village Dhaurada had three hand pumps to meet the needs of more than 120 families settled in four hamlets. Each day she would make several trips to the nearest hand pump on the outskirts of her hamlet.

During summers the water would turn reddish. “It tasted like lime. One could see iron particles settling at the bottom of the vessel,” said Kunju. Another resident Meenakshi Lakda had to throw away some of her vessels because they were encrusted with thick layers of reddish deposit. When the hand pumps would prove insufficient people would drink water from the ponds. Diarrhoea and other gastrointestinal diseases were common. “When our babies fell sick doctors explained to us that their stomachs had been damaged just like the utensils,” said Lakda, 30.

Dhaurada is in Rajgangpur block of Sundergarh district in Orissa.


The sub-humid dry land suffers acute soil erosion. Most people in the village depend on groundwater for drinking. Dhaurada sits on a granite terrain, below which lies the hard layer of dolomite, a magnesium- and calcium-rich sedimentary rock. Hand pumps in the village were drawing water from aquifers in the dolomite belt, but the yield of these aquifers is very low and the water quality poor—it has excess iron and calcium. So when a team of the Rural Water Supply and Sanitation Department visited the village in 2005, the people requested it to fix the problem of drinking water.

The engineers first tried boring deeper but failed to increase the yield of hand pumps because the deeper layers did not have any water. They noticed a few families in the village had private wells, which did not go dry. These wells drew water from the granite layer that yields two times more water than the dolomite layer. The engineers then decided to sink an open well. The department made it clear the well would belong to the community.

The next year Dhaurada residents formed the Village Water and Sanitation Committee. The department estimated the total cost of the well and supply structure at Rs 9.3 lakh, and told the village to bear 10 per cent of it. The committee contributed Rs 50,000 cash and the rest was met through labour. The project was sanctioned under the Swajaldhara scheme, part of the National Rural Drinking Water Programme.

The committee, constituting only farmers, bought the material for the well and kept a record of it. The well was sunk to the depth of the granite layer. Pipes were laid from the well to the houses. Today, 76 per cent of the houses are getting water from the well, said Suraj Bora, committee president. The water is pumped for two hours in the morning and two hours in the evening.

For a year the village has been managing its water supply. The monthly expense comes to Rs 3,200, including the electricity bill and the salaries of an operator and a guard. The committee easily meets it by collecting Rs 30 a month from each family, explained Kanu Charan Patra, the committee secretary.

The water quality is also good. There was no complaint of water-borne disease in the village last summer, say its residents. The well is surrounded by a filtering layer of pebbles for runoff from the road and farms.

To keep the surrounding area clean it was important people stopped defecating in the open. Executive engineer Janmejoy Sethi used the drinking water mission to improve sanitation in the village. Water connection was given to families on the condition they would build toilets. Eighty per cent of the toilet cost was paid through the rural development fund, said Sethi, who is also member secretary of the district water sanitation department. As part of the total sanitation campaign, the department has built 96 toilets in the village.

The committee keeps a strict eye on water wastage by people. During summer it reduces pumping hours. But a few kilometres from Dhaurada, miners continue to pump and throw away water from dolomite mines. Water level in the wells in the area has dipped by a foot (30cm) since 2006, said Sethi. In the absence of groundwater law in Orissa, miners are illegally extracting groundwater, he added. Dhaurada residents are afraid if the wastage continues the village might go back to square one.