RITA ANAND explores how a megacity civilisation of Central American Indians Had survived on natural resource management, and what needs to be done to Salvage the system 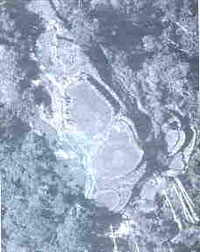 "IF EVER there were to be a paradise in this land of Indians, this" Frary Pedro Simon, a 16th century chronicler, had 1i At a dizzying 5,775 metres (in) above sea level, the fd stiountains in Sierra Nevada, Colombia, make up the rs highest coastline range. just 300 years ago, some " Tayrano Indians lived off these mountains in citystates Isorrounded by lush crop-fields. Today, a mere 2,000 settles bottle erosion, meagre supplies of water and poor soil 6m To eke out a living. Their methods of cultivation are it proc with the environment. Most of them, naturally, have migrated and the native Indians have been completely marginalized.

"The greatest joy for the eyes was the abundance of com, mam potatoes, cassava, guava trees..." wrote Simon. His big statement is backed by 15th century Spanish chroniclers .soch as Fernandez de Ovidedo and CasteUenos, but historians na bad dismissed these as travellers' tales. Castellenos' on"verse was hard to fathom. There aren't any contemporary ir toope which would help locate these city-states.

But in 1975, history came alive. Alvaro Soto-Holguin, a onher finarn the Colombian Institute of Anthropology, dabonat the destruction of an archaeological site by treasure bmoneri6 rushed to investigate. The site was located at the orbaritaca river, near the northern slope of the Massif. tug in their spades and dug out the megacity of oday, excavations and poebas we still going on at 180 sites and have involved Mm and anthropologists, alongside historians and Archeologists.

How did this presently degraded area support 20,000 people? Tayrano, Indians were past masters at resource moon. Holguin's team of investigators wanted to N& century systems, so that they could improve the g1now of the marginalised native Indian groups - Koo warl Sandra. States Holguin, "We wanted to he baboons from further intrusion by settlers and tap mbk* on resource management."

The Massif is shaped like a 3-faced pyramid. Climate, rainfall vary at different altitudes. Up to a height of onst veIpmation thrives, giving way above that to dry operforests At 1,000 m, there are the damp tropical d1b m annual rainfall of 2-4,000 mm. Rivers and not through deep, narrow ravines. At 3,000 in the onon, bmw to damp rainforests, has an average rain = sum Higher still, at 4,700 in, come the snowy dlVwft vegetation.

Vegetation surveys and soil profiles, pbysico-cheinical tests, ono6ogs and geological data were examined. Delayering, a technique involving horizontal excavation, so that the entire landscape can be visualised at a glance, was carried out.

The sites examined were from sea level, up to 1,800 in. Theywerelocated near the Upper and Lower Buritaca river on the northern slope of the Massif, and the Nulicuandecue river near the southern slope. Chronologically there was little difference between the cultural remnants, and this implied concurrent development. "We conclude that the people who settled here had developed this technology elsewhere," explains Sotto.

Six sites examined near the lowlands contained sea species, resources from mangroves and the cultivation of cassava. The site of Tigres, at an altitude of 1,440 in, and Alto de Miro, at 1,530 in, yielded diverse crops and soils. An ancient road joined all these sites to the megacity of Ciudad Perdida.

That megacity rests on a ridge and extends to some hillsides and plateaus. On the west, the Buritaca river cascades down into a torrential waterfall. The site covers an area of 20 hectares (ha), but the remnants are scattered over an area of 150 ha. Protruding terraces, toppled walls, lithic and metal tools lie all around. Stone was used extensively to build roads, pillars and terraces, and a quarry was also unearthed.

Since the terrain was extremely uneven, the ancient builders had to carve out horizontal spaces for building homes. They did this by building terraces of various shapes and sizes, from 20 in to 1,600 in. Right from the highest point of the city, stepped terraces blended into the landscape following the line of the mountain slope along a 1,280-metre stretch.

Begin walking from the city's highest point, with the Buritaca river flowing on the west. Ciudad Perdida's main road begins from here and runs parallel to these terraces. Sometimes this lifeline turns into a stepped path leading into homes and courtyards. As it meanders downwards, the main road branches off into smaller paths, which lead into the city centre situated on the ridge. This main road finally descends to the lowest level of the settlement, where there is a slate@floor slab. One hundred metres from this point the road emerges once again and continues downward along an ornate stone stairway.

Look down 700 in below: the Buritaca river rushes past. Continue walking and end up at the site of Alto De Miro. All the sites were linked to Ciudad Perdida's main road, making transport and communication much easier.

Retention walls once consolidated the terraces and reinforced the roads and helped regulate the course of rainfall. Land cuts and landfills were sometimes over 6 in high and needed a wall to lean on. These walls once rose to a height of 30 in and were topped with rectangular slabs to protect them from rain. Wall foundations were made of rock laid on firm ground, set in place, surprisingly, without any mortar.

"Aromatic logs were kept perpetually burning in the huts of the chiefs and in other huts,where they kept their jewels, feathers and blankets," writes Simon. Indians lived in circular WWI, huts, called buhios, built with wooden posts, mud walls and cone shaped thatch or palmleafed roofs. Buhios were built on ringhaped foundations. These foundations were raised 30 to 80 cm from the floor level and covered with stone slabs. On the outer side of these ring foundations, a drainage or ditch collected rainwater and directed it towards the stepway or road. This in turn helped rainwater flow down the slope, thus avoiding erosion.

Overall population density was high in the entire area but population estimates in each Tayrona site was low. Available land and resources of those times could have sustained many more people. But the Tayrano Indians did not want to overburden their urban areas. "Therefore, Ciudad Perdida was probably a settlement model designed for a certain number of inhabitants. Once population spilled over this limit, another settlement was built to accommodate them," says This also explains the proliferation of sites.

Each settlement specialised in a particular crop, on sod conditions. Coastline populations with easy the sea obtained salt and protein from it. People at tudes cultivated cotton and cassava, and those at In tudes grew corn, beans and harvested fruit trees. Tayranos could maintain a high population density their sustained management of natural resources.


"Fifteen chiefs are great lords, subject to the mandates of the Naoma and each with his own people under his rule," Castellanos. In all the city states there was a clear divisiom labour. For instance, in Alto de Mim certain areas are iq dated with artefacts related to religious ceremonies, indicat that the people associated with it lived here. Some city were more important than others. This is apparent from an examination of the different types of architel and construction.

Archaeologists have not concluded when the civilisation died out. The Tayranos were conquered by the Spanish the 16th century, but this conflict went on for about 100 years. During this period, the population of the India dwindled. Their economics base was ruined when the the roads and stepped path were destroyed, because this made communication between mutually dependent settlements extremely difficult. Diseases from the Old World devastated them. The Indians who surviveded trauma vanished,the northern slope, conquered at the price of so mean bloodshed was never colonised.

After the Spanish conquest, the patt settlement restricted the Indians to theirl lands. Previously, their lands had given access to the sea, along with a constant fish and salt. But the intrusion of setth catalysed their migration to higher alting and to a reliance on hunting animals is too low to meet the demands of even a population.