To store and to have not

To store and to have not 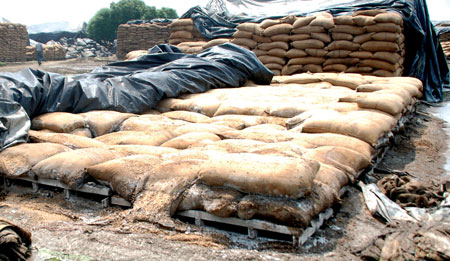 Since May the media has been beaming images of foodgrain rotting in various parts of the country. FCI’s investigation revealed that grain costing nearly Rs 50 lakh was damaged at Harduaganj, Orai and Hapur in Uttar Pradesh. “We have to procure all the grain that farmers bring to us if it meets the criteria. There is no limit to how much we can procure. In the past three years, because of good minimum support price, procurement has been massive,” said an FCI official.

In July, FCI had a stock of 60.8 million tonnes (MT) against a buffer requirement of 24.3 MT. As per the central food procuring agency’s projection, the stock by March 2011 would be 47.8 MT against a buffer requirement of 21.2 MT to meet emergencies. The storage capacity till July was 30.6 MT; this included warehouses owned both by FCI and private parties, combined with grain under a plastic sheet.

According to Union agriculture minister Sharad Pawar’s statement in the Rajya Sabha on August 10, FCI had a damaged stock of 11,708 tonnes of food grain in July 2010. State agencies of Punjab and Haryana that store grains for FCI had a non-issuable (damaged) stock of 55,834 tonnes of wheat till July. According to Pawar, the wastage of foodgrains has reduced over the years (see: ‘Wastage in the past decade’). 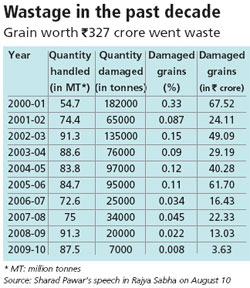 “The problem arose only after the government’s stress on privatisation of storage facilities. There has been no significant addition to FCI’s own capacity over the past so many years, but there have been many incentives to attract private investors of godowns,” said an FCI official requesting anonymity. FCI’s own covered storage capacity has remained stagnant at about 12.9 MT since March 2005 while its hired capacity has varied between 8.6 MT and 14.4 MT.

Since procurement of kharif crop is to begin soon, storing the newly procured grain will be a challenge. The government has decided to create an additional capacity of 15 MT through a public- private partnership—the government will guarantee hiring godowns from private entrepreneurs for a minimum of 10 years. The scheme was introduced in 2005 with a guarantee period of five years which was increased to seven years in the last budget and finally up to 10 years.

In its advertisement to attract investors, those without any experience have also been lured with tax incentives. “Three years ago, when godowns lay empty, the Comptroller and Auditor General of India told us to de-hire them. And now the stocks are so abundant that we need those godowns again. But they are not free,” an FCI official said.

“FCI systematically dismantled its own storage infrastructure by returning 17 MT of storage space between 2006 and 2009. This is a classic example of poor planning,” said Biraj Patnaik, principal adviser to the Supreme Court commissioners in the Right to Food case. Instead of planning for peak procurement, they estimated future storage need based on the lowest level of procurement, he added.

That apart, there is the problem with storage technology. Following tradition, FCI stores grain mainly in jute sacks; but this causes problems as the gunny sacks are easily damaged by rodents. According to an official of the Central Warehousing Corporation (CWC), FCI has spent Rs 990 crore on gunny bags in the past 10 years.

“When the godown concept was introduced in the 1960s, vested interest appeared quickly because pilferage is easier with gunny bags. One can always say rats ate up the grain or fungus destroyed it,” said Suman Sahai, convenor of the non-profit Gene Campaign. With silos, which are being used in many countries for a long time now, monitoring the grain is easier.

A grain silo is a concrete or metal structure where grain is stored loose and not in bags. Grain is poured from the top by a conveyor belt and taken out from an outlet at the bottom. A system of first-in-first-out is maintained even as the grain is protected against rodents and humidity. “Jharkhand has been using gola, containers made of galvanized iron, for storing almost anything for a long time,” said Sahai.

K V Thomas, minister of state for agriculture, along with officials from FCI and CWC, visited China in June to study the country’s food storage technology. “The lesson from China is that we should go for bulk handling of grain (in silos),” said the CWC official. FCI did build a concrete silo in Mayapuri in Delhi in the late 1960s. There are silos in Uttar Pradesh, West Bengal and Tamil Nadu as well. “Grains were brought in bags, cut open manually and stored in the silos; they were again packed manually in gunny bags and despatched. Mass-scale handling was still in bags. It was both costly and cumbersome,” said an FCI official. The Delhi silo has been lying unused for three years now.

“FCI has invited us to take over the silo,” said S P S Shishodia, consultant with Adani Agri Logistics, in Gurgaon in Haryana. The company built more efficient silos with a capacity of 550,000 tonnes in 2006 at a cost of Rs 650 crore.

Besides the two main silos in the procuring states of Punjab (at Moga) and Haryana (at Kaithal) that have a capacity of 200,000 tonnes each, there are smaller silos at Navi Mumbai, Coimbatore, Hooghly, Chennai and Bengaluru. “Minimal manual work is required in our silos. At our main silos only 25 people handle the entire operation, which is totally mechanical,” said Shishodia. The company’s silo at Moga has a weighing bridge where simultaneously the grain is tested for quality. The tractor or trolley is then taken to a hydraulic tilting platform to which it is fixed and the grain is poured into pits. After mechanical cleaning, the grain is put in the main silos where it is fumigated with phosphine.

FCI awarded a build-own-andoperate contract to Adani for 20 years after a policy on bulk handling, storage and transportation of foodgrains was framed in 2000. The government pays for a minimum guaranteed tonnage at Rs 2,000 per tonne every year to cover capital cost. Plus, the company charges Rs 500 for each additional tonne.

The high capital cost of silos has slowed down its adaptation. “It is not just about the main structure, but the entire chain,” said I C Chaddha of CWC. The Adani silos have their own specially designed rail wagons that transport loose grain, he said. “But it has to be put in bags when transported in Indian Rail wagons. Creating this infrastructure is expensive,” Chaddha added. According to him, the cost of bag storage is about Rs 2,000 per tonne excluding the cost of land, which is same as silo storage cost.

“The cost of silos should not be a consideration at all because food security is not an economic issue but a social one,” said Sahai.

Right to Food activists feel the solution is not silos, but decentralised procurement and storage. “Large silos in the procuring states are not what we need. We need godowns at block and panchayat levels. At least three months’ supply should be available in the blocks at any time,” Patnaik said. “When we can build world-class airports in Delhi, can’t we create storage infrastructure?”