Can this tribal community in the Nilgiris survive the concrete trappings of civilisation? Tarun Chhabra on the eco-friendly Todas 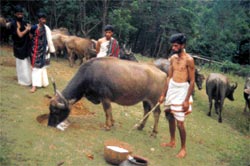 The God Aihn rules over Amunawdr, the realm of the dead. He is a dairyman and created the Todas and their buffaloes. To qualify for entry into the afterworld, the Todas of the Nilgiris must follow all prescribed ceremonies.

This belief is the pivot of Toda culture. An ancient tribal community of the upper Nilgiri plateau, the Todas have their own rules to understand the ultimate nature and purpose of life.

This single belief ensures that each sacred ritual, be it pregnancy or paternity, uses specific flowers or leaves, drawn from more than 100 specific plant species. The God will not settle for substitutes, and the Todas have complied. This is how they have inadvertently helped to preserve their environment.

However, these floral species are on the edge of extinction, just like their rituals and the Todas themselves. Toda population is down to 1400, scattered in about 50 hamlets. Their way of life is in danger of being corrupted by all trappings of civilisation.

More than 180 years ago, ever since the Nilgiri hills, were opened to civilisation, the Todas have fascinated anthropologists with their colourfully embroidered pootkuly cloaks, curious barrel vaulted temples and houses, unique dairy temple rituals and ferocious looking buffaloes with upward curving horns (a breed called Bubalus bubalis).

But, thankfully, the British, perhaps understanding the Todas' close relationship with nature, did not relocate them. Other outsiders were not quite sensitive. Today, the Nilgiri hills are laid out with townships of concrete, tea gardens and hydel reservoirs.
The Toda culture revolves around their cattle herds and the dairy temples. Each of the six grades of temple dairies has its cattle herd of sacred buffaloes and an exclusive array of varied rituals.

Only a Toda who undergoes elaborate ordination ceremonies can qualify as a priest and then milk the herd of sacred buffaloes, belonging to that temple grade, to ritually process it into butter, buttermilk, curd and ghee.

Each tiny hamlet with a temple mandates the use of several streams: a domestic stream; an ordination stream where priests undergo ordination ceremonies; and a dairy temple stream where the priest collects water for cooking the sacred food.

Another way culture led to better management of nature is the Todas' belief mandating the use of specified forest produce to construct their barrel vaulted and conical temples. They use natural materials like kwehtf or paarsh (Sideroxylon sp.); tree poles; specified wooden planks; rattan cane (Calamus pseudotenuis); theff or bamboo reeds (Pseudoxytenanthera monadelpha); a swamp grass called avful and specified wood for the door and carved kweghaishveil, a totem atop the thatch.

If any of these species gets depleted, Toda culture would be at a crossroads as they do not use substitutes. More frightening, if any species become locally extinct, their culture could collapse.
Today, Toda ecology faces an invasion. Exotic tree plantations have come up in abandoned Ti dairy sites -- once the most sacred grade of temple dairies, the sacred hills are extensively quarried for stone, sacred migratory routes are blocked by reservoirs and tea or tree plantations. Sacred objects and bells from temples have started to disappear.

Thin bamboo reeds called theff by the Todas, are bent together in bunches of five sticks, while still green, to give their houses the typical barrel vaulted shape. These are fastened with peeled rattan cane. We found that both these species are difficult to gather today.

This bamboo reed, provisionally identified as Pseudoxytenanthera monadelpha and seen in many shola pockets of the Nilgiris, is now restricted to some dense jungles on the southwest slopes. Todas have to go long distances for this bamboo reed.

Similarly, rattan cane, plentiful on the Nilgiri slopes and some sholas, has virtually disappeared. Today, these areas are decimated as the cane is extracted for commercial use. Todas go into the dense rain forests on the slopes beyond the western catchment and Mukurti areas to gather rattan cane.

Even avful grass used to thatch Toda houses and temples and common in swamps in the main Toda heartland of the wenlock downs, has nearly disappeared. It can only be found in reasonable quantity around some large swamps in the western plateau of Korakundah. Even here, another species predominates. What are the reasons for the disappearance of this avful grass?

A recent study we initiated indicates that ever since the Todas were not allowed to set fire to these swamps (one way of Toda management) during the dry winter months, other grass species started to dominate Mass planting of exotic trees like eucalyptus on adjacent hillsides also led to its disappearance.

No wonder then that their temples disappeared and traditional houses gave way to cement ones. These concrete houses are cold, damp and often leaking. Traditional houses in comparison are incredibly warm even during the most frosty winter nights. Moreover, despite having no foundation, they can withstand the most fierce cyclonic storm as they are designed to act as natural wind breakers.

Conical temples too, are marvels of tribal architecture and even in areas where annual precipitation crosses 3000mm, they can last for upto 80 years, with only periodic re-thatching.


Toda's quaint barrel vaulted houses, which symbolise the Nilgiris, are today hard to spot. These images have been dry transfered on T-shirts and other products as logos.

Seven years ago, there were just a couple of traditional houses remaining in the permanent hamlets. One day, a Toda wanted to build a traditional house for his ailing father. The administration agreed to provide the funds. Quite soon, it was ready and one Sunday morning, the Collector, additional Collector and the Superintendent of police inaugurated the house. The construction was so impressive that advances were paid on the spot for two more houses. Nine houses came up that year. Today, over 35 traditional houses have been constructed.

For anthropologists, this is nothing short of a miracle as barrel vaulted houses were being sadly accepted, as marvels of bygone days. The Toda landscape looks authentic today. Todas hope that the rest will fall into place.

The writer is a practising dentist and an expert on Toda ethno-botany and the Nilgiris. He also formed the Toda Nalavaaz Sangam, a charitable organisation aimed at helping the Todas.