Will the National Alliance of People's Movements be a whiff of Fresh air blowing in winds of change, reforming the way the country views development? 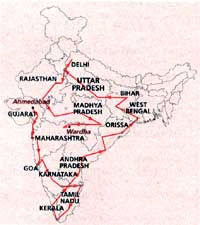 THE hall was packed to its capacity, as environmental activist Medha Patkar spoke to students from Delhi University on the idea behind the National Alliance of People's Movements (NAPM)'. " Vikas kya hai, agar humko tai karna hai, to akendrit kijiye (If we are to delcide what development is, we need to decentralise). Give power to the people," she exhorted. Her statement succinctly summed up the philosophy inspiring the NApm, a conglomeration of like-minded mass-based organisations which have joined hands to strive for a common goal.

On February 22, a group of about 25 NAPm activists from all over the country stopped over in Delhi for three days before continuing -their yatra (travelling campaign). The yatris had set out from Ahmedabad on January 30 and will conclude their march at Wardha, Maharashtra, on March 13 (Down To Earth, Vol 4, No 19). The activists have already visited I I states and will traverse another five, meeting local organisations and holding public meetings.

Throughout the country - whether in the Narmada valley, in Bastar's forests or in coastal areas - people have long been struggling to assert their rights over their lands -and natural resources. But these efforts have been isolated and have often lost out to powerful lobbies. Said Patkar, "The government is talking about how liberalisation and the New Economic Policy (NEP)Will benefit us. But the truth lies in the people's feelings and anguished voices." The NAPm seeks to rally these voices and put forward an alternative development model to render the people more powerful.

"The problems of displacement and loss of natural resources are just the symptoms. The disease is the (NEP) and we have to fight it," pointed out Ram Dhiraj, convenor, Azadi Bachao Andolan, a member organisation of NAPM. "The yatra is all about chalking out new ways to fight the disease," revealed Dhiraj. Patkar also raised her voice against the government's skewed priorities. Referring to the indefinite hunger strike in Delhi by adivasis agitating for the implementation of the Bhuria Committee Report, she said, "Tribals have to go on a fast to get a law that already exists implemented. But export-import policies are changed and passed readily."

Such an attitude could not go unchallenged, resolved the participants. "We have to create a policy that puts people above Pepsi," declared Thomas Kocherry, president, National Fish- workers' Forum. And he is confident that tangible results shall emerge by effectively channelising people's power. "The P Murari Committee's unanimous recommendation to cancel all the licences issued jointly, to Indian and foreign fishing companies for deep see fishing is a perfect example," said Kocherry.

But some amongst the yatris conjured up a rather impractical and naive picture of what they called an alternative. While Dhiraj swore by "a simple and self-contained life", Nafisa of Yuva Gram, Jhabua, Madhya Pradesh, gave a call to "form small cooperatives, kick out large banks and force multi-national corporations to close shop in the country", Most yatris, however, admit that they are still in search of an alternative model of development.

The blueprint for this model will perhaps crystallise at Wardha where the yatra shall conclude with an expected 300-400 activists congregating from all over the country at a national convention. The future course of action will hinge on the outcome of their meet. "The alliance may lead to a national democratic alternative," says M P Mathai, convenor, Pooyamkutty Campaign. While an alliance with any political party is ruled out, the NAPm sees itself playing the role of a pressure group influencing electoral candidates.

All has not been smooth for the NAPM, as a misunderstanding is reported to have taken place amongst the participants. A scheduled visit to Alwar, Rajasthan, with a prominent local NGO, Tarun Bharat Sangha (TBS) had been cancelled as the TBs has been allegedly receiving foreign funds, an allegation which Shantiswarup Data, a TBS trustee, denies. The organisers tried to hush up the matter. "We do not discriminate against foreign-funded organisations," clarified Vimal of Himalaya Bachao Andolan. "This was just a logistical problem." For the sake of the good that would accrue to the people, one hopes the organisers are able to prevent the movement from being affected by internal fissures.