How a popular tourist destination in Sikkim became the first village in India to ban bottled water and manage the trash left behind by tourists, explores Sayantan Bera 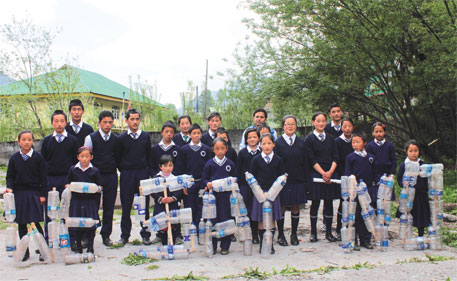 Lachen is a small picturesque village in northern Sikkim inhabited by the Lachenpa community and occasionally visited by the elusive red panda. Placed in the lap of the Himalayas, the village literally means “the big pass”. Of late, it has become a popular tourist destination.

I arrived at Lachen after a bumpy six hour ride from the state capital of Gangtok. The roads were treacherous but lush hills and sudden springs made up for the dizziness of travel. About four in the evening I passed Chungthang, the last big town before ascending towards Lachen. With the construction of the Teesta III hydroelectric project in full swing, Chungthang was an eyesore—a gigantic wall put brakes on the meandering Teesta river. The dam under construction was severely damaged during the 2011 earthquake and Chungth ang town was among the worst affected.

By the time I reached Lachen it was pitch dark. “There has been no electricity for the past one week due to a gale storm,” said my host, 30-year-old Chwang Lachenpa. The mobile network is not available at an elevation of over 2,750 metres, and connection to the outside world is as fragile as the young mountains. The December chill, at -10°C, hit me in the face as I stepped out of the car. Chwang’s house had all the warmth I needed—a neat fireplace that doubled up as an oven with a large pot of water on it. The tea, served in ceramic mugs with a cap, was hot and salty.

Chwang works as a temporary staff with the health department, but he is passionate about Lachen Tourism Development Committee (LTDC)—a group of 32 young Lachenpas who got together in 2006 “to do something for their village”. 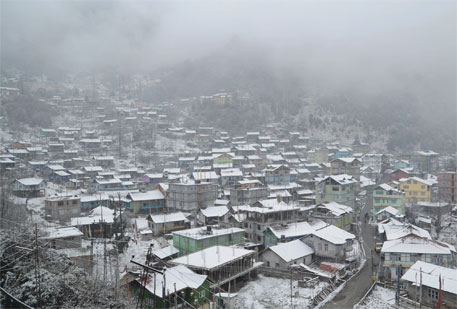 Chwang and his friends started with promoting cultural tourism—organising traditional dance and food shows for tourists. Lachen is an overnight stopover for nearly 15,000 tourists who visit Gurudongmar Lake every year. The biggest glacial wetland in Sikkim and one of the highest lakes in the world at an altitude of 5,183 m, Gurudongmar is considered sacred both by the Hindus and the Buddhists. Lachen, a village of 300 households with 30 hotels and a few homestays, is also a stopover for trekkers on their way to the Chopta valley and Khangchendzonga base camp.

As the number of tourists increased over the years, so did the pile of garbage at Gurudongmar lakeside and Lachen village—milk tetrapacks, water bottles and chips and biscuit wrappers. Every year at the end of the tourist season LTDC organised clean-up drives. Initially, they collected the non-biodegradable trash and burnt it, unaware that their passion was spreading pollution via toxic fumes.

In 2010 the youths were introduced to the concept of zero-waste by the Zero Waste Himalaya Group, a coalition of non-profits which believes in segregating waste at source and recycling it, rather than depending on a landfill. 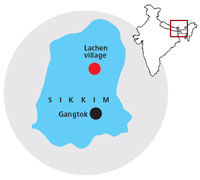 "Soon after, LTDC was segregating the waste, packing and sending it to a waste dealer in Chungthang. “Tackling mineral water bottles was most problematic. They were everywhere—beside the lake, choking streams and drainage channels in the village, and floating down the Teesta. A yearly cleanup drive was not enough,” says Chwang, also the secretary of LTDC.

It was then that the young Lachenpas decided to do away with mineral water bottles altogether. They contemplated a ban but the final word had to come from the dzumsa. This traditional governing body of the village, which comprises elected representatives and is chaired by two heads, pipons, governs all aspects of village life. In Lachen, the word of the dzumsa is like that of god. Even after the panchayati raj system was introduced in Sikkim, there is no panchayat in Lachen and it continues to be governed by the dzumsa, literally “the gathering place”. Unlike panchayats, the dzumsa has revenue collection powers and can impose taxes and fines.

“Initially, the pipons were hesitant. They thought a ban on bottled water would hamper tourism and the income it generates,” says Chwang. But the youth persisted and asked: “Why would anyone want bottled water when they can get spring water right from the Himalayas?” Finally, when two young pipons took the charge in 2012, they concurred with LTDC. On February 2, 2012, on the World Wetlands Day, a ban was imposed on mineral water bottles in Lachen and Gurudongmar—hotels and shops were asked not to stock or sell bottled water; tour agents from Gangtok were told that tourists cannot bring packaged water to Lachen; and a hefty fine of Rs.5,000 was imposed on violators.

LTDC and the Lachen dzumsa did not stop at the ban. They installed water filters at all shops and hotels, water sources were regularly inspected for potability at the state-owned laboratory in Gangtok. The non-profit WWF’s Khangchendzonga Landscape Programme pitched in and offered 45 water purifiers, banners and stickers. Together with LTDC, it organised awareness drives among schoolchildren, shopkeepers and hoteliers to enforce the ban. 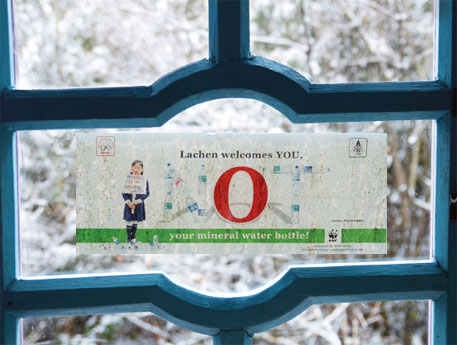 On the morning of December 19, after a good night’s sleep, I opened the door of my hotel room. The entire village, covered in a thin film of snow, looked like a monochrome painting. It was the first snow of the season. At the restaurant of the hotel I saw stickers pasted on the glass panes. “Lachen welcomes you, not your mineral water bottle,” read a sticker. On the next pane were pasted the test results from the state water quality testing laboratory. The spring water is fit for consumption, even without filtering, the results showed.

More than a year after the ban was imposed there is overwhelming support from the local community, including shopkeepers and hotel owners. But the dzumsa did not have to impose fine even in a single instance. Gyatso Lachenpa, secretary of the hotel association, says, “Tourists have complied with the ban and are happy to drink fresh spring water. Sometimes travel agents in Gangtok do not brief them. If by mistake anyone enters the village with a bottle we make sure they take it back with them.”

Kalzan Lachenpa, a woman in her mid-30s and owner of a grocery store, used to sell two crates of bottled water daily before the ban was imposed. For 24 bottles she would make a handsome profit of Rs.240 per day. Still, Kalzan would not like the ban revoked. “All of us are together in this. The money is nothing compared to the freedom from litter and choked drains,” she says. 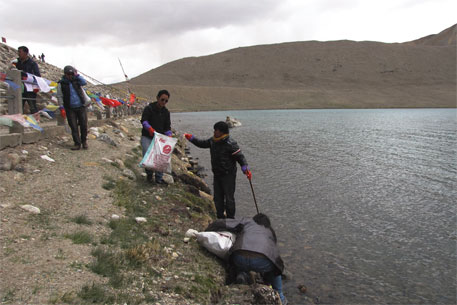 Chwang and his friends have now moved towards zero waste. They are developing a resource recovery centre, supported by the Rural Management and Development Department (RMDD), where all non-biodegradable waste collected from households will be segregated and packed off to the waste trader in Chungthang. RMDD is providing them mechanised shredder for the waste that cannot be recycled, such as multilayered tetrapacks and chips packets. The youths plan to use the shredded packets as fillings in cushions, and knitting tetrapacks into bags and garbage bins.

“What a bunch of enthusiastic youths has done in a remote corner of Sikkim is for the whole country to emulate,” says Yishey D Yongda, joint secretary at RMDD. Last year, the state department won the Prime Minister’s award for excellence in public administration. "We hope other tourist destinations will impose similar bans. Sikkim can be a state free of bottled water one day.”

But how plausible is a ban on bottled water for a place like Tsomgo Lake, which receives a phenomenal 300,000 tourists every year? Priyadarshinee Shrestha, Gangtok coordinator at WWF, says, “The lake conservation committee has distributed water filters at Tsomgo. It is also formulating a plan for the supply of clean drinking water. Whether a ban can be imposed will depend on the commitment of the locals.” I remember Chwang telling me that Lachung, another tourist destination near Lachen, was also contemplating a ban. But enforcing a ban will be difficult in villages without the traditional dzumsa system of local governance, he had said.

Like Lachen, which became the first village in the country to ban bottled water, the state has many firsts to its credit. Sikkim is India’s first polybagfree state. By 2015, it aims to become fully organic by growing its food without chemical fertilisers or pesticides.

Not for nothing, that Sikkim beat Victoria Falls in Zimbabwe and Horuriku in Japan to be listed as the top travel destination in 2014 by Lonely Planet, a travel guide book. “Sikkim has set new benchmarks for responsible travel in the country. Checkbox sightseeing has rapidly made way for sustainable community-based tourism in less developed areas, while eco-friendly policies have lent new vigour to the virginal Himalayan wilderness that drapes the region’s mountains,” reads the Lonely Planet travel advisory. Is the rest of India listening?