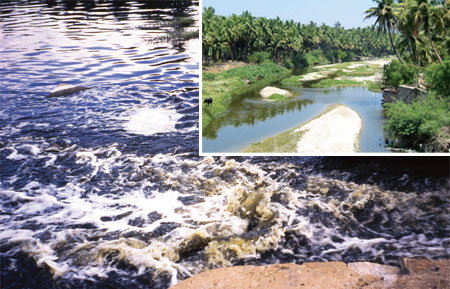 There was a time when people living along the Noyyal river in Tamil Nadu would freshen up by swimming in the river. Now goatherds chase their flock away if they go near the river. The reason is the river water has turned toxic. The dyes and salts from the industrial units of Tirupur, a textile hub, are dumped in the Noyyal. The pollution has affected farming too. There are few signs of cultivation in the fields as the river passes through Tirupur and Karur districts.

“Our children develop skin problems, livestock die after drinking the water and young men don’t get brides because there is no drinking water source nearby,” says A P Kandaswamy, president of the Noyyal River Ayacutdars Protection Association.

The farmers’ association has been fighting a legal battle against Tirupur’s dyeing and bleaching units since 2003. It won a major battle in February 2011 when the Madras High Court ordered that the 700-odd dyeing units in Tirupur be shut down. The order was given on a contempt petition moved by the farmers’ association, which pointed out that the industry and the state government were not complying with the court’s 2006 order to ensure zero liquid discharge (ZLD, meaning no liquid effluent is released in the open). On March 25, the court dismissed the factory owners’ plea that they should be given more time to implement the order.

The closure of the dyeing units has not reduced pollution significantly. The total dissolved solids (TDS) in the river has decreased from 5,000 mg/l to 3,000 mg/l since the closure, but this is not enough, says Kandaswamy, waving the latest data from the public works department which monitors the Noyyal. 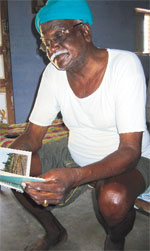 Pollution norms specify a TDS limit of 250 mg/l. A dyeing unit owner says the pollution is being caused by other dyeing unit clusters not covered by the court case, and by illegal units.

In Tirupur, attempts to implement ZLD began in 2010 when existing treatment plants were upgraded and new ones set up. At present, there are 20 common effluent treatment plants (CETPs). To achieve ZLD, secondary treated waste is passed through membrane filters. The filter-reject, or reverse osmosis (RO) reject, is evaporated so that no pollutants are discharged in the open. The factory owners say there is a glitch. The evaporators in the CETPS are not efficient and cannot deal with the quality of effluent supplied (see ‘Inefficient evaporators’ on opposite page). For this reason, dyers claim, they had to cut production to comply with the court’s order on ZLD.

But the farmers’ association scoffs at the claims of the industrial units that they have stopped dumping effluents into the river. The colour of the water indicates continuing pollution, they say.

The industrial shut down has, meanwhile, assumed political colour. It was an important campaign issue in the just concluded assembly elections. The leading opposition party, AIADMK, claimed during its stint in the government from 2001 to 2006, it had plans to take Tirupur’s effluents to Tuticorin through a pipeline and discharge it into the sea—water quality suitable for marine discharge has the lowest wastewater standard. The plan was nixed by the DMK party when it came to power in 2006, says AIADMK.

The concept of ZLD emerged because the industry has repeatedly failed to meet the pollution discharge norms set by the Central and state pollution control boards (CPCB and SPCBs), says S Eswamoorthi of private firm ECP Consulting, in a paper on the subject. Till recently, SPCBs either issued show cause notices or penalised polluting units. “There has been a realisation that the present monitoring mechanism has failed to check the incessant discharge of wastewater,” says D D Basu, in-charge of pollution, assessment, monitoring and survey in CPCB.

ZLD pushes up cost 30 per cent

In the case of Tirupur, the high court played a crucial role in mandating ZLD. But factory owners say implementing ZLD has increased costs 25 to 30 per cent. “Consumers must be willing to pay the extra cost. Everyone wants cheap, good garments and at the same time they accuse us of destroying the environment,” says a dyeing unit owner.

The capital cost of setting up a plant works out to Rs 100 per litre of effluent treated. “We had to take bank loans for this; many of us sold our wives’ jewellery. Now we have to shut down. How will we pay off the loans?” asks a dyeing unit owner.

CPCB has an established criterion that polluting industries must spend three to 10 per cent of their turnover on wastewater treatment. Tirupur factory owners say they have to spend more. “The government must subsidise the treatment if industry and livelihoods are at stake,” says R C Trivedi, former deputy director of CPCB. Tirupur industry owners say the Central and state governments have promised them Rs 320 crore for upgrading the CETPs but the release of money has been delayed because of assembly elections. 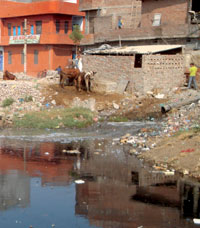 Since dyeing constitutes one-fourth of the total production cost, garment exporters say they find it cheaper to send material to be dyed to Ludhiana and Surat even after including transport costs. Tirupur textile hub, as a whole, employs some 400,000 people directly and another 200,000 indirectly. With the dyeing units closed, an estimated 200,000 people are out of work. Dyeing unit owners say even if the factories are reopened they would find it tough to get people back.

After the shut down, the industry is considering shifting the dyeing units to the SIPCOT industrial estate in Cuddalore on the Tamil Nadu coast. The inducement is the option of discharging effluents into the ocean. In January, the state government commissioned the National Environmental Engineering Research Institute (NEERI) and the National Institute of Oceanography at Goa to conduct a feasibility study.

Shweta Narayan who works with the SIPCOT Area Community Environmental Monitors, a citizens group that tracks pollution in the industrial estate, says coastal communities of Cuddalore and Puducherry will oppose the proposal as will people whose land will be acquired for installing the pipeline for carrying effluents to the sea.

Scientists say ZLD can be implemented in Tirupur if the industry gets down to it. A technology developed by S R Ramaswamy, a US-based chemical engineer, can make effluent treatment cost-effective at six to seven paise per litre after factoring in the recovered water and salts; the operational cost of one of the existing CETPs is 25-30 paise/l. His company, Neelkantaa Pollution Preventers, claims its technology can recover more water, salts and dyes, and it does not use RO.

The Madras High Court mandated ZLD for the Tirupur factories because the Noyyal is a seasonal river and there is no possibility of treated effluents being diluted by freshwater. The story is the same in Ludhiana, another textile city and a pollution hot spot.

Till three decades ago, visitors entering Ludhiana freshened themselves on the banks of the Budha nullah, a freshwater stream, traversing a 40 km course through rural and urban Ludhiana. Today, the stream has been reduced to a receptacle for garbage, untreated sewage and industrial effluents. In the case of Budha nullah, too, the state high court was instrumental in mandating ZLD.

A committee set up following a public interest petition in the Punjab and Haryana High Court recommended in 2007 that units discharging effluents in excess of 500 kilolitres a day must implement ZLD; the panel recommended a feasibility study. NEERI studied the drain and said ZLD should be implemented because there was no freshwater in the stream to dilute the treated water.

The Punjab SPCB decided to tackle electroplating units first. Their effluent discharge includes heavy metals like zinc, nickel and chrome. There was pressure from the media because the nullah which discharges 500 million litres of wastewater into the Sutlej each day was affecting people downstream. The SPCB stipulated that the eight large electroplating factories must ensure zero discharge.

For the smaller units, the authorities installed a CETP and engaged a private firm, JBR Technologies, to operate it. The company collects effluents from the units and charges them 63 paise/l for transportation and treatment. Rajinder Singh who heads JBR says the company recovers 85 per cent of the water after filtration. The water is being supplied via pipeline to a dyeing factory nearby for reuse. The RO reject is evaporated and the remaining solid waste is sent to a hazardous waste treatment facility.

Singh says the quantity of wastewater received and billed by the treatment plant has increased from 1.3 million litres in January 2008 to over 4 million litres last month. The ZLD facility for the electroplating units has started showing results (see table ‘Budha nullah less toxic’).

The dyeing units of Ludhiana, however, continue to discharge effluents into the Budha nullah. Lift a camera to capture the untreated waste discharge, and pumps get switched off in a jiffy. The Punjab SPCB is adamant that it is being vigilant. It says two CETPs are being set up for the dyeing units which would reduce pollution in the nullah substantially.

Achieving ZLD is more difficult in the case of dyeing units. Metal finishing wastes are not too difficult to treat because they are usually amenable to processes like flocculation and coagulation to separate waste from water, says David Johnstone, a wastewater treatment expert and a guest faculty at Oxford University. “It is easy to have zero or low pollutant discharge but not zero liquid discharge unless (the water is) transported elsewhere,” he adds.

They have, instead, set a stringent standard for the two planned CETPs—the biological oxygen demand (BOD) of the treated water should be 10 mg/l (the CPCB standard for treatment is less stringent at 30 mg/l). BOD is an effective indicator of organic water quality and Johnstone says a BOD of 10 mg/l is “serious (high) effluent quality for industrial wastewater”.

Tirupur dyeing unit owners are miffed by the fact that the dyeing units in Ludhiana and other parts of the country do not have to follow ZLD norms. Evaporation of RO reject is very costly. “That is why ZLD at Tirupur was a big mistake,” says Basu of CPCB.

In Tirupur, the industry uses more sodium chloride (common salt), which is more difficult to treat. Ludhiana produces mostly woolen garments, which are easier to colour and, therefore, use limited quantities of sodium chloride; the coagulant ferrous sulphate can treat this wastewater, says Basu.

Tirupur dyeing units also have to pay a high price for water. They have to pay at the rate of Rs 50 per kilolitre. In Ludhiana, the industrial units only pay a cess of 20 paise per kilolitre of groundwater extracted.

Given the economic advantages that Ludhiana has, it is now feared that the shut industries in Tirupur will put pressure on the dyeing units of Ludhiana. There is no official confirmation of dyeing consignments being sent from Tirupur to the Ludhiana units.