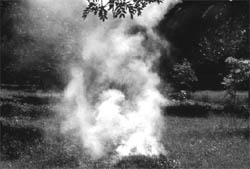 If the politics of dioxin is knotty, the public health problem of it is trickier still. Dioxins are all pervasive, so there is no safe threshold level for dioxins in the human body. For this very reason, after a four-day long heated debate on June 4, 1998, the World Health Organisation lowered the tolerable daily intake of dioxin from 10 picogrammes per kilogramme (pg/kg) bodyweight to 1 to 4 pg/kg bodyweight. While nobody is sure how much dioxin a person can tolerate without health implications, one thing nobody debates is that dioxin should be prevented wherever possible.

The Ninth Report on Carcinogens from the National Toxicology Programme of the us has set the alarm bells ringing by adding 2,3,7,8 tetrachlorodibenzo-p-dioxin ( tcdd ) to the list of known carcinogens. The epa believes that people who eat rich diet containing dioxin may face a 1-in-100 risk of developing some form of cancer, diabetes or immune system disorders. Another study found a dose-dependent increase in risk of cancer and heart disease among a group of 1,189 workers at a pesticide manufacturing plant in Hamburg, Germany, who were exposed to dioxins between 1952 and 1984.

Marilyn Fingerhut of the National Institute for Occupational Safety and Health ( niosh ), usa , studied the health of 5,172 workers at 12 chemical plants that manufacture or used to manufacture products contaminated with dioxins. Out of the total, 1,520 had nine times the normal amount of soft tissue sarcoma. Workers also had 42 per cent more cancers of the respiratory tract. These studies are enough to establish the dioxin-cancer link. Taking into view epa 's findings, environmentalists have estimated that about 100 of the roughly 1,400 cancer deaths occurring daily in the us are due to dioxins.

The health threat posed by dioxins are profound. Dioxins can cause skin rashes, skin discolouration, excessive body hair and possibly mild liver damage. That's not all. Diseases such as lymphoma, soft-tissue sarcoma, spina bifida, hydrocephalus and chloracne are also linked to dioxins. A study of Vietnamese veterans, conducted by the us air force physicians, also links dioxin exposure to increases in psychological damage, liver damage, cardiovascular deterioration and degeneration of the endocrine system. Researchers at the niosh found reduced levels of testosterone -- male sex hormone -circulating in the blood of dioxin-exposed male workers.

Worse, another study reveals a high prevalence of leukaemia among children of Australian Vietnam veterans. Children exposed to dioxins in the womb during critical periods of development appear to be the most vulnerable to the toxic effects of dioxins, says a recent American People's Dioxin report by Centre for Health, Environment and Justice. This goes on to show that the risks from dioxins are greater for children and babies because of their higher milk intake, including breast milk and other dairy products. A French magazine Que Choisir recently reported the results of tests showing an average level of 21 picogrammes of dioxins in the breast milk of 15 French women living in rural and urban areas. This was 20 times the set admissible daily dose of one pg/kg of the bodyweight.

Similarly, the Japanese Health and Welfare Ministry findings, based on an analysis of the breast milk taken from 487 women from 1997 to 1998, reveal that dioxin levels are higher among women who eat meat often. A recent report submitted to Britain's Department of Health showed that breast-fed infants receive 17 times the tolerable amounts of dioxins and polychlorinated biphenyls (pcbs). The epa study also emphasises that dioxins can prevent the immune system from developing properly in an unborn child with lifelong consequences thereby endangering the new generation.