A small area in northern Vadodara is cluttered with nearly 200 industries, most of them dealing in chemicals. This has created serious environmental problems. The water is unfit for drinking, the air full of toxins, and the once-rich farmland surrounding the industrial area is now classified as degraded 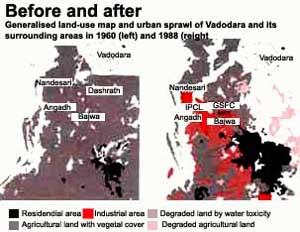 BAJWA, a village in Vadodara district of Gujarat, looks no different from the other villages that dot the state. But people here breathe toxins, drink contaminated water and have no agricultural land to be proud of, in productivity terms. Over a period of 30 years, this village and the area around has urbanised somewhat, and has been turned into a pollution hothouse with excruciating consequences for the local people. This is a direct consequence of the government turning a blind eye to the industrial waste accumulating for over 30 years. According to Suren Choksi, a noted Vadodra geologist associated with several companies, there are already over 190 industries in northern Vadodara. And the government continues to give licences for expanding or creating new capacity. These are in fertilisers, petrochemicals, pharmaceuticals, H-acid, and dyes.

In 1969, the Gujarat government appointed a technical committee to look into the increased pollution load of the Mahi and Mini rivers, which flow about 45 km away from the hub of the industrial township that incorporates Bajwa. These rivers had been made repositories of chemical waste from the industries around. So shocking was the situation that the committee had to suggest the creation of a 56-kilometre long effluent channel to tackle the waste, the first in India. The channel was commissioned in 1983. It passes through 24 villages of Vadodara and Bharuch districts before emptying into the Gulf of Cambay. But barely 10 per cent of the flow reaches the sea, as 90 per cent of the effluent water is taken out by farmers for their fruit and vegetables which end up in markets in Surat and Mumbai, says Choksi. Irrigation pumpsets virtually line the channel. No toxicity tests have been conducted on the fruit and vegetables grown here.

The Gujarat State Fertilizers Company (GSFC) began operating here in 1967. It simply dumps its gypsum and chalk waste in the area. By now a waste mountain has been created, about 40 metres high, spreading over a 14-hectare area. In the heavy rains this year - on July 6 - the four-million-tonne waste mountain collapsed, sending its toxic slurry into people's homes in Bajwa village. The GSFC'S wall that separates the industrial complex from the village did not even prove a minor obstacle. The waste is impregnated with heavy metals.

Quite apart from the solid waste mountain, the GSFC has in its complex four huge ponds, two each for gypsum and chalk slurry. This toxic slurry percolates to the groundwater, which people have to consume for living purposes. This contamination of the groundwater is thought by people in the area to be a key factor for their contracting a range of illnesses that were not common three decades ago. The waste mountain that has literally been erected over the years is nothing but the dried slurry of the four ponds. When the watery muck dries, and begins to fly round, GSFC simply piles it up. And thus the mountain which forms the back drop for the village that is referred to as the "Kashmir" valley by the people, and the dirty ponds are likened to the famous Dal Lake.

The slurry from the "mountain" getting into people's homes in the rainy season is a near-annual phenomenon. This time it only happened to catch media attention. And people have to clean the filth themselves after it is washed down by the rains. Surveys conducted by reliable and prestigious institutes clearly indicate that toxic impurities such as cadmium, lead and zinc and other heavy metals infuse this waste. It is this which gets into the groundwater and destroys the agricultural productivity of the land here (see map: Before and after).

Is this waste hazardous or not? If it is, the situation is infinitely more serious than is thought. But the verdict is not so clear. Are chalk and gypsum hazardous? Rules and laws are ambiguous and unclear. As per Hazardous Waste (Management & Handling) Rules 1989, the waste in Bajwa should fall under Category 16 of Hazardous Waste Rules. According to these rules, if a waste pile generated is more than 200 kilograms per annum, the classification is "hazardous", and the waste has to be managed in "an environmentally safe manner".

This was the advice tendered to the GSFC by the National Productivity Council (NPC) in October, 1997. However, A K Saxena, director (environmental division), NPC, says most of the hazardous waste rules are "misleading and need to be reformulated". Whether the waste piled up sky high in the Bajwa area is hazardous or not, the Environment (Protection) Act 1986 makes the setting up of a proper hazardous waste disposal site mandatory for chemical plants, which abound in the region. Talking to Down To Earth, V V Modi, chairperson of the Modi Committee, constituted recently by the high court to look into pollution problems in Vadodara, suggested that industries in the area needed to take a serious look at this provision. Till today, GSFC is searching for a proper dumpsite to dispose of its waste. According to Choksi, the company will have to soon find a way to remove the waste from the area.

A study conducted in the 1980s by the National Environmental Engineering Research Institute (NEERI), Nagpur, indicates that leachates from the dumpsite may have found their way into the groundwater. K K Shah, a doctor and resident of Bajwa, after an analysis of his well water, confirmed the NEERJ finding. Even a study conducted by the civil engineering department of M S University, Vadodara, found evidence of high levels of toxins in the groundwater.

Shah says that many patients in the region suffer from renal, kidney, hypertension, thyroid, gastroentitis and respiratory problems, and several women have been reported to have abnormal pregnancies. However, the state government has not yet initiated any health study to find out the effect of pollution on human lives.

Recently, the Vadodara Gramya Pradushan Nivaran Samiti (VADPRAN), a non-governmental organisation, prepared a report on the basis of a ground-water analysis in villages near the GSFC plant. It shows that the total dissolved solids levels (TDS) in the groundwater samples collected from Bajwa were as high as 7,700 milligram per litre (mg/l), the permissible limit being 2,000 mg/1 (see chart: Breathing toxins)

The groundwater is so heavily contaminated that even GSFC is forced to bring water to the company's township from the Mahi river. This water has a TDS level of 300 mg/1. GSFC is also providing water facilities to some villages badly affected from the waste dump. Interestingly, J M Barot, member secretary of the Gujarat Pollution Control Board (GPCB) said, "There is no ground-water pollution in the area due to GSK;." Shah retorts, "If it is potable, why don't GSFC officials drink the same groundwater?"

High levels of groundwater contamination have forced villagers to seal most of the borewells in Dashrath, Channi, Bajwa, Ranoli, Padmla, Karachiya and Undera. "In Dashrath alone, 20 borewells have been sealed, The water is not even suitable for irrigation," says Bhanubhai R Patel, a local politician.

Villagers had earlier demanded that GSFC provide them safe drinking water, but when their demand was not met Shah placed a groundwater analysis report before the Gujarat high court on behalf of the villagers. In an oral order on October 1, 1997, a division bench headed by Justice B C Patel and Justice S M Soni positively confirmed Shah's findings about the presence of cadmium, cobalt and copper in the ground-water. It also took cognisance of the study done by NEERI which reported presence of toxins in the GSFC waste dump. Later, the bench directed the National Institute of Occupational Health (NIOH), Ahmedabad, to carry out a study on the ambient air quality around the GSFC factory. Interestingly, according to Shah, both the judges were soon transferred and the new bench rejected further petitions by the villagers. The villagers have now moved the Supreme Court.

The NIOH study ordered by the court earlier found that the daily average concentrations at Dashrath, Bajwa and Karachiya during November 18-21, 1997 was higher than the air quality standards (AQS: 80 mg/cubic metres for residential area). NIOH also stated that prolonged exposure to this could lead to respiratory problems, exacerbation of diseases in chronically ill persons, sensory and behavioural abnormalities and heart diseases. Choksi says that till today detailed information is not available about the types of effluents generated by the northern Vadodara industries and their implications for the environment. He also says that some of the factories in the area release oxides of sulphur into the atmosphere which dissolve during the rains. This rainwater scars plant life in the region. A study conducted by Vadodara Urban Development Authority states that 30 per cent of the mango and rayan trees in the high air pollution zones did not bear any fruits. Crops in villages, such as Omkarpura, Ranoli, Damapura, Angadh and Bajwa have been badly hit because of degrading soil fertility and poor quality of ambient air.

Farmers complain that they are not getting buyers for their fruits and vegetables. These fruits ripe and rot overnight because of the poor ambient air quality. "I am forced to sell 20 kg of banana for Rs 6," says Poonambhai Chotabhai Patel, a farmer in Channi village. He puts the blame on air pollution caused by GSPC.

Till today, the industries cluttered in northern Vadodara do not have any disaster management plan. The Modi Committee has recommended four important plans in the area: proper information channel, transporting victims in case of an accident, medical treatment facilities, and rehabilitation centres. Modi says that the industries have been flouting environmental norms for years now, but this doesn't seem to bother GPCB. "If some big disaster takes place, we are not equipped to meet the challenge," he says. A former board member of GSFC says: "A major disaster in this industrial township could prove to be more devastating than Bhopal."

With regard to the GSFC waste, V L Patel, additional general manager, GSFC, says: "At present, the company can only manage the waste in its complex till it gets another dumpsite." Meanwhile, the local administration has ordered GSFC to take all precautions to avoid repetition of such an incident, says Anil Kumar Mukim, district magistrate of Vadodara.