The pugmark method of counting tigers in the wild is a tedious exercise. But this method really works amidst all modern criticism and technology 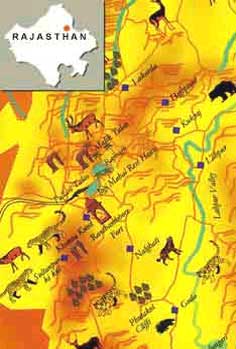 It was 6 in the morning when we reached Sultanpur post of Sawai Madhopur range of Ranthambhore National Park, manned by a lone forest guard Nawab Singh. Thus began our fortnight long tiger tracking on foot -- the pugmark method of counting tigers after a briefing on the procedure.

Spread over an area of 1334 sq km, including a core area of 300 sq km of largely dry deciduous forest, Ranthambhore came into existence in 1980, covering four ranges--Khandar, Sawai Madhopur, Project Tiger Range and Kundera, each under the supervision of a ranger. The park gets its name from the towering fortress that stands in the middle of the forest and also from the two hills in the area, Ran and Thanbhore.

The excitement during the tracking was intense and every sound or movement in the scrub sent the adrenalin soaring. But the only animals spotted for most part were some chital (spotted deer), nilgai (blue bull) and sambar (marsh deer). With the assurance of an extra 'man' by his side Nawab Singh mustered courage to go deeper into the bushes, near waterholes, on to ridges and into ravines. All along was the nerve racking feeling that anything could happen and as a human being felt helpless.

The deep forest is home to a variety of birds--golden orioles, golden backed woodpeckers, blue heron and yellow flycatchers. All along Nawab Singh was full of tiger tales. By noon, though we had covered roughly 23 kilometres, there was no sign of a pugmark.

Collecting pugmark is a complicated procedure and the first step is laying out of pugmark impression pads (pips). These are random two metre patches of fine earth spread along the width of the track laid out in such a way that at least one of them registers a tiger walking past. To lay out the PIP, the soil is removed to a depth of at least 0.02-0.03 metres and the area filled up with fine earth sieved through a wiremesh.

The search for pugmarks is carried out all along jeep tracks, riverbanks, beds of dry streams, firelines and water holes. To record, the best hind pugmark of the right or left paw is selected. If no hind pugmark is available then the front pugmark is selected but this makes the determination of sex difficult.

Though impressions of all four pug marks are left on the ground, only the hind mark usually remains undisturbed by the tiger's walk and remains intact for recording. This is because, during a normal walk the hind paw comes to rest wholly or partly upon the corresponding front paw -- left upon left and right upon right. During a slow walk, the hind pugmark falls behind the impression left by the front paw. And during a fast walk the hind paw goes ahead and falls in front of the front pugmark.

Our next itinerary was Lahpur, which lies at the centre of the core area in the Khandar range. Enroute Lahpur, we were rewarded with the sighting of a Caracal, a most elusive and rare member of the cat family and in the evening was the first rendezvous with the tiger. It was lying by the side of a waterhole known as Sakri nalla but its snarls made it clear that any intrusion was unwelcome.

Work began early at 5.30 the next morning along with forest guards Ram Kalyan, Babulal and Murari. On the first two days of trekking around Lahpur, only pugmarks of a sloth bear and a ratel or honey badger were recorded.

After Lahpur it was Thumka, also in Khandar range, where the tracking party soon came upon a set of pugmarks. A clear pugmark was identified for tracing. Tracing is done on a tiger tracer, a glass sheet mounted on a wooden frame which is placed on the pugmark in such a way that the glass surface remained as close to the pugmark impression as possible without touching it. An outline trace of the pugmark along the pad, the notches and toes is made with a sketch pen. It is then transferred to a tracing sheet. After tracing, a plaster cast of the impression is made. For this a square wooden frame is placed over the pugmark and plaster of paris of a thick consistency poured on to the demarcated area from one side. The whole cast takes about 20 minutes to dry up and before it completely hardens the counting unit's name, number, date, location, length of stride and step and finally the reference number of the tracing are recorded on the cast. The whole exercise took almost an hour and we proceeded to track down that particular tiger, leaving the jeep track and moving into the bed of a dry stream as we tried to maintain our balance on the stones without making a noise. A strong stench led to a half eaten nilgai carcass and a sudden growl forced us to freeze. The Khandar ranger Vijay Dahiya instructed to slowly step backwards.

After dinner, equipped with searchlights we hit the trail but this time in a jeep. The moonlit night made the forest more eerie. There were no signs nor any alarm calls to guide us when the driver suddenly slammed the brakes. Glowing in the headlight of the jeep were six shining blue eyes. A magnificent tigress with her two grown-up cubs devouring a freshly killed sambhar. All day long we tailed a male tiger but the tigress with her cubs plus a kill made a rewarding end to the day.

All the field data collected is transported to Jogi Mahal, on a daily basis, where mapping and analysis of the census is done simultaneously. The types of data available for interpretation range from records of sighting or kill, records of direct sighting on field, tracings of pugmarks along with relevant field information, plaster casts of pugmarks and the direction of movement. Later in the day, the field director, deputy field director along with the rangers carry on with the analysis work.

Efforts are made to identify each tiger as accurately as possible, in its territory. To determine if the pugmark belongs to a male or a female, a right-angled quadrangle is drawn touching the outermost extremities of the whole impression, including the toes. If the entire shape is close to a square then the animal is a male and if it is rectangular, then it is a female. The shape of the toe prints of hind pugmarks also helps in determining the sex of the animal. Toe prints of males tend to be round or oval, while those of the female are more elongated. On the last day of the census we set off before sunrise from Jogi Mahal and while nearing a banyan tree some langurs suddenly sounded an alarm. There was a juvenile tiger less than 10-feet (convert to metres) away crouching with its eyes fixed at us. Luckily it stayed in the same position giving us ample time to move away. As we beat a hasty retreat, we could see it following us. The main concern was the tigress, which was close by and would definitely attack if she perceived any threat to her cubs. But no such thing happened. It was later during the day that the whole family of tigress and her two cubs were seen resting under the banyan tree.

A remarkable ending to a remarkable exercise. An estimation of 33-35 tigers were made, including 11 cubs at the end of the whole tedious exercise. A system which really works amidst all modern criticism and technology.

As for the magnificent animal, as noted tiger expert John Seidensticker puts it...