An academy that aims at converting tribals to anthropology; where the Bhils crossover from being mere objects of study to an active role in studying themselves 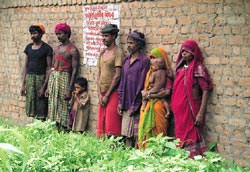 A woman in her mid-twenties, probably of European descent, is trying to explain something to a group of Bhil tribals in village Tejgadh, Chhota Udaipur block, about 90 kilometres east of Vadodara city, Gujarat. Huddled, in a makeshift building on a 10-acre plot, all those present pour over a couple of copies of some document.

This is the temporary 10,000-book library of the Tribal Academy run by Vadodara-based organisation Bhasha. The document they are discussing intently is a site plan. Narayan, one of the participants, turns around to explain the goings-on, “This is for our ‘rural technology centre’. She (the woman we noticed earlier) is a design engineer on internship from Holland, and has built the plan. We’re discussing its pros and cons.”

Who are ‘we’? “Oh, we are all teachers at the academy. We are planning a technology centre to showcase our traditional technologies and nuggets of the traditional wisdom passed down orally. We want to be sure we understand what the engineer has visualised,” Narayan responds. A difficult task, because the ‘teachers’ at the academy are Bhil tribals, with little knowledge of English. They are the first pass outs of the diploma programme in tribal studies.

But Narayan is able to express the modification he’d like to make to the plans, “I want the earthen check dam we have built on the plot to be part of the museum. That too is our knowledge.” Everyone agrees. Now they need to look for a solution to the problem of making a dam an exhibit in an exposition.

This is what Bhasha and the academy are all about. Begun by G N Devy, a renowned linguist based in Vadodara, the academy tries to make anthropologists out of the tribals. In an academic inversion of sorts, the Bhil tribals (so often the object of study) study themselves, and decide what about them is worth studying.

Bhasha’s and the academy’s work is a unique mix of academic endeavour and social development work. Bhasha brings out a magazine called Dhol in eight tribal languages of western India, including Kukna, Dehwal, Dungri bhili and Bhantu — recording the oral traditions of that region. In keeping with Bhasha’s philosophy, the editors of each edition are the tribals themselves.

It also runs a microcredit scheme in and around Tejgadh, and tries to create and build a market for tribal products. The academy runs medical camps and operates schools in the region as well. The area being renowned for the pithora paintings, Bhasha has helped form an artistes’ cooperative society, which arranges workshops and exhibitions, and also provides monetary support.

“One cannot carry out academic work in isolation,” says Nima Gadhia, a linguist who works with the academy. “The academy gives the people space to explore their own systems and record them in a format that others can understand easily. In return it gives them economic opportunities and instils pride in their existing social systems.”

G N Devy is modest about his dream project, “We are not doing anything fantastic, it’s an attempt at doing what we think is very necessary — building an understanding of how ecological rationality is a leitmotif in the tribal languages. We train tribals through the courses at the academy to inculcate a tribal idiom in education. Then our students — tribals from this region — become teachers and fan out to other villages, setting off a ripple effect. They run schools in their own language and provide a base for ideas to help their communities adapt to the changing realities of a developing world.”

An onerous task, but Devy says he’ll begin with the rural technology museum. The tribals themselves will build the museum around the check dam in two years’ time. He invites Down To Earth to come back for the inauguration.