Tribals solve problems through self - reliance

The Budakattu Krishikara Sangha, with its emphasis on people-oriented strategies, has improved tremendously the lot of the tribals in and around Honsur taluka.

Tribals solve problems through self - reliance 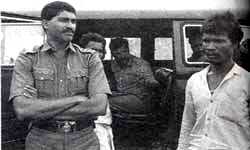 ON AUGUST 9 the nation was observing the golden anniversary of the "Quit India" movement; that day, in Neralakuppe (A), a settlement of 40 Jainu-Kuruba households near the Nagarhole sanctuary in Karnataka, a different drama took place -- all the villagers fled to the jungle in fear.

They were frightened because a couple of days earlier, they had roughed up two non-tribal youths for molesting a Neralakuppe (A) girl and the two had returned with their friends, thrashed almost everyone in sight and promised to be back for more. The authorities did nothing to protect the villagers till August 12, when the local MLA visited the village and the police arrested the guilty youths.

Neralakuppe (B), another Jainu-Kuruba settlement of 30 households, has organised the Budakattu Krishikara Sangha (BKS) as a measure of redressal against such attacks. Village leader Somayya explained, "The problem is not with the people of Neralakuppe (A), but their leaders. Inspite of all our efforts, they refuse to join our organisation, the Budakattu Krishikara Sangha (BKS), of which nearly all the adivasi hadis (hamlets) are members, or to set up an organisation of their own. The non-adivasis do not dare enter BKS villages without permission. Because of the BKS, harassing us is no longer that easy."

The BKS was formed in 1982 by Karayaiah Bharatwadi, a bonded labourer of Bharatwadi village in Honsur taluka, and has as members representatives from all the tribes in the region, such as the Yeravas, Betta Kurubas and The Soligas. etc. The idea of forming such a group has since been picked up by villagers in 10 neighbouring talukas, with the BKS directly involved in six of these. Twenty-two of the 35 villages in Honsur are members of the BKS. The villagers select two persons to serve as central committee representatives for a term of two years each and this term cannot be extended. The central committee meets every month, while general body meetings are held annually. The BKS brings its members information about government schemes that would be of use to them. Voluntary agencies in the area also work through the BKS. are covered.

The formation of BKS was facilitated by the Honsur-based voluntary organisation, Development through Education (DEED) that has been active in the region since 1980. DEED director S Sreekanth said, "I have not attended a single BKS meeting since the last two years. Yet the meetings are held regularly, and the people themselves work out strategies to solve their problems. They meet officials on their own and get their work done. In an area where there is hardly any development, this is perhaps the only way to make things work."

But BKS is not the only association the tribals have formed. Every hadi has its own association, which meets formally every month. There are children's associations as well, and the women's association, called the Girijani Vanavasi Mahila Sangha (GVMS), was formed in 1984. GVMS, like the BKS, is a taluka-level association with branches in every village. The women engage themselves in income generating activities, according to their needs and the availability of resources in their village.

In the last 12 years, DEED has worked behind the scenes to improve the lot of the tribals. The Jainu-Kurubas, for instance, were semi-nomadic tribals whose original occupation was shifting cultivation and collecting honey through a traditional method called jamma. Each clan had its own area of operation and trespassing was rare till the government interfered and declared them a primitive tribe. Then the forests were declared out of bounds for the Jainu-Kurubas, who were forcibly settled with small amounts of land, and literally forgotten for no schools or electricity was provided them. Seventy-year-old Sommayya recalled his youth when he'd worked as a labourer clearing a 400 ha forest for a non-tribal landlord: "The administration and its officers forgot about our settlements till the DEED people came."

DEED got the government to build low-priced houses in Neralakuppe (B). "This helped us build a rapport with the tribals and initiate the process of organising them," says Sreekanth. Today, more than 60 per cent of the tribals of Honsur taluka have their own land, house and livestock. DEED has pushed the government into opening schools in the area. Creches are run with the help of grants from the Central Social Welfare Board. An effort is also being made to revive traditional medical practices and the cultivation of medicinal herbs as is evident in the herbarium that local tribal youths are cultivating in the DEED office compound.

Recently, DEED has started promoting activities that will regenerate the environment. Apart from planting trees and training women in raising nurseries, efforts are being made to revive indigenous water harvesting practices. DEED's role in all these activities is to help the people form committees and then let them fend for themselves.

Sreekanth, who is also president of the Federation of Voluntary Agencies For Rural Development -- Karnataka (FEVORD), says modestly, "We are just the catalysts. The people do everything themselves. They just have to be started off, strengthened and empowered. After a few false starts, we realised that organising the people is the best development aid."

Sreekanth summarises DEED activities thus: "Our work areas and emphasis can be classified into nine M's. The first aspect involves mahile (women), makkalu (children) and mane (home). The second aspect is to promote consciousness about caring for manno (soil), mara (vegetation) and malay (water). But to do all these, it is essential that people have mana (dignity) and get matha (opportunities to learn). This involves changing the manaswa (attitudes). I feel we have been able to change not only the attitudes of the non-tribals towards tribals, but also of the tribals about themselves."

DEED is working among non-tribals, too. In Halebeedu village, it is teaching entrepreneurship skills to the potters. People, voluntary organisations, technical institutions, banks and the government are all working together in this novel experiment, which has trained 19 potters, both men and women, so far.

The Girijani Sampanmula Samithi (GSS), a tribal resource committee consisting of BKS and GVMS leaders, activists, educated youth and traditional leaders, was formed in May 1991 to look after development work in Honsur taluka. The GSS meets every three months, and monitors financial matters and supervises the work of its constituent associations. In the long run, the members intend that the government carry out all its development work through the auspices of the GSS.