From imposing restrictions on harvesting of shark species to having second thoughts about them, the authorities seem utterly confused 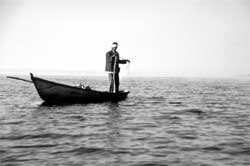 On july 11, 2001, fisherfolk across the country were thrown in at the deep end when the Union ministry of environment and forests (mef) announced a blanket ban on the catching, processing, stocking and sale of 60 types of sea creatures. These included the entire sub-class of elasmobranches (sharks, rays and skates), certain varieties of corals and 52 kinds of molluscs.

The mef's unilateral decision sparked nationwide protests by fishworkers who faced the threat of going under. As the agitation intensified and assumed political overtones, the government was forced to review the regulations. Last heard, a watered down version was in the pipeline.

What prompted the authorities to slap this sweeping ban? And why the haste? S C Sharma, additional director general of forests, mef, says the drastic step was required to protect sharks and other endangered marine life. "After the notification was issued, we had consultations with scientific institutions and fisherfolk. We saw no need to do this earlier," reveals Sharma, betraying the authorities' characteristic insouciance.
In May 2001, the whale shark (Rhincodon typus) was brought under schedule one of the Wildlife Protection Act (wpa) of 1972. Schedule one comprises the most endangered animals, which are provided maximum protection. Conservationists all over the world hailed this much-publicised move of the mef to save the commonly slaughtered whale shark (see 'Blood on the beach' Down To Earth , Vol 9, No 10). Then, in July, a gazette notification was issued as per which 60 sea animals were put in the schedule one category. Figuring in this list were all the 51 species of sharks found in Indian waters.

Significantly, unlike in May, the powers that be sneaked through this decision. It was such a hush-hush affair that fishworkers came to know of it only in September-end when the Coast Guard disallowed shark fishing in Cochin, the Customs blocked the export of shark fins in Chennai and a consignment of conch shells (shankh) being imported from Sri Lanka was seized in Kolkata. "We became aware of the curbs only after some fisherfolk were arrested," says Vincent Jain, convener, Action Forum Against Ban, a group comprising activists from Tamil Nadu and Kerala.

As the implication of the mef move sank in, there was a widespread outcry in the shark fishing industry. Among the southern states, Tamil Nadu and Kerala were the worst-hit. While about 50,000 families would be rendered jobless in the former, 6000-7000 households would be affected in the latter. Shark meat is also consumed in the coastal areas. "It is not a delicacy, but a staple in the diet of the poor," says K Gopakumar, deputy director general (fisheries), Indian Council of Agricultural Research (icar). "This is a livelihood issue," avers Sebastian Mathew of the International Collective in Support of Fishworkers, a non-governmental organisation (ngo) based in Chennai.
What was the provocation for the mef to adopt such a draconian measure? "A survey was carried out in the Andaman Islands by a joint team of Sanctuary (a monthly published from Mumbai) and Reefwatch (a Mumbai-based conservation institute)," says Ashish Fernandes of Sanctuary Asia. "We did not find any sharks there and this was communicated to the mef," he adds. The environment ministry, on its part, claims to know very little about individual shark varieties. "We had to go by The World Conservation Union (iucn) data and impose a ban as a precautionary step," says Sharma. The mef has been cagey about the scientific basis for the restrictions. When pressed for details, all that the officials were willing to say was that they had data to validate the decision. But they refused to divulge facts. It is, however, alleged that the mef did not consult scientific organisations such as the Central Marine Fisheries Research Institute (cmfri), Kochi, which specialises in fish studies. "The move is highly unscientific and arbitrary," alleges Mathew. "Fisheries Survey of India and cmfri have no data about particular shark types," retorts Sharma. "Information about individual shark species has been handed over to the government," clarifies Mohan Joseph, director, cmfri . Gopakumar rues the fact that despite icar possessing scientific knowledge based on data collected over the past 50 years, the institute's advice was not sought by the mef. cmfri findings show that shark harvesting constitutes less than two per cent of the total fish landings in India. According to its report 'Revalidating the potential of fishery resources in the Indian exclusive economic zone', as against a harvestable potential of 45,064 tonnes of sharks, the average catch has been 35,000 tonnes annually for the past two decades. "If one goes by cmfri data, there does not seem to be any marked decline in shark numbers," says Mathew.


The fishworkers' rage that had simmered over the past month exploded on November 21, 2001 (World Fisheries Day). Activists from all over the nation converged on Delhi and staged an indefinite dharna (sit-in) at Jantar Mantar. Earlier, demonstrations had begun in almost all coastal states. Even as fisherfolk blocked highways and harbours in southern India, there were rallies and dharnas in West Bengal and Orissa. On November 1, fishworkers' bodies, trade organisations, ngos and scientists gathered in Nagercoil, Tamil Nadu, at the invitation of National Fishworkers' Forum (nff) to discuss the ban.

The fisherfolk were shocked at not being consulted by the mef. "It is ironical that the stakeholders were not consulted," laments Mathew. Jain feels the same. nff dubbed the move as "arbitrary, unjust, unscientific and a disaster". As the wave of protests gathered force, politicians -- never losing an opportunity to score brownie points -- took up cudgels for the fishworkers (see box: In the jaws of politics ). Several members of Parliament have raised the issue in the winter session, demanding an immediate withdrawal of the ban. Representations have also been made to Union environment and forests minister T R Baalu.


Bowing to mounting pressure, the Union government has finally decided to review its decision. The proposed new notification includes only nine elasmobranches, apart from the whale shark, in schedule one. "Since shark fishing is not targeted, we thought of reviewing the ban and keeping only the endangered species in the protected list," reveals Sharma, appearing wiser with hindsight. Among the molluscs, 28 species (including conch shells) are now outside the purview of the regulations. Sea horses and sea cucumbers, however, stay in schedule one.

The mef seems to have been shaken out of its stupor and is taking a slew of measures as part of a damage-control exercise. It has begun discussions with scientific organisations. "Coastal and marine authorities are being approached for advice, because for implementation of the notification we will have to depend on the Coast Guard and Navy," says Sharma. The ministry has also commissioned cmfri and the Zoological Survey of India to conduct a study on sharks. For all the hectic activity, wildlife laws in India tend to remain on paper only in the absence of an effective monitoring mechanism.


Unity of command, and thus synchronisation, are absent in the management of fisheries in India. While the Union commerce ministry handles the trade aspect of fishing, the mef is in charge of conservation. Further, the Union ministry of agriculture looks after the development of the sector. "This leads to a clash of interests and lack of coordination," says Mathew.

The big poser is: how can niggling problems be tided over?

• Conservation and management are the core issues. A detailed plan and long-term policy must be chalked out

• Models that are being practised in the North can be studied. Western European nations, Australia and the us have all accorded some sort of legal protection to sharks

• The un's Food and Agriculture Organisation (fao) has a clear-cut management plan for sharks. This, too, can help chart a comprehensive course

• Restrictions should be based on feedback from technical experts

• Since shark fishing in India is mainly untargeted (the shark is only caught during fishing for other marine life), methods such as seasonal or rotational ban are more likely to succeed

• Other solutions include fleet control, which implies curbing the number of fishing boats, and gear regulations such as the size of the net

With the complete ban being replaced by diluted regulations, the Union government is set to cast its net narrower.