Trouble in the deep

Illegal fishing activity near the shoreline is taking a major toll

Trouble in the deep 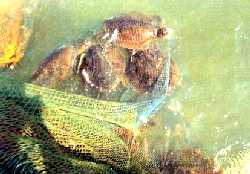 IN 1975, when she was prime minister, Indira Gandhi had suggested deploying Coast Guards to check illegal trawling with a view to leave the Olive Ridleys unmolested in the Orissa area. Gahirmatha had just been brought to the attention of the world by Bustard. Over the years, however, there was no serious supervision. When the Olive Ridleys did not nest - though they arrived - in 1997, the state government brought in the Coast Guard last October. The mating season commences in October and ends in May. Coast Guards sources say 200 trawlers and their crew were apprehended this year alone. Yet everyday 60-70 trawlers set out to sea along the Orissa coast, and there is only one Coast Guard vessel to patrol the entire Orissa coastline. This is grievously inadequate.

A trawler net must have a special device, known as the turtle excluder device (ted), if it is not to trap turtles. The ted costs about Rs 10,000.However, using it reduces ordinary fish catch by 10 to 15 per cent , a figure suggested by the National Marine Fisheries service in the us. This is why trawlers, operating legitimately or illegally, avoid using the ted. This causes large-scale turtle death. A sea turtle must surface every 10 to 15 minutes to breathe. The net keeps it underwater for hours. Thus the creature is forced to gulp water into its lungs instead of air, and dies an agonising death. Ninety per cent of turtle casualty off the Orissa coast is due to this unintentional catch by trawlers, says Pandav.

Unfortunately, trawlers cannot be forced to use the ted as there is no binding legislation in India. In July 1997, a high-level committee on the protection of Olive Ridleys, chaired by the chief minister decided to make ted use compulsory. The director of fisheries was instructed to implement the decision forthwith. But nothing has so far happened. Perhaps this is not so surprising, as the union agriculture ministry has asked the state fisheries department not to use teds until there is a legislation about it.

In all 458 trawlers are registered with the directorate of fisheries. The number of illegal trawlers, however, is much greater, says Chitta Behera of the non-governmental organisation (ngo) Project Swarajya. Project Swarajya is implementing a Global Environmental Facility- funded project on popularising teds. According to Behera, not a single trawler operating in the Orissa area uses teds, though Orissa was the first state in India to obtain ted technology from the National Marine Fisheries Services.

Surprisingly, the fisheries department gives the trawlers factor a clean chit. According to the fisheries and animal husbandry minister of the state, Prakash Chandra Debta, it is "marine pollution and fatigue from long distance travel" which is responsible for the Olive Ridley deaths. Experts find this baffling. Notes Priyambada Mohanty-Hejmadi, vice-chancellor of Sambalpur university, "This reason is simply unreasonable. The Orissa coast is relatively free of pollution. and even if it were polluted, it is the fish population that should succumb first".

The state pollution control board chairperson, M C Das, who has done extensive study on the Olive Ridleys, agrees with Hejmadi, and calls the fisheries department reason as 'unscientific'. "There is no question of marine pollution in Orissa and even in the Paradeep port area. The level of pollution is relatively little. So, the idea of these turtles dying because of pollution is inconceivable."

Turtle experts also find it difficult to accept the "travel fatigue" argument."Fatigue can't be a reason as turtles are migratory in nature and can withstand thousands of miles of journey. Also, the dead turtles found were healthy. Indeed, many were pregnant", says Bivash.

"If seeing is believing, I have witnessed turtles being killed and drowned by trawlers. What more do you need?" he asks.

Trawlers are not the only menace to Olive Ridleys. The turtles also get caught in gill nets used by traditional fisherfolk. To disentangle them from the nets, fisherfolk either hack their heads off or plunge iron rods into their eyes to drag them out. There are also a few incidents of turtles being killed by using pesticides to poison them. However, traditional fishing methods are not so significant in explaining Olive Ridley deaths.

All the same, human intervention in the area of turtle activity, in general, is believed to discourage the turtles, as was the case in Mexico. And in Orissa in the last five years, the coast has seen mushroom growth of large fishing jetties promoted by the state government. Two fishing harbours which have come up at Dhamra and Paradeep, to the north and south of the Bhitarkanika wildlife sanctuary, under which the Gahirmatha rookery comes, are hardly a few kilometres away from the route the turtles take.

Even inside the sanctuary a massive fish landing has been constructed at Talchua which, according to the coast guard attracts at least 150 illegal trawlers from Orissa and Andhra Pradesh. This violates the provision that no fishing activity should take place within 25 km from the shore of the sanc-tuary. Ironically, this facility has been built jointly by the union agriculture ministry and the state fisheries department. The chief wildlife warden of the state has not given it sanction. Nor has the central government. But it exists and operates!

At Rushikulya, work on two small fish landing centres is in progress- one right on the river mouth and the other nearby. The turtles are in great danger here as the land use pattern is changing from agriculture to intensive prawn culture in the areas behind the nesting sites.

In the last 23 years, mass nesting failed to take place in 1982 and 1988, but never in two successive years. The failure to nest in 1982 was attributed to mass poaching when 70,000 to 80,000 turtles were hunted down in 1979-80. Some experts put the blame for the absence of nesting in 1987 on El Nino. They argue that the marine food chain was disrupted due to this abnormal ocean current. The changing land use patterns are making matters worse. Bright lights in the prawn fields are disorienting the nesting turtles as well as the hatchlings. The hatchlings are attracted by the lights and instead of heading for the sea, they go in the opposite direction. They end up being found on private lawns, badminton courts and football fields.

"The Orissa coast, particularly the beach where turtles nest, is very fragile and has changed drastically. This has affected mass nesting in a great way", says Hejmadi. It has been noticed that the area available for nesting has eroded considerably in Gahirmatha since the rookery was first discovered. "The turtles are leaving the rookery for unknown regions. It has been observed that they are moving northwards", says Kar.

In 1975 the mass nesting in Gahirmatha was observed on a 10-km stretch of the coastline from Habalikhati to Ekakulanasi. Change from this pattern was first noticed in the early '80s. Habalikhati was abandoned and turtles moved northwards towards Ekakulanasi. In 1982 the nesting area observed corresponded to that in 1975, i.e. the 10- km coastline from Habalikhati to Ekakulanasi. The cyclone which hit Orissa in 1989 broke up the Gahirmatha beach with the Maipur river cutting right through it to open up into the Bay of Bengal, separating the sand spit from the main beach. This formed an elongated island four-km-long.In 1989 mass nesting was restricted to this newly formed island. Not more than 100 turtles nested in the beach near Ekakula forest house. From 1990 nesting was restricted to Ekakulanasi island. For this reason Gahirmatha was renamed the Ekakulanasi rookery.

This island with an average width of 30 metres, is relatively free of predators, except for birds. It has a very small area available for mass nesting. This results in a high mortality rate because too many eggs buried in a relatively small area causes overcrowding.

"After knowing that the nesting pattern is changing, we should study the sea current and other meteorological factors to ascertain the future scenario," says Das. Besides, says Bivash, the river systems should also be studied as the flow of sand through rivers might be causing changes in the beach topography, particularly in the river mouths.