By publicly disclosing the environmental status report and commissioning an ngo for its preparation, Pune Municipal Corporation has grabbed double honours 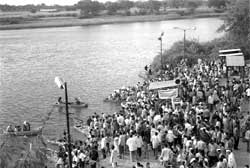 In systems traditionally known to be tightlipped, public disclosures seldom make an appearance. Pune Municipal Corporation's (pmc) initiative in publishing the environment status report (esr) for public scrutiny last year, is a bold attempt to revamp this image. While the 74th amendment to the Indian Constitution makes it mandatory for all municipal corporations to publically declare their annual report, it is pmc which has taken the lead in complying with the new dictum. What makes this transparency drive more noteworthy is the corporation's involvement of a non-governmental organisation (ngo) in this project.

Pune-based Maharashtra Social Housing and Action League (mashal) has been preparing the esr for pmc since 1996 with the sole exception of 2000. For this mashal carried out an extensive survey, collecting information from the elected members of pmc as well as the ward officers and sanitary inspectors of the corporation. This data, along with maps prepared for extended area of pmc, formed the basis of the report. The all encompassing document which states the status of population, growth, area of city, water, air and noise pollution growth of vehicles, status of hills, rivers and drains in the city.

The lastest report points to a rapidly deteriorating environmental situation in the city. While the population has increased four times, the number of vehicles has gone up by 87 times in the last 40 years. Every year, 90,000 vehicles are introduced on the roads of Pune, giving it the reputation of the most accident-prone city of the country. There are no initiatives to increase pedestrian area, make car free zones or to encourage cycles. The report says that new buses have replaced the old ones but in reality this has failed to improve the situation. Six-seater autorickshaws continue to throng the roads, spewing large quantites of carbon.

Air pollution is accompanied by high levels of water contamination. Mula and Mutha rivers, that flow through the city, receive sewage from slums and industrial effluents at various points. In 1997, the report states, thousands of fish died due to contamination in the Mutha river and Lohegaon lake. Even the drinking water is not safe due to presence of metals like potassium, magnesium and calcium in these rivers. This water can be used for agriculture and industry only. The report contradicts the civic authorities' claims that water-borne diseases are under control, stating that increase in slums near the rivers has led to a rise in these diseases.

Apart from belching out tonnes of smoke, the vehicles are a constant source of noise. The report states that noise pollution level, which has been crossing the permissible limit of 65 decibels since 1994, reaches its peak during the Ganesh festivals.

To contain this deteriorating environmental situation, the report presents a very basic set of recommendations. It suggests the introduction of environment tax. It also advocates vehicle free zones to avoid congestion on roads. With population on the rise, pmc is required to make efforts towards improving water quantity and quality. For this, the report recommends roof top rainwater harvesting.