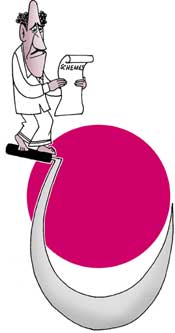 Partly to deflect censure over its spate of reforms announcements, the government has introduced two measures -- unemployment benefit and extension of medical benefits -- under the Employee State Insurance (esic) Corporation. These were announced in February by Union labour minister and esic chairperson K Chandrasekhara Rao.

Effectively, this means unemployment insurance benefits for insured workers who have contributed under the scheme for a minimum of five years prior to job loss. A provision of Rs 162 crore has been made to finance the scheme in the corporation's budget estimates for 2005-06. Laid off workers will get nearly half of their wages and medical benefits for up to six months. Under a separate move, esic will also extend medical cover to lakhs of employees in nearly 2,000 municipalities and cantonment boards across the country.

One would have expected the twin moves to have made the Left -- that has influenced government agenda with measures like the employee provident fund rate hike -- and its adherents happy. Instead, there is wide criticism.

Labour organisations like Centre for Indian Trade Unions (citu) and Indian National Trade Union Congress (intuc) feel that esic is coming up with new schemes as it just doesn't know what to do with the Rs 10,000 crore collected as contributions from the 79.1 lakh workers -- who give 1.75 per cent of wages, while employers chip in with 4.75 per cent per worker. Despite this huge fund, there are only 143 hospitals under the corporation and even the quality of medicare is abysmal. M K Pandhe, citu president says, "If esic had delivered medical benefits to workers properly, would it still have such a surplus?"

The unions feel that the under-utilised funds should be used instead to improve healthcare for all workers. Till February 16, 2005, a total of 79.1 lakh workers and their dependents were covered under the esic's employee state insurance scheme (esis). Pandhe elucidates, "The esis is meant to provide medical benefits to workers against their own contribution. But instead of more hospitals and better quality medicine, the corporation is just interested in increasing coverage and collecting more money in the name of contributions".

The much-touted unemployment benefit scheme also has no takers -- as it's a conditional benefit given only after five years of contributions. This covers just 1.5 lakh workers -- or 1.5 per cent of the total 79.1 lakh insured workers that have contributed regularly to esic . The limited time span is another sore point. "Workers have contributed this money for esic to spend on them. Then why only six months, why not for a year?" asks R P K Murugesan, Indian National Trade Union Congress.

Rao had tried to create what he called "a watershed in the labour movement". Obviously, the beneficiaries have a slightly different take on the issue.