Two in bush is better

Two in bush is better 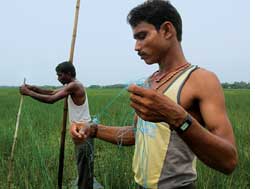 Looking at the youthful figure behind matted reeds along the shore, it is hard to believe Kishore Behera was earlier called the Veerappan of Chilika. Once a notorious bird poacher, his gaze is focussed on a purple moorhen nest. As a crow swoops down, he swings his oar with a loud cry and drives the crow away from the eggs.

Till a few years ago, the 43-year-old raided the country’s largest brackish waterbody in search of the migratory bird species from across the world that make Chilika their home. Panda grinned sheepishly through tobacco-stained teeth as he talked about his poaching days. He represents a dynasty of bird hunters in Mongalajodi, a fishing village on Chilika’s northern shores, and knows the lake like the back of his hand.


Almost every night, he and several others from his village would kill hundreds of birds and sell them in cities like Bhubaneswar and Puri. “We would use all possible methods, from nets and gunshots to lacing the water weeds with poison, to kill them,” recalled Behera. Bird meat is in demand and each piece fetched us Rs 60 or so, said Ashok Behera, also a poacher formerly. A skilled poacher could earn up to Rs 40,000 a year, he said.

Poaching was not always a business for the fishing communities in more than 130 villages along the lake. They killed birds only for the feast on special occasions. Poaching became commercial in the past few decades after the fish catch declined due to siltation in the lake, said Kishore Behera. Conserva-tionists say 5,000 fishers from these villages are now poachers. “The government does not dredge the lake properly and on top of it forest officials arrest people if they hunt birds,” he rued.

“People in my village gave up poaching after they earned from tourism,” said Behera. Wild Orissa helped us to make that switch, he added.

The conservation group stepped in after it noticed a sharp decline in bird population—by 98 per cent in two decades—at Mongalajodi. “Our initial visits to the village in 1997 were met with anxiety, but there was hope that repeated counselling would help,” said N K Bhujabal, secretary to Wild Orissa. The activists asked Mongalajodi residents how they planned to earn money when bird numbers dwindled. The message reached home.

Since the poachers know the lake and its habitat so well Wild Orissa offered to train them as conservationists and as tourist guides. This would generate steady income throughout the year and also protect the birds.

The poachers were willing; in 2000 they formed a committee and named it Sri Mahavir Pakshi Surakshya Samity. Working with 35 poachers from the village, the Samity has since been watching over Mongalajodi waters. A 2004 census by Wild Orissa showed the bird count at Mongalajodi was 300,000, up from 5,000 in 2000. Their efforts were noticed. Several government agencies have sought its help to carry out conservation work in recent years. In 2007, Chief Minister Naveen Patnaik felicitated the poacher-turned-bird guides with Odisha government’s Biju Patnaik Wildlife Conservation Award.

Wild Orissa is now working on an ecotourism project at Mongalajodi. It offers each family Rs 2,000 a month to abstain from poaching and trains the poacher-turned-bird guides. This includes educating them on English names of birds. Activists say once the project kicks off in November, it would generate employment for most villagers.

Asked if poaching happens still, Madhav Chandra, a resident, said poaching is rampant in adjacent villages where most have no other sources of earning. “Often they threaten us with dire consequences when we destroy their nets and traps,” said Behera. But he is determined to hold on to his oars. “I earn about Rs 60,000 a year as bird guide,” he said and smiled.