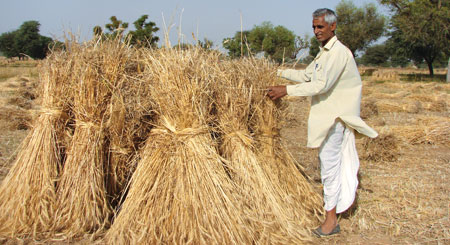 Afrequent traveller to rural parts of northern India will find something odd about the roadside sights on a ride from Jaipur to Jobner, especially during late March.

On the fields flanking the nearly 50-km stretch, bundles of freshly cut wheat signal the harvest season. But instead of the golden ears swishing joyfully in the air, one sees a jumble of thread-like roots.

“The grains are actually hidden in the shade of stems,” Nanu Ram Khan daliya who lives in Pachaad village en route to Jobner, explained. I was puzzl ed: in parts of north India, wheat bundles are kept either upright or laid horizontally on the ground. “Why do you keep the harvest upturned?” I asked Khandaliya. The farmer seemed to have been caught off-guard. He could only mutter, “This has been the norm for ages. We don’t know when the practice started.”

But Khandaliya was quick to recover his poise. Stacking wheat bundles upturned gives the grains a better shine and that, in turn, fetches farmers a better price in the market, he said. “Wheat grains dry if kept straight in the blazing hot April sun. But if kept in the shade of the stalks for a day or two, they acquire a bluish shine and turn out solid and round,” said Khandaliya’s 70-something father Chhotu Ram.

At Kunchiawas, another village en route, Kamal Devi Chaudhury had a more elaborate explanation. “When the stalks are kept upended, the ras (juice) in the roots flows down to the grains. We keep the harvest in this position for only a few days. After that the crop is threshed with a machine.” 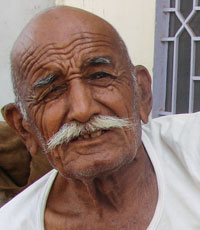 At Jaipur’s wholesale market, Cho mu Mandi, I met another farmer from Chaudhury’s village. Ganpath Singh was returning after selling his produce. The wheat yield of farmers around Jobner is much less than that of their counterparts in the rest of Rajasthan because the reg ion has water problems, he said. But Si ngh’s face was flush with pride as he sa id, “We still get a better price than farmers from other parts of Rajasthan. Trad ers pay us Rs 1,500 to 1,900 for 100 kg whe at while they buy wheat from elsewhere at Rs 1,300 for 100 kg.”

Scientists at Rajasthan’s oldest agricultural college, Shri Karan Narendra College of Agriculture in Jobner, were not too impressed. “People in the villages around Jobner usually sow a variety called C-306. They call it Desi Farmy. Chappattis made of this wheat are much softer. That’s why the Jobner wheat sells at high rates,” L R Yadav, assistant professor at the college’s Soil Science and Agricultural Chemistry de partment, said. He had another explanation for the Jobner practice. “When birds pick at a dry grain pellet, the other pellets in a stalk disintegrate. Keeping the harvest upturned saves it from losses only when the crop is dry.” In fact, keeping the grain upturned for long exposes grains to termite attack, he said.

Not every agriculture expert I met, was dismissive. “It is quite possible farmers upturn the harvest because they want the grain to acquire moisture from the stem,” said M K Mathur, former member of the Plann ing Commission who now works as an agriculture expert at non-profit Social Policy Research Institute in Jaipur.

S M Sharma, a wheat breeder at the government-run Agricultural Research station in Jaipur, said the practice fits in with the requirement of Jobner’s rainfed farming. Wheat produced in rainfed areas must be harvested before it dries because in such areas harvesting is done manually and takes days. If the crop is allowed to dry the grains turn brittle and disintegrate, so the crop has 10-15 per cent moisture when its harvested, he said. “Farmers have to keep it in the field for about 10 days to acquire the correct ma turity before threshing. They cannot always post a guard there to shoo away birds. So they keep it upended. Peo ple in other regions do not resort to this practice because there the crop is threshed im mediately,” he said.

Traders at Chomu, however, swear by the shine of Jobner’s grain. “Farmy is grown in Kuchaman and Nagaur as well, but the Jobner wheat has a distinct hue,” Jessa Ram Chaudhury, a trader from Sitarampur village said. “People who roam around in the sun get tanned. But those who work in shade or in cooler areas, have clearer skin. The same logic holds for wheat. There is money for this shine. There is only a little difference when it comes to taste,” he reasoned. 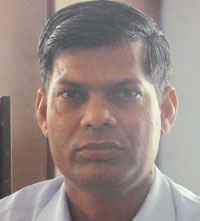 Another trader Ram Sehai Yadav ventured a different explanation. “A wheat plant has 12-15 per cent moisture. When one cuts it and keeps the bundles upturned, gravity makes more nutrients reach the stem. This is true with other crops also,” he said. “A sugarcane stick, for instance, is the least sweet at the topmost section between two nodes. But if the stick is upturned for a day even these parts turn sweet. I am sure a lab test will prove this.”

My conversation with the farmers and traders seemed to have made an impression on Maharaj Singh who had been driving me around Jobner in his taxi. Singh, who belongs to Bharatpur, said, “We grow the same variety. But if merely keeping the harvest upturned can fetch a better price, I would certainly try that out next year.” I will wait for the results.