Singapore may just have discovered a remedy to reduce water wastage at the household level. The city is known for its long-standing efforts at saving water through recycling water and promoting rainwater harvesting. Now, they have started the 'Water Efficient Homes' campaign 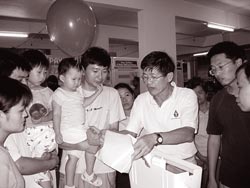 Singapore may just have discovered a remedy to reduce water wastage at the household level. The city is known for its long-standing efforts at saving water through recycling water and promoting rainwater harvesting. Now, they have started the 'Water Efficient Homes' campaign. The Public Utilities Board (pub), the national agency for water supply, resident committees and grassroot organisations are involved in this programme.
The first step Singapore gets its water from local reservoirs, Johor in Malaysia and from ne water, reclaimed water. pub set right their faulty meter connections and wastage in distribution systems before they ventured into a six-month study for the campaign.

Water saving devices (wsd) were used in homes to tackle the issue of wastage through taps and flushes. Thimbles installed at taps and shower hoses, controlled excessive water flow while water saving bags were used for nine-liter flushing cisterns. The success of this study launched the campaign in February 2003.

Commenting on the objectives of the campaign, Prime Minister Goh Chok Tong said, "If we run water-efficient homes, we can lower our utility bills significantly. More importantly, we can complement our national water sources in this process." The movement aimed at generating awareness on water saving habits.
The launch The aim of the pub was to make the project as popular as possible across constituencies in Singapore. Mobile exhibitions demonstrated the use of the wsds.

Paya Lebar was the first constituency to welcome the campaign. Over 3,000 households were given Do-It-Yourself kits consisting of thimbles, cistern water saving bags and flyers on installation procedures and water conservation tips, all free of charge.

"The response has been good. Over 2.5 lakh water saving kits had been distributed, in over 25 constituencies till September 2003 as compared to the target of one lakh kits. This accounts for 29 per cent of all constituencies in Singapore," says Andrew Lim, senior officer with the pub.

Says Uma Sachidhanandam, project manager, Singapore Environment Council (a government body), "The programme is well received not only in homes but also in schools and other institutions."

However, it doesn't look like every house has heard of the campaign. As Anil Kumar, Executive Director, csg systems, puts it, "I am not aware of this initiative, though I know that the government is investing a lot on water conservation".

Constituencies where the campaign was launched were reoriented through regular talks and exhibitions by the pub. These witnessed a large turn-out showing that citizens are keenly interested in this programme.

What difference is the campaign going to make? The installation of the wsd is expected to result in a five to eight per cent reduction in the monthly water consumption for a house (as proven by the pilot studies).

Balaji Sivadasan, minister for health and environment says, "If each home can use every single drop of water wisely, our taps will keep flowing for generations to come."

Journalist Pamela Pang of Today, speaking on the monetary benefits says, "The highlight of the campaign lies in the fact that us $4.56 million could be saved annually, provided all the 2.5 lakh households install wsd."

The effectiveness of this campaign rests, in the last analysis, in taking up the promise of saving water in right earnest. The government's enthusiasm cannot flag. One would require to monitor the results before it can be really declared as a global model. Could such a campaign be possible in India, if issues such as transmission losses, metering and rational water pricing are addressed?