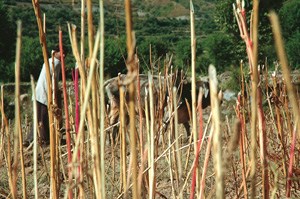 Kundan Lal and his master struck a deal. Lal, the master agreed, could go home to see his ailing wife in Dehradun's Bhatad village. In exchange, he demanded the services of Lal's son and daughter-in-law. Lal explains that someone has to compensate for his absence at his malik's (master's) field.

Lal is a mazdoor (labourer). The malik-mazdoor relationship was sealed when Lal had to borrow money for his son's wedding ceremony. Once the festivities were over, he had to fulfil his part of the deal. That meant working at his master's fields in Rangyon village, about 18 km from Bhatad. Lal was under no illusion the principal, he knew, could never be paid off. Except, he explains, "if I found another sahukar (money lender)". But Lal has made his peace. "At least this master does not beat me up," he says.

Lal is from the Kolta community from Dehradun's Jaunsar Bawar area. Koltas have traditionally been recorded as bonded labourers.They are believed to be autochthonous residents of the area who were dominated by immigrants and bracketed as a low caste. According to a 2002 report by activists Kunwar Prasun and Sunil Kainthola, the social system which barred the Koltas from owning land or entering temples was legalised in the nineteenth century. The system, however, allowed the Kotlas to borrow money from the local moneylenders. Landless and assetless, the community fell into a debt trap (see box Road to debt).
In Jaunsar Bawar, "there are approximately a thousand families which depend on bonded labour," estimates Anmol Jain who recently conducted a study for the International Labour Organization. Kripa Ram Bhatt, secretary of Prakriya, a small ngo working in the region, puts the number of such families at 1,500-2,000.

The state government does not have figures but even it admits that bonded labour continues decades after being officially eradicated. An Uttarakhand government labour official who did not want to be named told this reporter that a survey was conducted in 2002-03 to ascertain the numbers of bonded labourers in Jaunsar and their condition. The report was forwarded to the state's revenue department in 2003 and has not been heard of since. "As per the law, such a report has to be approved by the revenue department within a month, so that release and rehabilitation can begin at the earliest," says the official.
Once a Kolta borrows money, he spends the first few years working for the sahukar to pay back the interest. Till then there is no pay, though meals are usually provided. After that, he starts to work towards settling the actual amount. There are provisions for two sick leaves a month on an average, but the rest are working days. "I get Rs 300 a month for my work, but if I take a day off when the malik doesn't want me to, he deducts Rs 100 for each day," says Chander Kumar, a bonded labour.

If the amount in question is large, more than one member in a family is required to work. And if the original borrower dies without paying back, another family member replaces him. A wife can replace a dead husband, and the debt usually passes from one generation to another. There have been cases where debtors escaped to towns, but they almost always landed back in the village. "What will they do in the city other than labour?" asks Kundan Lal. "If I escape, my family will be made to work. Besides, it takes money to leave too. And if the malik decides to catch you, you have to pay for all his expenses also," he adds.

The Bonded Labour System (Abolition) Act came into force in 1976. Over the next few years more than 8,000 labourers were identified and released in Dehradun district.They were given money and provided with livestock.

Kainthola reports that Rs 55 million was spent on the rehabilitation projects. Additionally, Jaunsar Bawar is a 'tribal area', which means every Jaunsari is categorised as a member of a Scheduled Tribe, and is entitled to government jobs and education.

"The legal provisions are quite sufficient," says Jain. His report, however, lists the problems that has bedevilled the relief and rehabilitation programmes. The strong employer lobby did not allow many labourers to be listed as bonded labourers. In fact, many employers got themselves listed as labourers. Corruption was high in the land allotment process and cattle that was provided was of poor quality, which many sold. Government officials deny all this. But Paripurnanad Painyuli, former mp of Dehradun and social worker says, "The very people who were exploiting the labourers were made in charge of release and rehabilitation." No wonder, no one in this area has been prosecuted under bonded labour laws.

"Thousands of labourers were released but where are they expected to go?" asks Avdhash Kaushal, head of the Dehradun-based ngo, Rural Entitlement and Litigation Kendra. "Loans were waived, but with time, the labourers slowly fell back into the cycle of borrowing when they needed money. Their means of livelihood was simply not sustainable," says Jain. "In fact, many labourers took more loans believing that they would be waived again."


Jaunsar's status as a tribal area means the tribal people of the region are entitled to reservations in government jobs for the region's residents. There are other schemes, too, for tribal development. But, claims Kainthola, "reservation has widened the economic gap". A report by Naresh C Saxena, former member of the Planning Commission explains matters "The entire area has been notified 'tribal'. So, affluent communities have pushed Kolta, Das and Bajgi communities to the periphery".

"There is urgent need to denotify the tribal status given to Jaunsar-Bawar area. Only the Koltas, Das and Bajgi communities should be given tribal status (or at least Scheduled Caste status) along with distributing some of the surplus land among these households", the report explains. But this is a controversial suggestion, considering how contested issues of reservation are.

Villagers were cautious while talking to Down To Earth. "They will not talk about bonded labour, because of the fear of the malik's fear," says Narayan Kumar, a young, educated man in Dhaura village. Lack of community action seems to have frustrated many others like him. "Even if I want to take action against a high caste member, they will get back at me in the gram sabha. My own community will turn against me. Everyone is scared of their maliks," says Suresh Kumar of Pankhet village.


But that is not all. Crimes against women are frequent, though few dare to talk about them. When there were reports in the regional media that raked up some old cases of trafficking, there was an uproar. A source says "The issue is not raked up by civil society organisations because of fear of backlash from the community. Anyway, the issue is not a good source of funding". Kainthola's report lists many cases and the modus operandi of trafficking of women. "Trafficking is as rampant as it earlier was, only the routes have changed today," says Painyuli, who also runs Ashok Ashram, a rehabilitation centre for women rescued from brothels.

Exploitation of women by members of high castes is not talked about. A source says "The panchayats give no justice, so a labourer has no choice but to accept his fate. And a sacrifice for the sake of the entire family is considered to be acceptable."

Mahipa Devi, who was sold off in Delhi when she was a pre-teen, puts it bluntly. "One has to do something to survive," she says, fighting ill-health and depression. For better or for worse, social systems are changing here. Within Pankhet, a Kolta woman tells Down To Earth, "Education is the solution. We send our daughters to school. Even if they cannot become officers, at least they won't be labourers like us".

"Here things are still better; we are a well-connected village with a lot of outside support. But nothing has changed in the interiors. Each woman in these hills has a story to tell," says Mahipa Devi, barely a few houses away.