The process of alienating people from natural resources has not stopped, even with the attainment of statehood 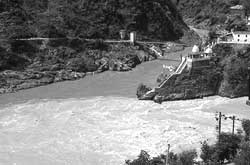 WHILE the first chief minister of Uttaranchal was being sworn in at midnight on November 9, 2000, many leaders who fought for statehood swore to continue the struggle. "It is not over yet," summed up Kamla Pant, a leader at the forefront of the movement and member of the Uttrakhand Mahila Manch. "It is a state born bereft of rights over its own resources," she added.

Uttaranchal was born after one of the longest, but peaceful, movements for statehood. All this despite state repression. As in the case of Chattisgarh and Jharkhand, the root cause was people's receding rights over their natural resources. "People watched the ruthless exploitation of their resources - forests, water and land - by the government and rose in unison to claim what was rightfully theirs," says Anil Joshi of the Himalayan Environmental Studies and Conservation, a Dehradun-based NGO.

But considering the natural wealth of the state, it is anomalous that more than 70 per cent of the state's seven million people live close to or below the poverty line. Uttaranchal has a forest cover of 2.3 million ha, which is 43 per cent of the total geographical area. It is also endowed with the Ganga whose watershed spreads across 105 million ha. "For years, people managed their resources sustainably. But successive governments looked upon the forests as only a source of revenue. They took away the people's rights. The Chipko movement, led by the women of the region, was a backlash to this process of alienation," says Avdhash Kaushal, director of the Rural Litigation and Entitlement Kendra, another NGO based in Dehradun.


Unfortunately, the process of alienation has not halted with attainment of statehood. Sunder Singh Panwar, a resident of village Hatnali in Uttarkashi, looks at the river Bhagirathi flowing along the road he walks and exclaims in anguish, "How can people in Delhi and UP decide what is to be done with the waters of Bhagirathi?" The incredulity is visible on his face. He has just been told of the new dispensation under which the Ganga Water Board will manage the river and its tributaries - a ploy to steal Uttaranchal's real wealth, agree many ministers in the new cabinet.

Under the Uttar Pradesh Reorganisation Bill, 2000, the board will manage projects regarding "irrigation, rural and urban water supply, hydropower generation, navigation and industries". A resident of the state cannot set up even a small micro-hydel plant without prior permission from the board. Bachan Singh Panwar, Sundar's father, is disappointed. He owns a gharat (water mill) that he wanted to use to generate power for his entire village. "The nearby villages have electricity. I have often dreamt of bringing electricity to my village. But it's the same bureaucracy at work again," he says.

According to Anil Joshi, Uttaranchal has 70,000 gharats, each capable of generating five kilowatt (KW) of energy. "If the state is able to integrate them on to the grid, it will not have to depend on large dams to meet the power demands." Currently, the watermills are suffering from neglect. Many have closed down. State of art technology is needed to salvage them.

Water resources must belong to the people, says Joshi. "Otherwise what is the justification for creating a new state?" he questions. But Uttaranchal seems to have lost control over its resources even before its formation. When quizzed about the issue, Harbans Kapoor, a senior member of the Legislative Assembly, says, "I do not know of gharats." Nirupumma Gaur, state minister for urban development, is no less ignorant, while chief minister Nityanand Swami of the BJP said the matter would be reviewed soon.

Just before the creation of the new state, the UP government signed a deal for setting up as many as 33 hydel power projects. "Uttaranchal will not earn from the projects already under construction. It will get only a small percentage of the electricity produced," says an exasperated Kamla Pant. According to Manohar Kant Dhyani, a senior BJP leader, projects in Tehri, Vishnuprayag and Srinagar were sold to private contractors. Enron is the main contractor for the Srinagar project. Media reports point to the 80 ha of fertile land that was given away for pittance for the project.

Dhyani is aware of the perils of continuing with the arrangement. "The people of Uttaranchal will not accept this," he says. But Munna Singh Chauhan, a senior politician from the tribal Jaunsar region, says, "Why did the BJP MLAs not protest at the time of passing the bill? It shows their lack of vision. We gave away our rights on a platter. Clause 79 and 80 of the bill (relating to the board's powers) negate the sacrifices made by those who fought for statehood." Babu Ram of village Lakhamandal in district Chakrata, which is Chauhan's constituency, says, "Every household pays a bribe of Rs 20 per month to the local official at the electricity department to draw power, though it gets switched off between six and eight in the evening. What is stopping the government from providing us the basic requisites - water, electricity, road connectivity and rights to forests?" He doesn't know his political representatives have bartered his rights. But he is among the fortunate ones. He has a perennial water spring in his village and a municipal supply line. More than 3,500 villages in the 13 districts of the state do not have drinking water.


Saroj Onial, a retired professor and an active participant in the Uttrakhand movement, the traditional name of the Garhwal-Kumaon region, was among those who lit lamps to celebrate statehood, albeit with a heavy heart. "Our new government has not shed the character of UP's political culture. They squabble over offices and portfolios. They fail to realise the burning issues of jal, jungle and jamin (water, forests and land)," she says. Dhyani believes migration is the issue. But experts such as B K Joshi, executive director of Centre for Himalayan Development and Policy Studies, a Dehradun-based NGO, says, politicians need to realise that these issues are all interrelated. "You cannot work on solving them in isolation," he says.

Kamala Pant sheds some light on the issue. "Half the region's sown area is not irrigated and productivity is low. More than 65 per cent of the landholdings continue to be of less than one ha, that too often scattered over the landscape, rendering agriculture arduous," she says. At the same time, people have no rights over the forests. The state needs to denotify the reserve forest area so that the people can have alternative source of income from the forest produce, she says. But there are allegations, even from officials in the chief minister's office, that the government is driven by an agenda written by contractors. They say, many of the ministers are known forest or building contractors, others have strong links with the liquor mafia. "How can you expect the murderer to protect the victim?" they ask.

"It is not we politicians but the women and men like Chandi Prasad Bhatt, who have kept the natural resources intact we so proudly proclaim as 'potential source of revenue'. But the new government has forgotten them," says Chauhan. The forest cover is fast dwindling and continuously under pressure from timber smugglers under political patronage and a corrupt forest department, says Kaushal. If the forests are being protected, it is not because of forest officials. "We can do without some of the 54 Indian Forest Service (IFS) officers in Uttaranchal," says Matwar Singh Kandari, a minister in the new cabinet. Earlier, the forest officers were 'portioned' off to manage, for instance, 100 ha of forests. After statehood, they were divided according to the percentage of forest cover in the two states because of which Uttaranchal has got the lion's share of the cadre. Now there are nearly twice the number of officers to manage each 100 ha of forest land, says Kaushal. A senior bureaucrat observes, "The Indian Administrative Service officers did not wish to join the new Uttaranchal cadre, but IFS officers lined up to apply. They are lured by the money that can be made from the forests here," says Kaushal.

The World Bank-funded joint forest management programme, in the meanwhile, claim experts and foresters alike, has been an eyewash. It has eroded the traditional systems of managing forests, without giving any benefits to the people. An IFS officer, wishing to remain anonymous, says the revenue sharing structure has made the programme a failure. It also allows the forest department to say that people cannot manage their forests.

Ironically, Mohan Singh Rawat Gaonwasi, minister in the new government, narrated at a public forum the story of a group of women in the Makkumath village in Chamoli district protecting their forests by guarding it 24 hours a day. At the same forum, Meema Devi of village Jakholi in Uttarkashi demanded traditional rights over the forests in her gram panchayat. The chief minister, who was present at the gathering, promised her. But in the interview to Down To Earth, he shied away from asking for an amendment to the FCA, while talking about handing the forests back to the people. He is obviously unaware of the fact that any amendment, if necessary, will have to be carried out by the Centre (see interview: I want to hand over the forests to the people).


FCA and other proclamations of the Union government are going to upset the apple cart for Uttaranchal. Trade in herbs alone has a potential of at least Rs 150 crore annually, says Vijay Prasad Bhatt, a scientist at the Herbal Research and Development Institute at Gopeshwar in Chamoli. The ministers acknowledge that it is a big revenue earner but none of his ilk mention that the true bearers of knowledge of these herbs, communities like the Bhotias, for instance, should directly benefit from their expertise. Bhatt says, "These people have been forced into illegally selling herbs to large companies. If the government had utilised their expertise legitimately why would they have become smugglers and thieves?"

Bhatt says there is no check on which herbs are uprooted and sold off. Swami is sure that the biodiversity and herb variety will enable the state to be one of the largest exporters of herbs in the country. But to do so detailed research is needed. "Let us not be rhetorical," quips Bhatt.

Ministers and MLAs talk of acting fast to save herbs from being exploited by outsiders at the cost of the local economy. But no logistics or plans are forthcoming yet. Hemvati Nadan Mamgain, representative of Dhad, a Dehradun-based NGO, says, "Our future is determined by our geographical limitations and our natural endowments. I hope this new polity can understand the nebulous link between natural resources and development better."

Adds Chauhan, "All we politicians have to do is listen to the wisdom of our hill women and be guided by the actions of men like Chandi Prasad Bhatt."