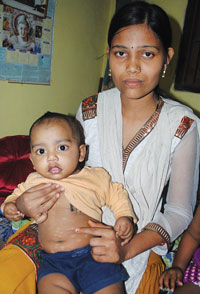 Ajay and Pooja Naik lament the day they took their child for a special vaccination programme. Soon after Yathartha’s birth last year, Ajay learned that a government hospital in Indore in Madhya Pradesh was offering vaccines against many diseases, including polio, H1N1 and hepatitis, for free. What he did not know was, pharma firms were conducting vaccine trials in Chacha Nehru Bal Chikitsalaya.

Inadvertently, the couple took Yathartha to the hospital. The very next day, he had white patches all over his body. Worried, they rushed back, only to be told to change his soap. The parents complied, but the patches kept growing. They again approached the hospital. This time the doctors gave him some medicines. It has been eight months and Yathartha is still undergoing treatment. “We were asked to fill up a form. It was in English. They said it is just a formality and my child will be free from diseases,” said Pooja, who has studied till class five. “I do not know what to do now. I do not want my child to grow up with these patches,” said Ajay, a class 10 pass with no employment.

He has spent around Rs 15,000 on his child’s treatment. “I feel cheated. Just because we are poor does not mean they can buy our lives.” Like Yathartha, about 2,000 children have been subjected to vaccine trials in Indore, according to Mahendra Hardia, the state health minister. Many of them have fever, rashes and boils.

After learning about Yathartha, Anand Rai, a public health activist, filed a right to information (RTI) application seeking details of the vaccine trials from Chacha Nehru Bal Chikitsalaya. According to the information accessed, the vaccines contained certain chemicals, which were toxic in nature (see ‘Disputed chemicals used in vaccine trials’). 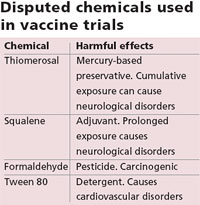 But Hemant Jain, professor at the department of paediatrics at Chacha Nehru Bal Chikitsalaya, said the trials have been permitted by the Drug Controller General of India (DCGI) and none of the chemicals used in the vaccines has side effects. “Most of the trials are in phase three and four. Some of the vaccines are widely available in the market,” added Jain.

Pharma firms that conduct clinical trials have to submit a report on the adverse effects of vaccines used to the hospital concerned. Rai filed a second RTI application last October asking Chacha Nehru Bal Chikitsalaya to give details of the side effects as submitted by the firms. He is awaiting a reply. “Under RTI rules reply should come within 30 days. I do not know what is taking so long,” Rai said.

The vaccines contained thiomerosal, squalene, formaldehyde and tween 80. “There is no scientific evidence to prove the safety of these chemicals,” said Rai. Thiomerosal, for example, is a preservative added to provide stability to a vaccine. It is 50 per cent mercury by weight. “Though thiomerosal is not harmful in trace amounts, its cumulative exposure through multiple doses causes neurological disorders,” said Ajay Gambhir, a member of National Accreditation Board for Hospitals.

In the US, vaccines meant for sixyear- olds and younger children have no or very small amounts of thiomerosal per dose (0.5ml). Russia, Denmark and Austria have completely banned its use. When it comes to India, the permissible limit for thiomerosal is 25-100 microgramme per dose. “The developed world advises against the use of thiomerosal,” said Rai, “and India allows it with such relaxed standards.

This is what causes health problems.” (See ‘Heavy metal’, Down To Earth, April 15, 2006) In India, standards for additives either do not exist or are very relaxed. “Like in the case of squalene, formaldehyde and tween 80,” Gambhir said. Squalene is an adjuvant, which boosts the body’s immune response to a vaccine, but there is no set permissible limit for it in India. 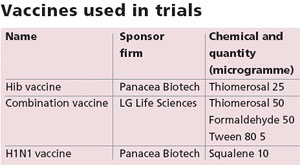 In the US its use is banned. Formaldehyde, used to inactivate viruses and bacteria in vaccines, and tween 80, which reduces surface tension, are used both in and outside India. While India has not set standards for the two, the US Food and Drug Administration (FDA) has restricted their use. DCGI did not respond when permissible limits for squalene, formaldehyde and tween 80 were enquired by Down To Earth.

The RTI reply by Chacha Nehru Bal Chikitsalaya states no difference between the chemicals. “They have been clubbed under a single category of adjuvants. This is shocking,” Rai said. When Down To Earth asked why the chemicals were used in the vaccines, the pharma firms gave no answer.

“Why harmful chemicals that are not permitted in developed countries are being tried on our children?” asked Paras Saklecha, an MLA from Ratlam district in Madhya Pradesh, in the state assembly in July 2010. The state government responded in October by putting a stay on fresh trials in Madhya Pradesh but did not halt ongoing trials. It also constituted a committee to investigate and report the use of adjuvants and preservatives in the Indore vaccine trials. The committee’s report is awaited.

The main problem is the relaxed public health regulation system, according to T Jacob John, former head of the department of virology in Christian Medical College in Vellore, Tamil Nadu. “Besides, India does not have a vaccine side effects reporting system like Vaccine Adverse Event Reporting System used in the US,” said Rai.

Cost is another hurdle. Most of the vaccines manufactured or used in India are in multidoses for which preservatives have to be used. “A manufacturer finds it economical to make a multidose vaccine than a single-dose vaccine,” said John. In developed countries singledose vaccines are preferred to avoid use of preservatives.

Jacob Puliyel, the head of the department of paediatrics at St Stephen’s Hospital in Delhi, reckons the solution lies in finding harmless alternatives by investing more in R&D.

At present, aluminium hydroxide is used worldwide as an adjuvant in vaccines against diseases like hepatitis, polio, tetanus and cervical cancer. Now an institute in Delhi has developed a one-of-a-kind herbal adjuvant.

Brainchild of Defence Institute of Physiology and Allied Sciences (DIPAS), a research lab of Defence Research and Development Organisation in Delhi, DIP-HIP is made from the leaves of seabuckthorn, hippophae rhamnoides, commonly known as Leh berry. Native to Mongolia and Siberia, seabuckthorn is a hardy shrub abundantly found in dry temperate region and cold deserts like Leh and Uttarakhand in India. “DIPHIP can replace the current adjuvants,” said Virendra Singh, consortium principal investigator of a World Bank’s project on seabuckthorn.

Lily Ganju, a part of the research team that developed DIP-HIP, said, “A herbal adjuvant is safer and more effective.” No side effects were reported when DIP-HIP was tested on animals. It is a better option than aluminium hydroxide, which causes side effects like fever, rashes and inflammation, said Ganju.

Other benefits of DIP-HIP include its shelf life, which is three years compared to aluminium hydroxide’s four months. Bharat Biotech, a pharma company in Hyderabad, recently manufactured the country’s first thiomersoal-free vaccine for hepatitis B.

The company did not reveal the alternative used to make the vaccine despite repeated requests. 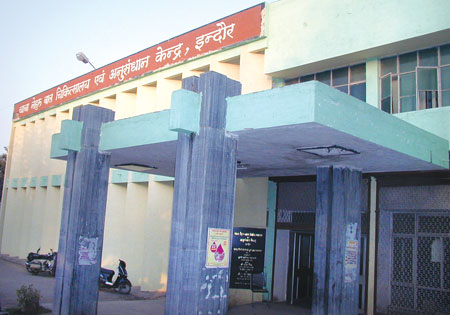