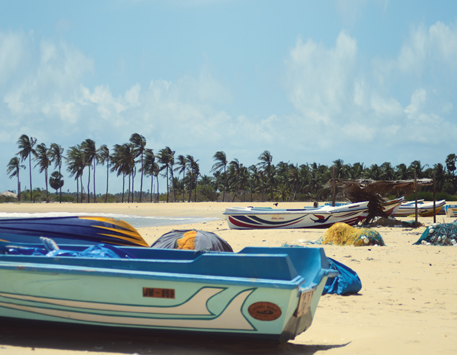 COCONUT palms line the unending stretch of white sand. A few boats of fishers bounce on the blue waters. Strong waves crash against the fragile shore. Welcome to the virgin beaches in Kalpitiya along Sri Lanka’s northwestern coast. But the untouched beauty of this 1,700-hectare (ha) peninsula in Puttalam district may not remain so for long. One can already see an occasional bike, or a tourist’s car packed with surfing gear.

The Sri Lankan government has a mega tourism development plan for Kalpitiya, which includes 14 islands along the Dutch Bay and the Portugal Bay. The peninsula was declared a potential tourism belt in 2008. Sensitive ecosystems like mangroves, salt marshes, lagoons and coral reefs abound here. The Bar Reef Marine Sanctuary spreading across 30,700 ha, notified in 1992 by the Department of Wildlife Conservation, is not far. Besides Kalpitiya town, four islands—Mahoththuwaran, Uchchamunai, Rodhapadu and Kirimundal—will be completely taken over for tourism development.

According to the master plan, there will be big resorts, golf courses, horse riding areas, entertainment and cultural zones, theme parks and marine drives. Some extremely sensitive islands—Bathhalangunduwa, Palliyawatta and Vellai—will be developed with limited facilities such as small eco-tourism resorts and fishing camps. The master plan, which skips the issue of displacement, proposes to lease out these islands.

About 86,000 people live in Kalpitiya, states the 2012 census. Of these, more than 10,000 do fishing to earn a living. But no one has explained the master plan to fisherfolk. “We have some idea about it from rumours. We hear our land will be acquired but there is no communication from the government. Some islands may be fully reserved for investors,” says Sanaka, a young fisher of Kalpitiya. 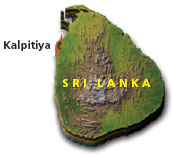 An international fact-finding mission set up to study the ramifications of development in Kalpitiya states in its report that the entire fishing community faces the threat of displacement. The mission, which had members from India, Nepal, Sri Lanka and Thailand, states the project must be immediately discontinued. The livelihood of people should not be disturbed on any account, the report states.

Government officials say the focus is only on eco-tourism. “We are not permitting big hotels here right now,” says U H Wanniarachichi of the country’s Coast Conservation Department (CCD). But the master plan in the possession of Down To Earth clearly states that the area will have six-star hotels. The country’s most expensive hotel chain, Dutch Bay Resorts, has already started operating its first phase. It will invest US $175 million on this project, which will have 130 luxury villas in Kalpitiya. Besides this, CCD has granted environmental clearance to two hotels in Mahoththuwaran. At present, five more applications for hotels are pending with the department.

The master plan of the project recommends tourism-related activities beyond 20 km from the Bar Reef Marine Sanctuary. But tourism activities such as scuba diving, snorkeling, wind surfing, kite boarding and dolphin watching have already started within the core and buffer zones of the sanctuary.

Marine tourism activities are being run through village-level societies. For instance, three villages have formed a society in Kandakuliya village under which 20 boats operate at a given time. Everyone is given an annual permit. The tourism board monitors this system. While the wildlife department charges an entry fee of US $8 from foreigners for the Bar Reef, local boat operators charge Sri Lankan Rupee (SLR) 12,000 for a round trip to the sanctuary. 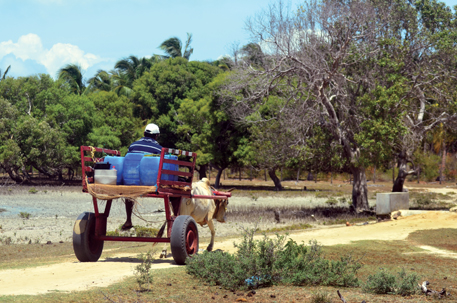 The Bar Reef sanctuary needs to be conserved. Fisherfolk in Kalpitiya realise this. “The corals are our asset. Ten years ago, we did not earn anything during off-season. Now, we earn our bread and butter during this time because of corals,” says Sanaka. “We cannot allow them to be destroyed.”

People use boats run on kerosene for ferrying tourists to see the reefs and the corals. Kerosene can get into the water and affect the health of the Bar Reef. Arjan Rajasuriya of Internat- ional Union for Conservation of Nature in Sri Lanka says tourists can damage the reefs by trampling them. “One society has taken up the cause of conserving the Bar Reef,” says fisher Lance of Kandakuliya village. “Protecting the bar reef sanctuary is the responsibility of the wildlife department. But it does not care,” he says.

Mahoththuwaran already has two hotels. Fishing in this island happens at the adjoining lagoon. Fisherfolk swear by the abundance of fish, claiming daily catch of 300 kg to 350 kg. “During fishing season, we make SLR 200,000 to SLR 250,000 (or SLR 35,000 to SLR 45,000 per month),” says Kumar Miranda, a fisher. “During off-season, men work in the two hotels. Women now always work at these hotels so we get additional income. The hotels are not troubling us yet. We are fine with them,” he adds.

Fisherfolk are happy to get SLR 25,000 salary per month during off-season. “The fishing season lasts about six months. If we wish to continue fishing, we have to migrate to east coast,” says Sugath Emmanuwel, fisher in Kandakuliya. “If tourism develops, we can stay here.”

Sugath says tourism will be an attractive alternative livelihood. It will provide higher income without the need for extensive training. “Fishers in Kalpitiya are lucky to earn from tourism-related activities when they cannot go fishing,” he says. But that is only an alternative during the non-fishing season, says Ajith of Kandakuliya village. “Whoever comes here talks about the benefits tourism will bring. No one ever talks about the problems,” says Miranda. He is concerned that with hotels and tourists, free access to the beaches and fishing may be curtailed.

Most coastal communities in Kalpitiya fear this. When hotels are built, owners usually do not allow fishing activity on nearby beaches. The ones which allow it, restrict fishing only to a few designated areas. “This makes it impossible for us to practise our traditional profession, which requires a large area to spread one net,” says Ajith.

What’s also worrying people here is that the already scarce drinking water may not be available to them at all in future. At Mahoththuwaran, people buy drinking water because it is not available on the island. “I pay SLR 200 per month to someone who brings water for me from the mainland,” says Miranda. “I hope the government has taken into account the impact such an extensive tourism development project will have on the already dwindling water availability in the area,” he says. But it seems unlikely. The government has considered neither the fragile ecosystem nor people’s livelihood in its rush to build the mega development project.