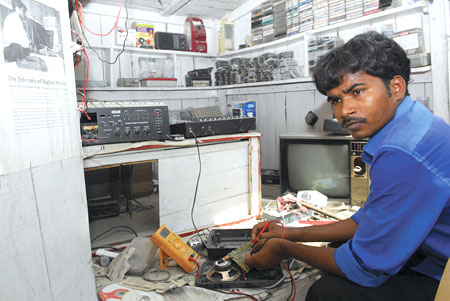 It took two two-and-a-half-metre bamboo poles and a small transmitter worth Rs 50 to start Radio FM Mansoorpur in Bihar’s Vaishali district. The radio station, started in 2002 by Raghav Mahato, a radio mechanic, shut four years later because he did not have a licence.

Mahato, now in his late 20s, did not know he needed a licence and a government approved transmitter to run a radio station till a team comprising CBI and information and broadcasting ministry officials raided and sealed his radio station at Mansoorpur village. He could not afford a transmitter, which costs Rs 3.5 lakh. Even now, he does not have money and is thinking of joining a brick kiln as a daily wager.

His financial condition notwithstanding, Mahato is famous. NCERT (National Council of Education, Research and Training) devotes a chapter, Social Change and Development, to Mahato in its sociology textbook for class XII. Mahato, though, has no inkling that students across the country are drawing inspiration from his innovation. “Everyone has exploited me. I am leading a life of penury,” he said when he learned of the chapter on himself. He would do anything to go back to the good old days of Radio FM Mansoorpur, he said.

Within two weeks of its launch, he recalled, villagers flocked to his radio station to air messages about missing cattle, panchayat meetings and even wedding dates. The radio helped trace six missing kids and three buffaloes in its four years of existence. It also played popular numbers in Bhojpuri and Hindi, sometimes on demand. “It was healthy entertainment for us. We nearly controlled our drinking habit,” said Laxman Rai, a 42-year-old farmer who would go to Mahato with his list of favourite songs everyday after dinner.

The popularity of the radio station became its undoing. When the team of officials raided Mahato’s shop, they said the radio station was illegal and that Mahato was a threat to national security. Mahato could not comprehend the allegations. The team insisted on Mahato’s arrest, but the officer-incharge at the local police station came to his rescue. He was a fan of Radio FM Mansoorpur and would regularly send his list of Bhojpuri songs.

Mahato was told about the need for a licence and the transmitter atop a bamboo pole on the district hospital was brought down. That is how the station’s life ended, Mahato said. It had taken him three days to make the transmitter, the idea for which he had got while repairing radio sets, he added. Non-profits tried to help him get a government approved transmitter but in vain. Frustrated with the turn of events, and with no job in hand, he moved to Tilonia village in Rajasthan’s Ajmer district. There, he trained physically disabled women in repairing radios at Barefoot College, an NGO. But that proved unviable. The college gave him Rs 100 per day and free accommodation.

He continued in the hope of a raise, which never came. He quit last year because of financial problems back home and returned to Mansoorpur. Since his return he sought help from different quarters, including local leaders, but nothing worked out. “I am a poor MLA and unable to help,” said Basawan Bhagat, former legislator from Bhagwanpur. “We miss the radio station,” he added. Shivnath Sharma, a cricketer who organized matches in Mansoorpur said with the radio gone, live commentary is not possible anymore.

“Tournaments now seem dry,” he said. Mahato wants to start community radio. He knows the rules now, he says, but he does not have Rs 3.5 lakh. More than that, he is worried about clearing a debt of Rs 10,000. And provide meals for his family.